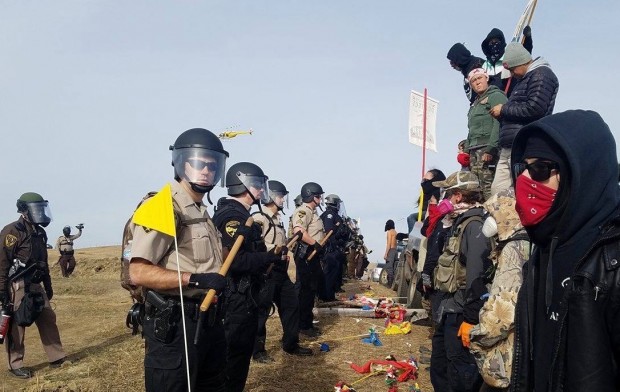 Wounded Knee III In The Making?

Above Photo: Law enforcement is there to protect a pipeline schedule. Water protectors are there for water. And treaties. And justice. (Photo by Dallas Goldtooth via Facebook.)

The struggle at Standing Rock, North Dakota, between the Sioux people and their supporters and the oil corporations and banks trying to run a dangerous pipeline for filthy Bakkan crude oil through their sacred lands and underneath the Missouri River was cranked up to a new level of violence Sunday and in ensuing days as National Guard troops and the Morton County Sheriff’s Department, bolstered by volunteers from various other police departments conducted an all-night attack using maximum violence, including flash-bang concussion grenades, rubber bullets, mace, teargas and three water cannons — this at a time the temperature on the prairie had fallen to a low of 22 degrees fahrenheit.

The casualties of this one-sided battle against peaceful protesters on a bridge were enormous, with some 300 of the estimated 400 protesting water protectors, both native people and non-native supporters, injured, 26 of them seriously. There was evidence that police were aiming rubber bullets at protesters’ heads and groins to inflict maximum pain and damage, with eight of the injured hospitalized, including a 13-year-old girl shot in the face, whose eye was reportedly damaged.

The gravest injuries were a tribal elder who suffered a cardiac arrest, and Sophia Wolansky, a 21-year-old New York City resident who had come to back the Standing Rock Sioux in their struggle to halt construction of the pipeline. She was hit in the arm by a flash-bang grenade thrown at her by a Morton County Sheriff’s deputy, which blew up on impact, blowing away the flesh and muscle and reportedly some of the nerves and bone of the elbow joint. She has been evacuated to a hospital in Chicago where physicians and nurses are fighting to save her arm and hand from an amputation.

Wolansky’s father Wayne, a 61-year old lawyer in New York, angrily called on President to put a halt to the violent repression at Standing Rock. He said of his daughter’s injury, which was the result of a flash-bang concussion grenade being thrown directly at her, “This is the wound of someone who’s a warrior, who was sent to fight in a war,” Wayne said. “It’s not supposed to be a war. She’s peacefully trying to get people to not destroy the water supply. And they’re trying to kill her.” Concussion grenades are not supposed to be used to target people.

The attack on Sunday night, which has been rightly condemned by UN human rights observers as an atrocity, harks back to the simultaneous country-wide crushing of the Occupy movement occupations in cities across the US during early November, 2011, when local police aided in some cases by armed federal parks police, assaulted occupiers with maximum violence, almost always at night, barring the media from witnessing their deliberate and coordinated over-the-top violence.

In that case, an aggressive campaign of legal discovery by the Partnership for Civil Justice using the Freedom of Information Act, resulted in the unearthing of documents from both the Department of Homeland Security and the FBI proving there had been a concerted campaign by those federal agencies to coordinate the crushing of the Occupy Movement. That campaign urged police to use maximum violence, to operate at night, and to share the results of their attacks with other city police departments so that tactics of repression that “worked,” could be replicated.

It would appear that the repressive lessons learned by police agencies in 2011 are now being used as a kind of repression handbook by Morton County Sheriff Kyle Kirchmeier and his deputies against the protesting Sioux water protectors and their Anglo supporters.

There is no indication that such vicious repression is working though. Even as the brutal assault last Sunday night and Monday morning sent dozens of people to area hospitals, more brave people continued to pour into Standing Rock to support the struggle of the Standing Rock Sioux and the many representatives of some 300 US tribes around the country, and the representatives of indigenous peoples from around the world fighting this battle.

The decision to run the so-called Dakota Access Pipeline through Sioux sacred lands, some of it formerly awarded to the Standing Rock Sioux Tribe by US treaty, but later stolen from them, stands in stark contrast to an earlier decision to reroute it from a planned Missouri River crossing point near North Dakota’s capital city of Bismarck. There, protests by the local (white, middle-class) public forced a rethink by the companies behind the pipeline, and the US Army Corps of Engineers. They decided to alter the planned route to run it through Indian territory instead.

The Standing Rock Tribal Council has called on President Obama to put a halt to this dangerous and obscene project, suggesting that as president he has the power to declare the crossing site a National Historic Site, thus protecting it from such defilement. The president, of course, could also look at the local Sheriff’s repressive and and violent tactics against an Indian people, and simply federalize local National Guard troops, ordering them to force local police to stand down instead of follow the Republican governor’s orders to participate in the repression.

That he hasn’t already done so speaks volumes about this president’s lack of courage and of principle. In 2014, President Obama visited the Standing Rock Sioux, and acknowledged their centuries of abuse by the US government. Now, however, that abuse is occurring on this president’s watch, and incredibly, despite the extent of the violence, he has done nothing to stop it.

It’s time for all decent Americans to take a stand in support of the Sioux People of Standing Rock. Contact the White House at 202-456-1414 and demand that the president send troops to stand between Sioux water protectors and their local law-enforcement assailants, and to have Federal Marshals arrest those who commit acts of brutality.

The militarized response to peaceful protest at Standing Rock should stand as a warning to all who would protest America’s slide into totalitarianism. What the government will do to Native Americans and their Anglo supporters today is what we can probably expect them to do to any of us who protest in this new Trumpian America.

The corporate media meanwhile, have been for the most part shameless and useless in this enormous conflict between native people and the state. Even as local sheriff’s deputies launched what appears to be building into a third Wounded Knee-style massacre at Standing Rock, the press keeps referring to a “confrontation” between protesters and law-enforcement, as though it is a battle being fought between equals. NPR yesterday ran with a story that referred to the Standing Rock challenge to the pipeline as “a magnet for activists.”

The NPR reporter might more honestly have called it a “magnet for police” since many of the “law enforcement” thugs attacking the peaceful water protectors are volunteers from neighboring states’ police departments — people anxious for a chance to play “cavalry” in this latest iteration of America’s murderous history of Indian Wars.