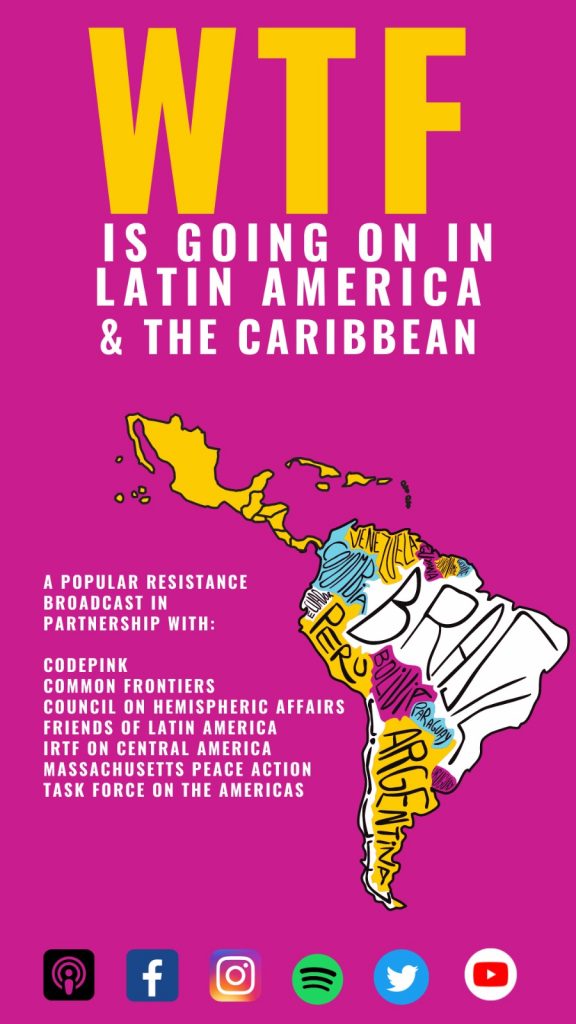 Welcome to WTF is Going on in Latin America & The Caribbean, a PopularResistance broadcast featuring hot news out of the region with host Teri Mattson. Each weekly episode features a country and/or issue related to the affects of U.S. foreign, economic and/or military influence and intervention in the hemisphere of The Americas. Our guests include academics, policy-makers, journalists as well as activists recognized for their groundwork within local communities and movements.

WTF is Going on in Latin America & the Caribbean broadcasts Thursdays at 4:30pm PT/7:30pm ET on multiple live platforms including: CODEPINK YouTube Live, TheConvoCouch and Facebook Live via PopularResistance.org You can also find us on Apple Podcasts, Spotify, Telegram and RadIndieMedia.com

WTF is Going on in Latin America & the Caribbean broadcasts in partnership with CODEPINK, Common Frontiers, Council on Hemispheric Affairs, Friends of Latin America, InterReligious Task Force on Central America, Massachusetts Peace Action and Task Force on the Americas. Learn more about how to become a WTF Broadcast Partner here. 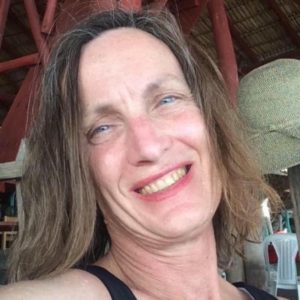 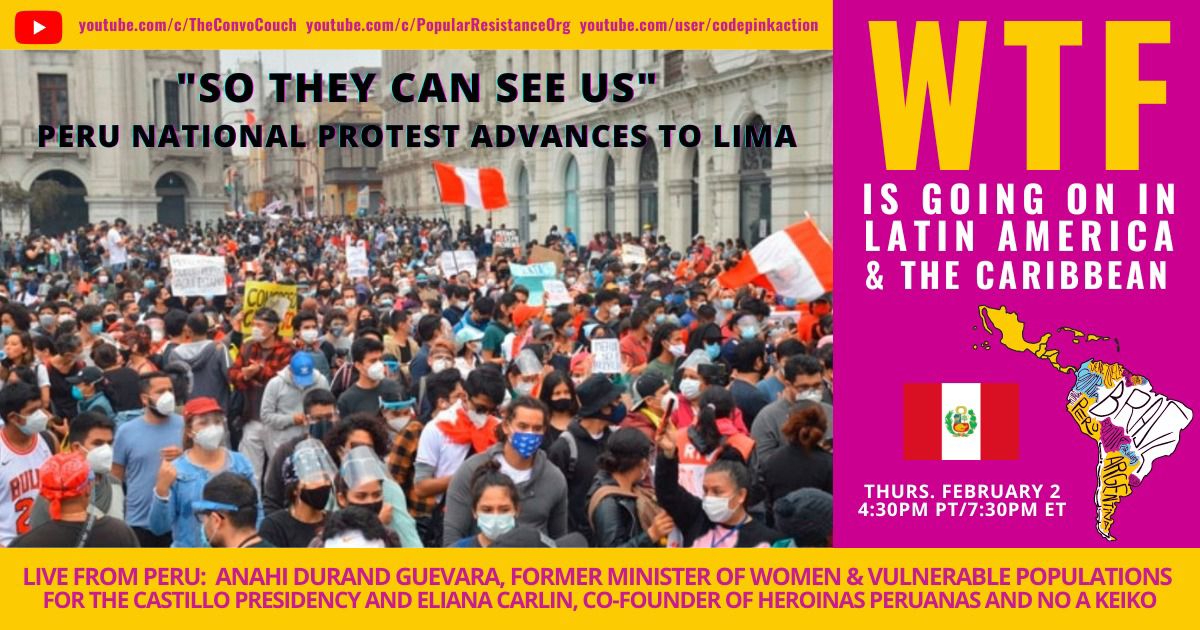 ‘So They Can See Us’: Peru’s National Protest Advances To Lima

Dec 7, 2022: The surprise winner of the July 2021 presidential election, Castillo comes under immediate attack from the right.  On December 7 he attempts to dissolve Congress before it can debate a third impeachment motion against him and says he will form an emergency government and rule by decree.

Dec 7: Lawmakers vote overwhelmingly to remove him from office for “moral incapacity” to exercise power.

He is arrested for “rebellion”.

She says she intends to serve out the rest of Castillo’s term, until July 2026.

The United States pledges to work with Boluarte. 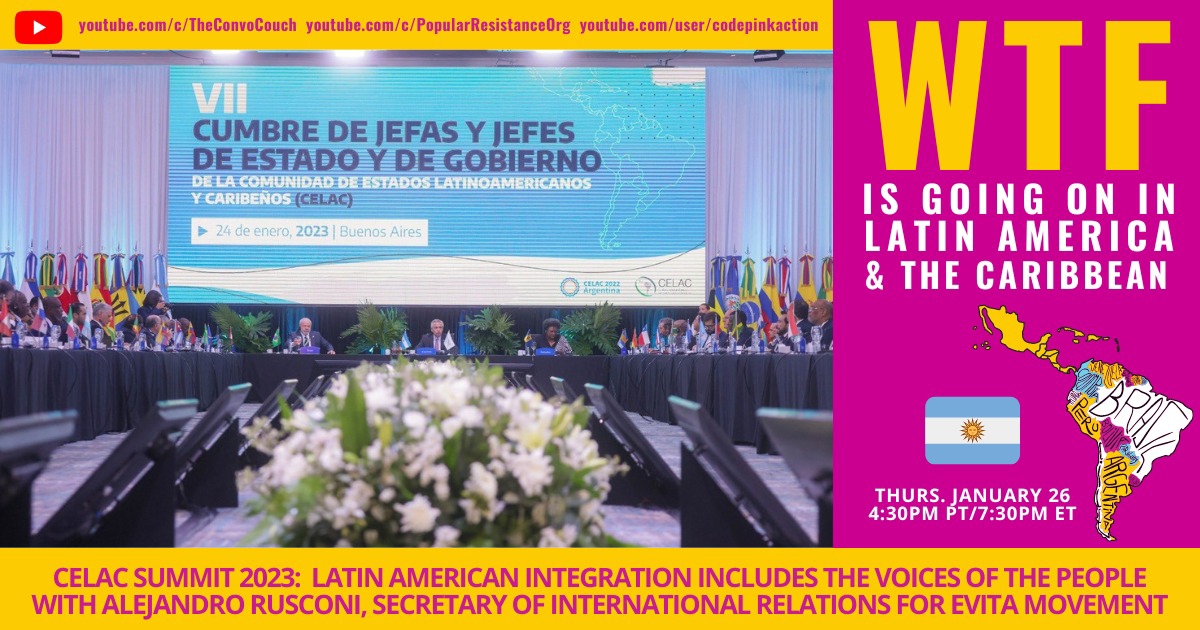 CELAC 2023-Latin American Integration Includes The Voices Of The People

Founded in 2011, CELAC, or the Community of Latin American and Caribbean States, is a multilateral group of 33 countries from across the Western Hemisphere that excludes Canada and the United States It was created to be an alternative forum for Latin American countries. Inaugural leaders, such as Venezuela’s Hugo Chávez, envisioned the group as a counterweight to the Washington-based Organization of American States (OAS), which they viewed as dominated by the United States. CELAC, unlike the OAS, allows Cuba to be a member. Its stated goals are to promote regional integration and cooperation. CELAC represents 600 million people. 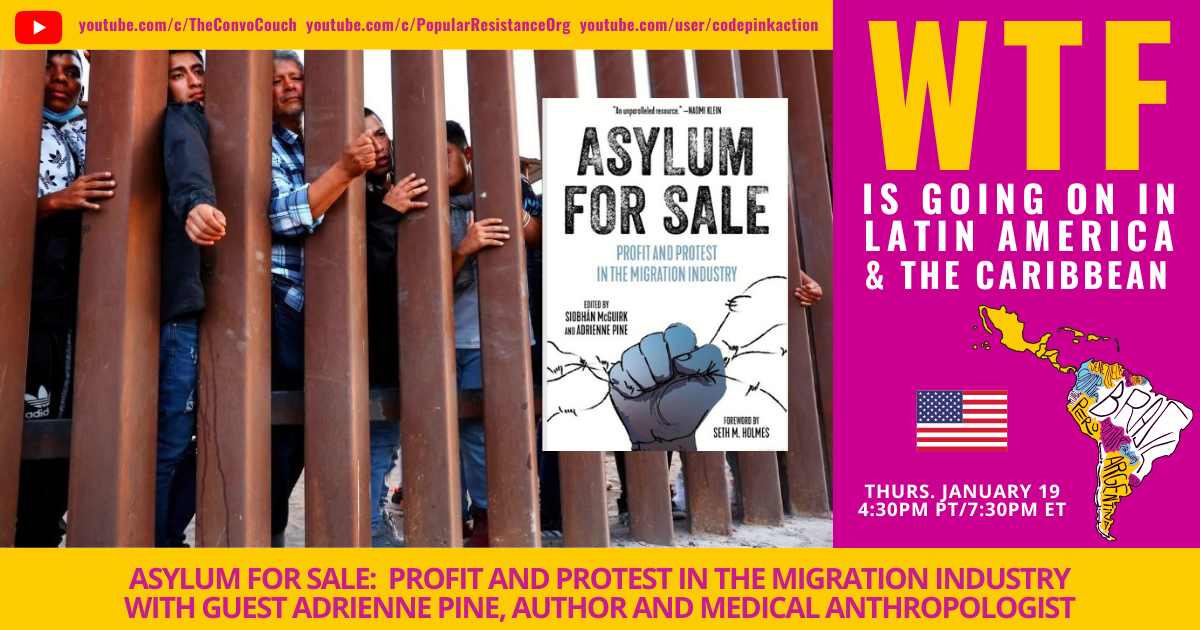 Asylum For Sale, Profit And Protest In The Migration Industry

On the heels of last week’s North America Trilateral Summit, from which not much changed within the migratory system, today’s episode will focus on migration as a for-profit industry which has turned migrating humans into commodities.

Our guest Adrienne Pine is co-editor of the book Asylum for Sale:  Profit and Protest in the Migration Industry published by PM Press in November 2020.  Here is brief description:

Through essays, artworks, photographs, infographics, and illustrations, Asylum for Sale: Profit and Protest in the Migration Industry regards the global asylum regime as an industry characterized by profit-making activity: brokers who facilitate border crossings for a fee; contractors and firms that erect walls, fences, and watchtowers while lobbying governments for bigger “security” budgets; corporations running private detention centers and “managing” deportations; private lawyers charging exorbitant fees; “expert” witnesses; and NGO staff establishing careers while placing asylum seekers into new regimes of monitored vulnerability.  Humanity is not for sale, and no one is illegal. 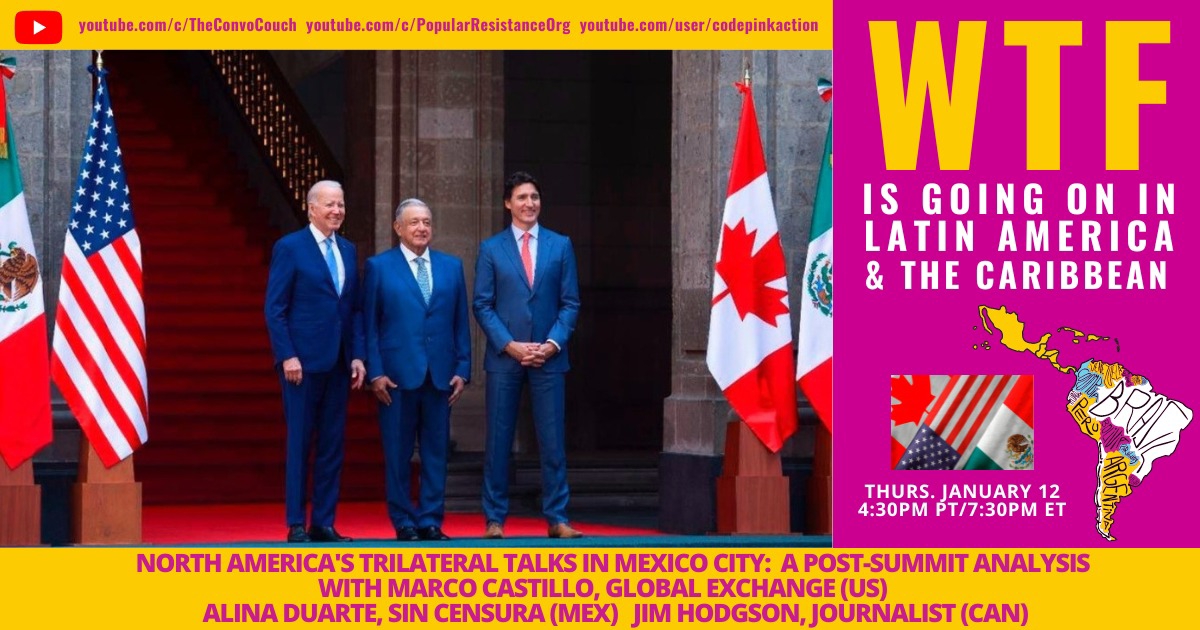 The United States, Mexico and Canada on Tuesday, January 10 vowed to tighten economic ties, producing more goods regionally and boosting semiconductor output, even as integration is hampered by an ongoing dispute over Mexico’s energy policies.

“We’re working to a future to strengthen our cooperation on supply chains and critical minerals so we can continue to accelerate in our efforts to build the technologies of tomorrow – right here in North America,” Biden said in a joint news conference with his fellow leaders after their meeting. 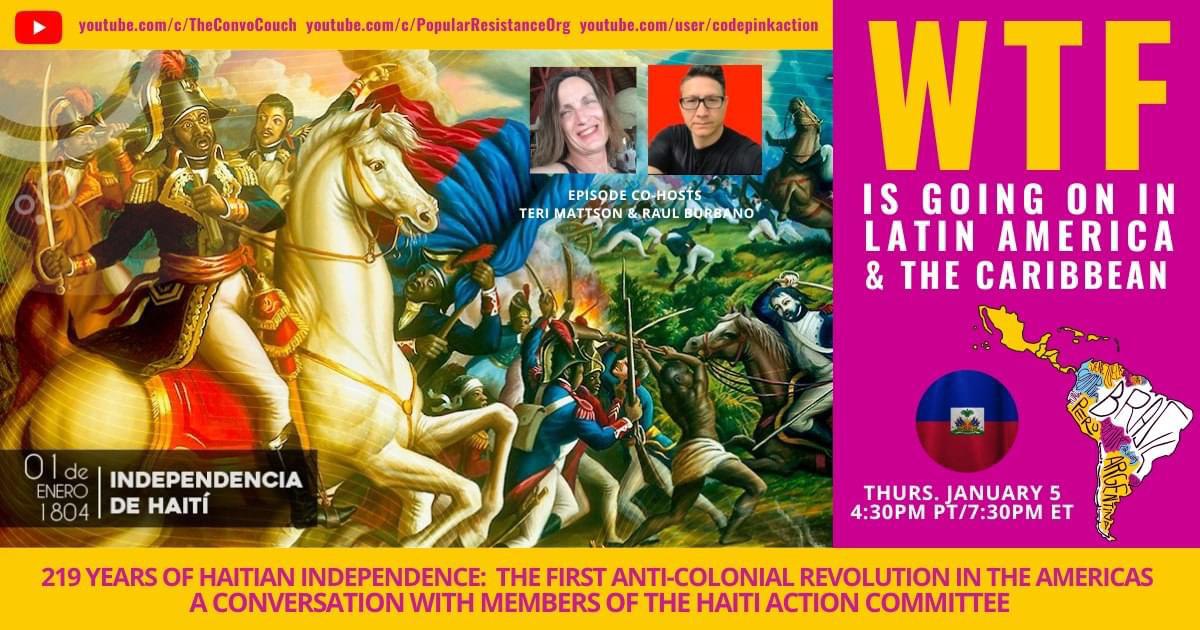 A History Of The First Revolution In The Americas

On January 1, 1804, Haiti became an independent republic, following the revolution which had begun 13 years earlier as a rebellion of enslaved people against slavery and French colonialism.

Previously known as Saint-Domingue, it was the most profitable colony in the world, generating greater revenue than all of the continental North American colonies combined. This immense wealth was generated by the sweat and blood of enslaved Africans who were being worked to death in their tens of thousands on coffee and sugar plantations.

Shortly after the French revolution, which supposedly espoused the ideals of “liberty, equality and fraternity,” on August 22, 1791 enslaved people rose up, demanding those ideals be realized, and slavery and colonialism abolished. 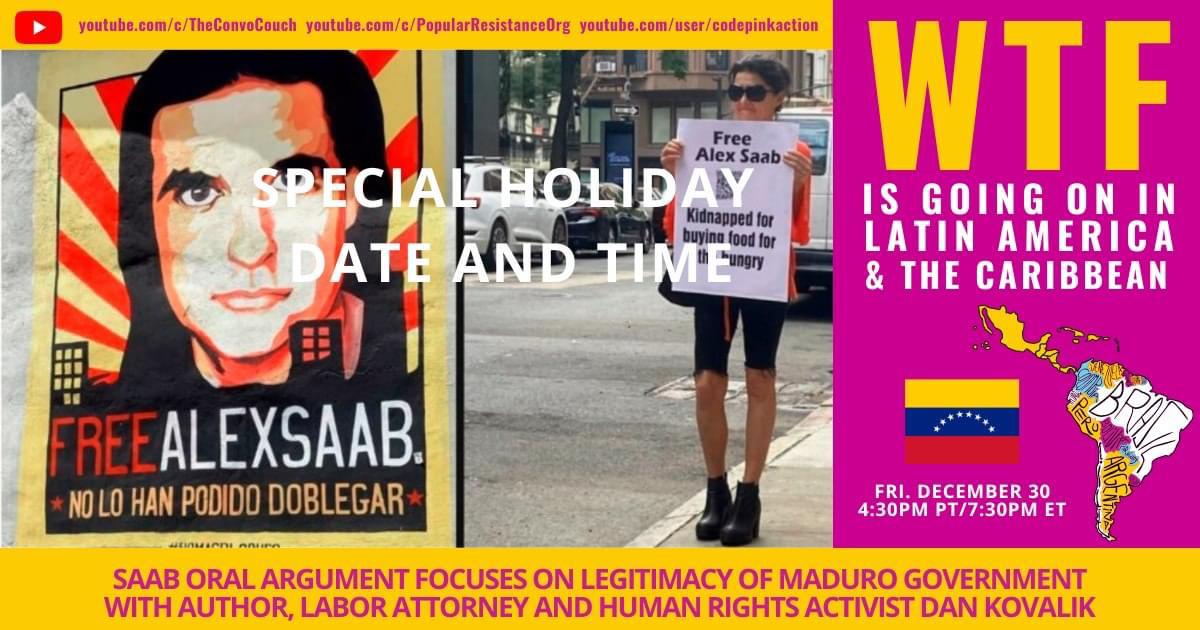 On December 20, in the U.S. District Court of Southern Florida, Judge Robert N. Scola heard oral arguments on Alex Saab’s motion to dismiss the case against him. The factual issue for the Court to decide was “whether Mr. Saab was a special envoy from Venezuela to Iran traveling on a mission when he was detained in Cape Verde and extradited to the U.S. and, therefore, entitled to diplomatic immunity.”  Dan was present for the hearing and will discuss, in detail, the hearing results.  WTF has been following The Case of Alex Saab since his detainment on Cape Verde 12 June 2020. Today is our third update.