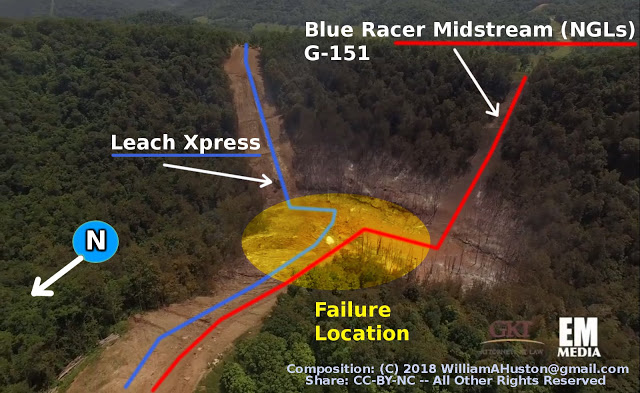 NO NEWS OUTLET is reporting the following facts:

1: In addition to the LXP, which was permitted Jan 2017, and went into service Jan 2018, there is another new pipeline was was recently permitted, the Mountaineer XPress (MXP), with a terminus at Nixon Ridge to the LXP.  I believe the MXP is now under construction.

2: The failure of the LXP occurred mere feet from the Blue Racer Midstream Natural Gas Liquids (NGL) pipeline, in the same pipeline Right of Way (ROW).

3: Also, from the published drone shots, it looks like there may have been construction activity in the area?

What has frustrated me, is that there is no one single data source to examine. These pipelines are so new (LXP, MXP), they are not yet in NPMS. So I had to assemble these maps painstakingly from various sources: a) NPMS, b) Google Earth, c) the EIS of the LXP/MXP pipelines, and d) published photographs.

I am beginning to measure the impact radius, but the failure occurred in a valley, so the blast was constrained on two sides by mountains. So while this may not set any records, it was a BIG fire.

UPDATE 6/13/2018: I realize there is an ambiguity in the definition of Potential Impact Radius, as defined by 49 CFR 192.903: Does one measure the radius as a flat 2D projection, viewed from above? Or does one follow the contours of the Earth? It turns out the measurements by each method are very different in a location with a topology like Nixon Ridge/Big Tribble Creek (steep slopes in 2 directions away from the point-of-failure).

I have a suspicion this was was “wet gas” (methane mixed with NGLs), but this is just a hunch.

From what I see,

HELP! I CANNOT FIND THE Maximum Allowable Operating Pressure (MAOP) anywhere in the FEIS!! Man, how irresponsible can you get!!!

UPDATE 6/13: Carolyn Elefant, an attorney who works with communities fighting pipelines, and a former staff atty at FERC wrote to me, “the MAOP would be in the Exhibit G flow diagrams which are typically CEII information. Possibly also in some of the initial resource reports.” Yes, I know I’ve seen it sometimes in the description of the project. I think FERC should REQUIRE the MAOP to be made public IN ALL CASES.

If you happen to know the MAOP of the Leach XPress, and can cite an official source,  please send it to: WilliamAHuston@gmail.com

UPDATE Tuesday June 12, 9am: I’ve got one unconfirmed report the MAOP is 1440 psi, which is typical. So assuming this is correct, I ran the numbers through my improved PIR formula: http://TinyURL.com/BHBetterPIRFor 1440 psi and a 36″ pipe, the PIR from the federal formula is 943 ft. Since this is *Potential* Impact Radius, the actual value should never exceed this (but always does from my research). 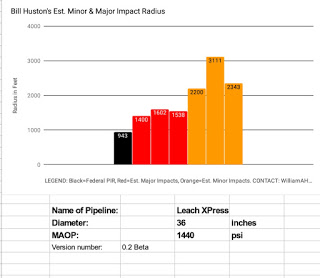 According to my initial measurement (Google Maps/Earth), the Major Impact Radius (scorched trees) is ~1,200 ft.  Notice this is above the federal PIR (bad!) yet under mine (good!).

(1,200 ft. is based on Google Earth, which by default follows terrain. I now realize that PIR is ambiguous. Do you A) measure the radius by following the ground/terrain? Or B) do you assume a flat projection, as viewed from directly overhead? It turns out the length A > B.)

Note that there were likely minor impacts far beyond this, up to 3111 ft away according to my formula, but being a remote area it would be impossible to know. (I usually use warped or melted home siding as an indicator here. ) Also the unique terrain (occurred at the bottom of a steep valley) may have constrained the impacts.

This is one of the first accidents which I’ve got data for after I built my model. (I had to do some tweaks after Salem, because there was good quality data, and it was very bad… Minor impacts out to 2,200 ft!

But this one helps to confirm my model is a good one, at least up to 36″in pipelines.

Check back for updates… 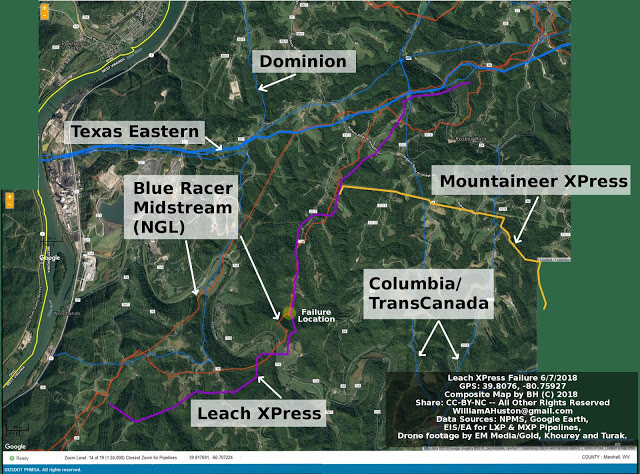