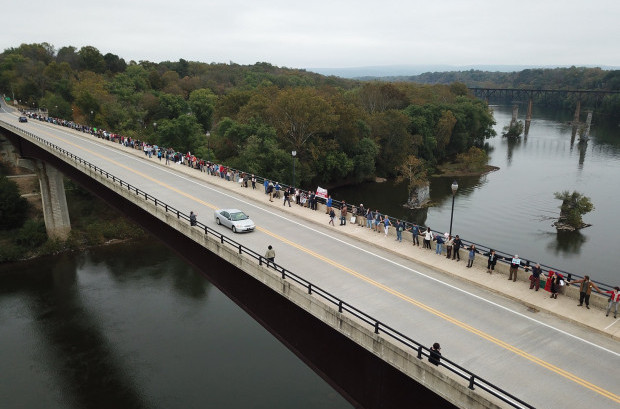 Google is blocking our site. Please use the social media sharing buttons (upper left) to share this on your social media and help us breakthrough

SHARPSBURG, MD- On Saturday, October 14, hundreds of concerned West Virginia and Maryland residents joined hands over a key Potomac River bridge to send a powerful message urging Governor Hogan stop TransCanada from building a fracked-gas pipeline underneath the treasured river. Click here for a photo album on Flickr and here for videos on Twitter.

The group of elected leaders, environmental and social justice advocates, landowners and concerned citizens stood hand-in hand to span the James Rumsey Bridge over the Potomac River in Western Maryland. By connecting the Maryland side of the river to West Virginia, the group showed that they stand as a united front in protesting this pipeline.

Patricia Kesecker, West Virginia landowner who is currently being sued by Mountaineer Gas, said: “when you have put your blood, sweat and tears into the land for almost 50 years and someone can come and take it against your wishes, that is heartbreaking.  When the judge granted Mountaineer Gas the right to our property, she not only robbed us, but she also robbed our children, grandchildren and great-grandchildren of their heritage.”

The pipeline is being proposed by TransCanada, the company infamous for pushing the Keystone XL Pipeline, and Mountaineer Gas. It would ship fracked gas from Pennsylvania to West Virginia, passing through the town of Hancock, Maryland and underneath the Potomac River. This pipeline would not benefit Marylanders in any way, yet it would pose a grave threat to their drinking water and deepen dependence on dirty fossil fuels for years to come.

Brooke Harper, Maryland & DC Policy Director at the Chesapeake Climate Action Network, said: “This is my home. I’ve worked relentlessly for years to protect my community from the dangers of fracking. Now, TransCanada wants to threaten us yet again with this fracked-gas pipeline, which would increase our dependence on fossil fuels and endanger our water. Governor Hogan needs to say no.”

Over the past few months, a growing coalition of legislators, environmental activists. and concerned landowners has been speaking out against the pipeline. From paddling against the pipeline, to a months-long encampment in the spirit of Standing Rock, the coalition has built a massive movement and drawn national attention to the harms that this project could cause.

Mary Mattlage, spokesperson for Eastern Panhandle Protectors, said: “In the light of the recent and unprecedented storms, wildfires, and other natural disasters affecting our planet, we should not be supporting projects such as the Eastern Panhandle Expansion and Potomac pipeline which we know will contribute to greenhouse gas emissions and threaten the water supply for millions of people.”

Josh Tulkin, Director of the Sierra Club Maryland Chapter, said: “Maryland understood that fracking posed a threat to our air, water, and the natural spaces that we hold dear. This proposed pipeline poses the same threat.” said Josh Tulkin, Director of the Maryland Sierra Club. If Governor Hogan is serious about protecting environmental and human health from the dangers of fracking, he will complete the fracking ban by rejecting this pipeline.”

Brent Walls, Upper Potomac Riverkeeper, said: “All pipeline projects have an inherent risk to water quality, but the Potomac Pipeline will cross streams and go through several miles of sensitive karst geology; which magnifies the risks of contaminating the Potomac River and the source of drinking water for millions of people.”