Above photo: A piece of the gas pipeline extracted by the Yaquis of Loma de Bacum. By Yael Martinez/Bloomberg

A chunk of Sempra Energy’s natural gas pipeline sits in the dirt behind a community center in the village of Loma de Bacum in northwest Mexico. Guadalupe Flores thinks it would make a great barbecue pit. 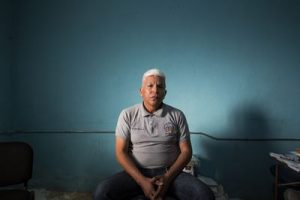 “Cut it here, lift the top,’’ he says, pointing to the 30-inch diameter steel tube. “Perfect for a cook-out.’’

It would be an expensive meal. The pipeline cost $400 million, part of a network that’s supposed to carry gas from Arizona more than 500 miles to Mexico’s Pacific coast. It hasn’t done that since August, when members of the indigenous Yaqui tribe – enraged by what they viewed as an unauthorized trespass their land – used a backhoe truck to puncture and extract a 25-foot segment. They left the main chunk about a mile from the community center, perpendicular to the rest of the pipeline, like a lower-case t.

The impact extends far beyond Loma de Bacum and its 4,500 residents. Arizona’s gas exports to Mexico have plunged 37 percent since the shutdown, hitting an eight-month low in December. Mexico’s state utility is having to burn fuel oil instead to generate power, raising costs.

It’s not an isolated case. Mexico’s opening of its energy industry has succeeded in attracting capital, but it’s also been beset by territorial or environmental disputes, often involving the country’s myriad indigenous groups. When protest turns into sabotage, there’s a risk that investors will be put off from future phases, like an extensive shale development. It’s also grist to the mill of the leftist frontrunner for next year’s presidential election, who’s vowing to reverse some of the reforms.

The Yaquis of Loma de Bacum say they were asked by community authorities in 2015 if they wanted a 9-mile tract of the pipeline running through their farmland — and said no. Construction went ahead anyway.

The Energy Ministry acknowledged that account is true, in a statement that highlights the difficulties its officials confront. Consultation of the eight Yaqui communities along the route was carried out, as required by law. Seven of them gave a green light, the ministry said by e-mail, “while the town of Loma de Bacum refused consent.’’

The project is now in a legal limbo. Ienova, the Sempra unit that operates the pipeline, is awaiting a judicial ruling that could allow them to go in and repair it — or require a costlier re-route. “If they want to build a pipeline, that’s fine,’’ said Flores, the would-be barbecue designer who’s a local community leader. “But it won’t pass through here.’’

At the Energy Ministry in Mexico City, that’s becoming a familiar refrain.

As many as four pipelines have been stalled or temporarily suspended — and that’s just the tip of the iceberg, according to Jesus Reyes Heroles, a former energy minister. “I can’t quote the number but it’s more than that,” Heroles said in an interview. He said the stalled projects go beyond pipelines; in some cases, opposition comes from ranchers who are “abusing the situation to make some money off of it.”

Still, it’s indigenous peoples who’ve been at the forefront of resistance. In June, their protests in Chiapas state led the ministry to scrap an auction of two onshore blocks for oil exploration. In neighboring Oaxaca, communities have stalled development of wind energy projects, claiming a lack of consultation.

Mexico recognizes about 70 indigenous groups, numbering more than 12 million people. The task of consulting those communities falls to the ministry’s Social Impact Evaluation team – which has just six members.

Its mandate, which includes ensuring that there’s no damage to water supplies or other natural resources, is a key element of the energy reforms, says Aldo Flores, the deputy minister. 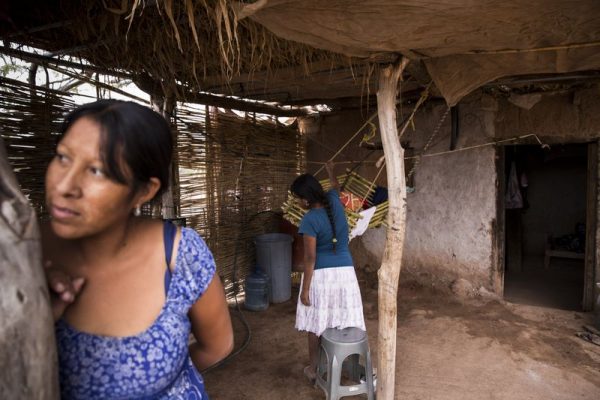 Inhabitants of the Yaqui community stand at a home in Loma de Bacum. Photographer: Yael Martinez/Bloomberg

“Could the Energy Ministry become even more efficient in the procedure of consultation? Yes, it could,’’ Flores said in a Dec. 8 interview. “It’s part of our homework to improve.’’ The ministry says it’s contemplating a significant expansion of the team early next year.

That would be in time for Mexico’s planned shale offensive. It’s promising to lease swaths of land for development, much of it in states like San Luis Potosi and Veracruz that numerous indigenous groups call home. Shale accounts for “more than the half of the new oil potential in Mexico,’’ and the Burgos Basin alone may hold 50 percent more reserves than Texas’s famed Eagle Ford, Flores said.

It’s politically sensitive too. Leftist Andres Manuel Lopez Obrador has vowed to revise energy and oil contracts if he’s elected in July. That could put deals signed by oil majors from Exxon Mobil Corp to BP Plc at risk. Amlo, as he’s known, is ahead in early polls, but most analysts expect a tight three-way race. Indigenous votes could be vital. 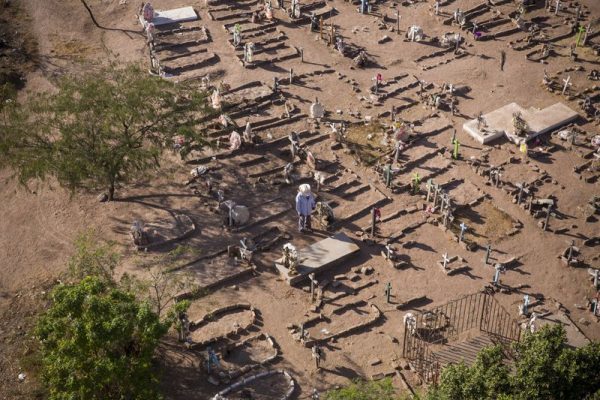 Like many such groups, the Yaquis have a history of fighting to defend their land from intruders, starting with Spanish colonialists in the 1500s. In the last 200 years, the tribe has frequently clashed with the Mexican government, suffering massacres and losing land. “Little by little, their territory has been taken away,’’ says Rodrigo Gonzalez-Enriquez, a professor at the Technical Institute of Sonora and consultant for the Loma de Bacum community.

The Yaqui language predominates in homes, though local schools teach only in Spanish after kindergarten. The tribe is famous for its deer-dance ritual. Throughout southern Sonora, you can find statues of the Yaqui dancer — shirtless, holding gourd rattles, with an antlered deer perched on his head.

The pipeline has caused tensions within the tribe. Last year, there was a clash at the community center, leaving one person killed and several injured. Townspeople say it was an attempt by neighbors to get rid of local leaders who resisted the pipeline. 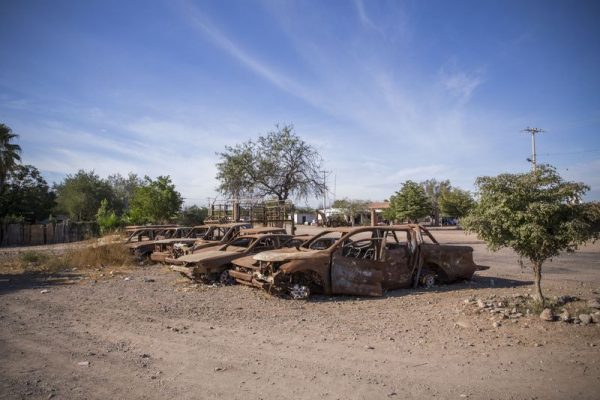 Just off the central plaza, there’s a row of 12 charred vehicles. “The cars are witnesses to what happened here,’’ said Juan Antonio Maldonado, an 81 year-old resident.

He had a message that could have been meant for other Yaqui towns – or for the energy companies. “We are a peaceful community and we don’t like intruders,’’ Maldonado said. “Don’t come here anymore. Please leave.’’