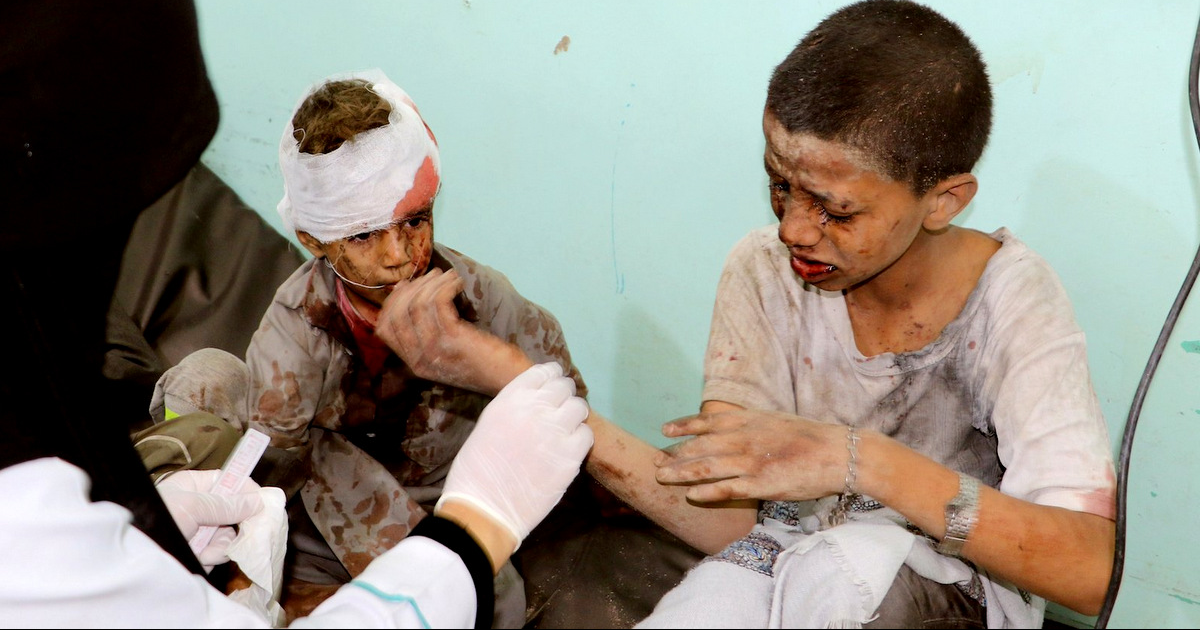 Yemen: A Week Of Deadly Airstrikes And Civilian Deaths

The bombing of the school bus, the Saleh bedouin camp, as well as a family farm were among the dozens of massive Saudi attacks targeting Yemeni civilians this week.

Saada Province, Yemen – The late morning sun conspired with a cloudless blue sky to picturesquely frame the city of Dhahian in southern Saada province. Suddenly the serenity was broken by the loud piercing shriek of fighter jets over the quiet village, followed by a deafening explosion. When the thick black smoke finally began to dissipate, more than 20 mothers discovered a school bus carrying their children had been transformed into a hellish scene: choking dust, smoldering shops, and the charred corpses of children buried under the mangled school bus. Anguished moans and screams of grief and pain filled the air.

At a bed in the Jomhouri Hospital in Saada, four-year-old Mohammed was receiving first aid when he came to the realization that he was still alive but that more than 35 of his classmates, older and younger, lay dead in beds near him as if they were asleep. Others were lying in torn, blood-stained clothing along with school bags, fighting death in the same room.

Mohammed was one of the 80 civilians wounded on Thursday in fresh U.S.-Saudi strikes that targeted a school bus carrying children to summer camp on Dhahian’s outskirts in Yemen’s northwestern province of Saada.

It was 8:30 a.m. when the explosion shattered the day. “What did these children do to deserve this?” a 32-year-old witness to the strike asked. Abdul-Ghani Nayeb, the head of the Health Department in Saada told MintPress more than 50 were killed and over 80 others were wounded as a result of the strike. Some were shoppers and passers-by, but most were children.

The owner of a nearby restaurant, Zaid Hussein Deib, cried out, “they were not Iranian experts,” as he scrambled past overturned plastic white tables and splintered blue tiles. “They were children; they were not carrying ballistic missiles.” Deib lost two sons in the attack.

WARNING GRAPHIC VIDEO | Video shows the aftermath of the airstrike

The death toll is expected to rise, as many victims of the strike remain in critical condition and hospitals struggle to cope with a lack of medical supplies as a result of a Saudi coalition-imposed siege that began in 2015.The U.S.-backed, Saudi-led coalition’s blockade of Yemen has prevented medicine and other critical commodities from reaching around 8.4 million people. Al-Jomhouri hospital, already crowded with a number of wounded from previous airstrikes, has launched an urgent appeal for Yemeni citizens to donate blood.

The International Committee of the Red Cross (ICRC) said in a statement that the school bus was indeed carrying children. Johannes Bruwer, head of the delegation for the ICRC in Yemen, said in a tweet that most of the victims were under the age of 10.

Scores killed, even more injured, most under the age of ten. @ICRC_ye sending additional supplies to hospitals to cope with the influx. https://t.co/BBKoiO6bbS

The Saudi-led coalition issued a statement released by the Saudi Press Agency (SPA) claiming the fatal airstrikes were aimed at missile launchers used by Yemeni forces to target the Jizan industrial city in southern Saudi Arabia, adding, “the strikes conformed to international and humanitarian laws.” Mohammed AbdulSalam, official spokesman for Ansar Allah, described these claims as “the summit of absurdity and moral failure.”

A funeral procession was also targeted by coalition airstrikes Thursday. Five civilians were killed when three airstrikes hit the procession in Fala, in the Majz district of southern Saada. Saudi fighter jets also struck the Zabid District in Yemen’s western province of Hodeida, killing two civilians and injuring a child.

A week of airstrikes and civilian deaths

Yesterday, at least 18 civilians, mostly women and children, were killed and dozens wounded, when Saudi airstrikes bombed two civilian targets in the village of al Amasiha in Amran, northwestern Yemen, as the Saudi-led coalition pressed ahead with its bombing campaign, which often targets civilians in the country.

First, Saudi airstrikes targeted camps belonging to the Saleh bedouin tribe, killing members of seven different families. The nomadic tribe reached the area three months ago in search of livestock pasture and water. Saudi warplanes returned to the camp at sunset at targeted rescuers who were still struggling to retrieve bodies from the rubble. Five rescuers were killed in the second round of strikes.

“So far we’ve recovered three children, as well as two women,” a local resident assisting in the rescue efforts said. That rescuer would later be killed in the second round of the double-tap airstrikes.

Saudi fighter jets also conducted airstrikes on a farm in the al-Jar area, in the Abs district in northwestern Yemen, killing six civilians. The victims were all members of the same family; four women and an infant girl were among the deceased.

The bombing of the school bus, the Saleh bedouin camp, as well as a family farm were among the dozens of massive attacks targeting civilians this week. Last Thursday, the coalition bombed a fish market in Hodeida, western Yemen, killing dozens of fishermen and wounding others who were later transferred to al-Thawrah hospital, which would be targeted by coalition bombs a short time later. So far, 60 people are believed to have been killed in the two attacks and 130 were wounded, including three women and children.

Although the coalition has not commented on the bombing yet, it is expected to evade responsibility for the attack, likely by accusing the Houthis of being behind the attacks without providing any evidence to back its claims.

In fact, the U.S.-backed, Saudi-led coalition has disavowed attacks in Yemen many times before. The coalition initially denied its role in the attack on a funeral at a community hall in the Yemeni capital of Sana’a on October 8, 2016 that killed over 140 civilians. It later admitted targeting the funeral, claiming that an unnamed party had provided false intelligence.

The coalition has launched over 230,000 airstrikes — according a new statistics from the Legal Center for Rights and development, an organization that tracks Saudi-coalition violations of international law — killing civilians and targeting hospitals, schools, markets, and camps for the internally displaced. Yemen’s military has responded by firing salvos of missiles at military and economic targets inside Saudi Arabia, including on the Saudi capital of Riyadh.

Over 600,000 civilians have been killed or injured in Yemen since the Saudi-coalition began its attacks in 2015, according to Yemen’s Ministry of Human Rights based in Sana’a. The U.S.-backed Saudi-led coalition’s blockade on Yemen has also triggered an epidemic of disease and famine across the country.

Ahmed AbdulKareem is a Yemeni journalist. He covers the war in Yemen for MintPress News as well as local Yemeni media.