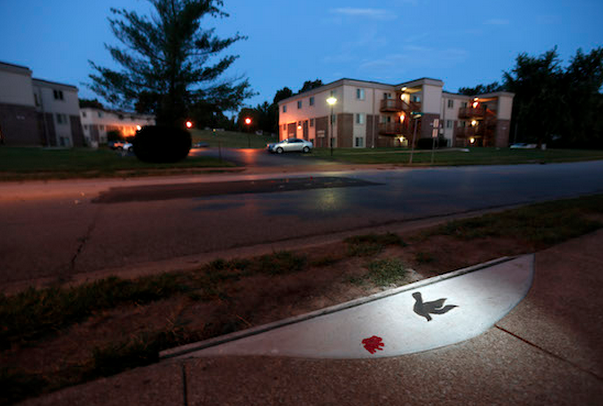 A marker in the shape of a dove is embedded in the sidewalk near the spot where Michael Brown was shot and killed by police Officer Darren Wilson in Ferguson, Mo.  (Jeff Roberson / AP)

A manhunt is underway for suspects in the shooting death of a police officer in Chicago.Lt. Charles Joseph Gliniewicz was found shot after chasing three suspects: two white men and one black man.

The news comes just days after a Houston officer named Darren Goforth was killed, apparently in an execution-style shooting. A black man named Shannon Miles has been arrested and charged with capital murder.

Referring to Goforth’s death, Harris County Sheriff Ron Hickman wildly speculated that the officer had been killed because of his uniform and blamed the Black Lives Matter movement for his death, saying, “We’ve heard black lives matter; all lives matter. Well, cops’ lives matter too. At any point where the rhetoric ramps up to the point where calculated, cold-blooded assassination of police officers happen(s), this rhetoric has gotten out of control.”

The last time the nation was shocked at the killings of police officers was in December 2014, when New York Police Department Officers Wenjian Liu and Rafael Ramos were killed, allegedly by an African-American man named Ismaaiyl Brinsley, who then fatally shot himself. Police union spokesman Patrick Lynch’s reaction was similar to Hickman’s. He said, “There’s blood on many hands tonight. Those that incited violence on the streets under the guise of protest that tried to tear down what NYPD officers did every day. We tried to warn it must not go on, it cannot be tolerated.”

But actions speak louder than words, and police have made clear just how fast they can turn any encounter into a deadly one, whether it is shooting an unarmed man in the back while he is trying to run away, as in the case of Walter Scott in South Carolina, or the gunning down of a 12-year-old child named Tamir Rice in Cleveland, who was shot “withintwo seconds of the police arriving.”

Statistics provide even more clarity. The National Law Enforcement Officers Memorial Fund, which collects meticulous data on law enforcement fatalities, found a mere 3 percent increase in the number of police officers killed this year compared with the same time last year. That increase is well within the statistical noise, and in fact, overall police deaths are gradually decreasing, with 64 officers losing their lives in the course of their jobs in 2015 compared with 62 in the first half of 2014. The leading cause of police deaths was not violent encounters, but traffic accidents.

Data released earlier this year by the Bureau of Labor Statistics found that 13 other jobs in the U.S. are far deadlier than being a police officer. Fishers and loggers are most likely to die on the job. Even when examining death by violent means, taxi drivers have jobs that are more dangerous than those of police officers.

So much for people killing police. What about police killing people? The Guardian newspaper has been keeping careful tabs on officer-involved deaths in the U.S. and found that this year alone, police have killed 779 people. While the numbers of people killed per month were initially decreasing this year, July 2015 ended up being the deadliest month of the year, with 118 people gunned down by police.

And annually, the rate of killings by police is rising, a trend opposite to that of officers dying on the job. In late 2014, the FBI reported a 20-year high in police killings of felony suspects.

So why is the Harris County Sheriff in Texas convinced that “out of control” rhetoric by Black Lives Matter led to the killing of an officer? If anything, “out of control” cops unleash their violence every day on a largely unarmed population. Hickman’s assessment that cops are the victims in a world where they are far better armed and trained to subdue, arrest or kill us, sounds absurd. But it stems from a serious superiority complex that is rife among police officers: that their lives are actually worth far more than ours.