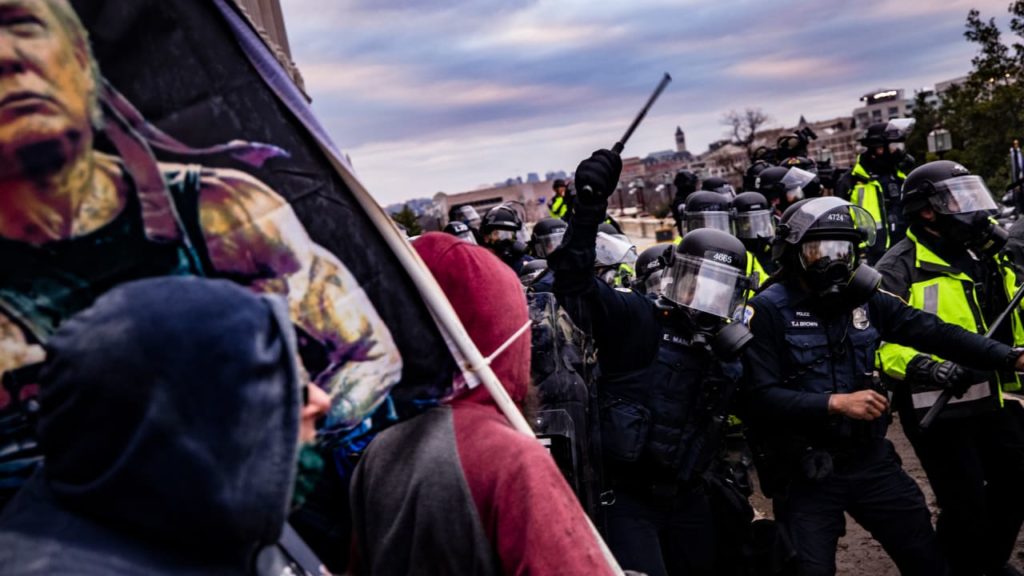 You Can’t Fight Fascism By Expanding The Police State

Above photo: Police officers attempt to push back a pro-Trump mob trying to storm the U.S. Capitol following a rally with President Donald Trump on January 6, 2021 in Washington, D.C.  Samuel Corum/Getty Images.

We won’t reverse the damage done by Trumpism—like the attack on the Capitol—by doubling down on authoritarian policies like surveillance, policing, and censorship.

We need to address systemic injustice at its root.

Democracy is in crisis. Donald Trump and his enablers have intentionally emboldened violent white supremacists for the explicit purpose of attempting to overturn an election. The storming of the Capitol Building, organized publicly and advertised for weeks, is just the latest deadly result of politicians weaponizing a deep current of racism that has coursed through this country’s veins since its genocidal inception. This is part of who we are as a nation, whether we want to admit it or not.

In the coming days and weeks we are likely to see pundits and lawmakers call for things like passing a new domestic terrorism law, expanding mass surveillance programs, increasing funding for the FBI and law enforcement, installing backdoors in encrypted messaging apps, and arming police with more technology like facial recognition and social media monitoring software. We’re also likely to see renewed attempts by the government to curtail freedom of expression, including misguided attacks on Section 230 of the Communications Decency Act.

This is the exact opposite of what we need to be doing. Expanding the U.S. government’s already bloated surveillance state will only bring more terror and harm to the same communities that Trump targeted with his racist policies and rhetoric. More money, weapons, and technology in the hands of the Department of Homeland Security—an agency complicit in human rights abuses long before Trump took office—won’t stop the rising threat of right-wing violence. Instead it will be used to suppress legitimate dissent, and disproportionately target Black and brown activists, Muslims, immigrant communities, and social movements that effectively challenge systemic injustice and corporate power.

President-elect Joe Biden has already expressed that he supports the creation of new domestic terrorism statute. Experts warn that a new law isn’t needed—acts of terrorism are already illegal. Creating a new designation would fail to prevent right wing attacks while threatening marginalized communities with increased surveillance, prosecution, and harassment for engaging in First Amendment protected activities. In the last few years, top Democrats and Republicans have called for billions of dollars in additional funding for the FBI, and have scuttled attempts to rein in the phone and internet spying programs enabled by the USA Patriot Act, which was rushed through Congress faster than lawmakers could read it in the immediate wake of 9/11.

These mass government surveillance programs, ushered in during a moment of national crisis, were billed as a temporary measure necessary to ensure public safety—and we need to ensure that lawmakers don’t repeat these same mistakes now. Two decades later, there is almost no evidence to suggest that they have ever actually saved a single human life, but bulk collection and monitoring has had a documented chilling effect on freedom of expression. The FBI has gone even further in recent years, creating a specific “Black Identity Extremist” designation used to target Black activists, and the failed “Countering Violent Extremism” program that primarily infiltrated Muslim and immigrant communities.

The full force of the U.S. government’s surveillance state was brought to bear this summer as uprisings sparked by centuries of systemic racism and police violence swept the country. Police used “stingray” devices to intercept organizers’ calls and texts, while the military and border patrol deployed drones and planes to monitor protestors from the sky. Federal agents snatched people into unmarked vans. Police deployed teargas, concussion grenades, rubber bullets, and worse. Law enforcement officers even rammed protesters with their vehicles.

Little of these militarized tactics and equipment appeared in the roughly three hours it took to clear the Capitol building this week—even though the FBI has known for years that right-wing, white nationalist violence was a significant threat. It was clear from organizing efforts online that a crowd of Trump supporters, neo-nazis, and Qanon believers were headed toward the Capitol earlier this week. But Capitol Police failed to stop these acts of white supremacist violence not because they were unprepared. It’s because law enforcement as an institution in the United States exists primarily to uphold the social, economic, and racial power structure. They’re on the same side.

The storming of the Capitol was organized in plain sight. It was egged on by the sitting U.S. president and several members of Congress. No amount of additional surveillance could have prevented it. It was not lack of intel that led to this massive security breach—it was a systemic cultural and political unwillingness to take the threat of white supremacist violence seriously. Law enforcement claim again and again they need encryption backdoors to prevent attacks. Meanwhile these attackers were livestreaming and posting selfies as they went.

With five people dead and many more wounded inside the halls of Congress, social media platforms including Facebook, Instagram, and Twitter announced they would suspend Donald Trump’s accounts. Many feel this was a necessary step—that Trump’s posts had approached the “fire in a crowded theater” line. Many feel like it’s too little too late, and focusing only on high profile accounts misses the point.

We can and should have robust debates about the content moderation practices—and failures—of Big Tech companies. And we should hold them accountable for the ways their surveillance capitalist business models are doing harm. We desperately need omnibus privacy legislation that stops companies like Facebook from harvesting people’s data and using it to micro-target hate and lies directly into the minds of people most susceptible to them. At this point it’s clear that an immediate industry-wide moratorium on artificial algorithmic amplification—that machine that supercharges far-right recruitment and disinformation online—would be more than appropriate.

But one pitfall lawmakers should avoid is any attempt to impose government-mandated speech restrictions on social media platforms. More specifically, lawmakers should reject attempts to exploit the crisis Trump created to further one of Trump’s top goals: gutting Section 230, a foundational law that makes it possible for websites to host the content, posts, videos, photos, memes, and opinions of ordinary people.

Some Democrats have already taken aim at 230, incorrectly believing that creating carve outs in the law would incentivize web platforms to do a better job at moderating dangerous content and misinformation. In fact, Section 230 is what’s making it possible for these private companies to suspend Trump’s account for speech that, while clearly dangerous, may not technically be illegal. And rushed changes to 230 would almost certainly do more harm than good. The last major change to the law, SESTA/FOSTA, has been widely regarded as a disaster that triggered widespread internet censorship and put sex workers lives in danger.

Section 230 is one of the most important laws protecting human rights and free speech in the digital age. Messing with it would only solidify the monopoly power of the largest tech companies, and it might actually make it harder for them to prevent abuse on their platforms. If it were repealed entirely, it would lead to mass suppression of anti-racist and anti-fascist social movements, which are clearly needed now more than ever. It would make it harder, not easier, to combat the corrosive ideologies that propped up Trump and defined his agenda.

In a split screen moment, as Trump’s cult following descended on D.C., major news outlets called the Georgia runoff election. Democrats are about to control the House, the Senate, and the White House. They will assume control of the government in the midst of a crushing pandemic, and at a time when millions are on the brink of unemployment, homelessness, and food insecurity.

The new administration and Congress should resist the urge to rush through legislation or enact headline-grabbing policies that claim to respond to right-wing violence while reinforcing the systems that foster and enable it. Instead, they should listen to the communities most harmed by Trump and his supporters’ actions, and enact meaningful structural changes that begin the work of addressing systemic injustices at their root.

We can’t fight fascism with authoritarianism. We can’t combat groups of violent white supremacists with policies based in structural white supremacy. We won’t reverse the damage done by Trumpism by doubling down on Trump’s most tyrannical instincts.

Instead of letting politicians exploit our fear to expand and supercharge oppressive institutions, let’s work together to dismantle them.

Evan Greer is a musician, activist, and writer based in Boston. She’s the Deputy Director of the viral digital rights group Fight for the Future and writes regularly for outlets like The Washington Post, The Guardian, Wired, and BuzzFeed News. Follow her on Twitter @evan_greer.