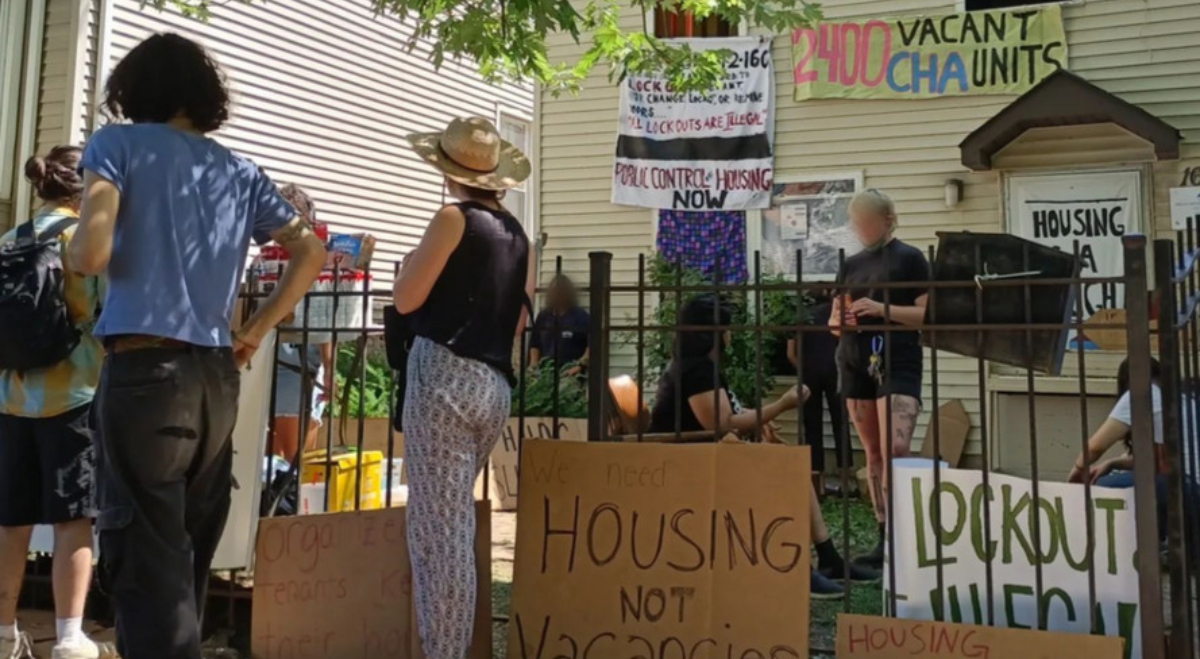 Thousands are on the wait list of public housing in Chicago while thousands of units remain vacant.

The follow report looks at an attempt by one group to reclaim public housing outside the law.

Chicago, Illinois – On Friday morning, August 5th, we threw a party for our neighbors and community outside of a yellow slat-board 4-bedroom on a quiet residential block. An anticipatory buzz was in the air as about 35 people: radicals from homeless encampments, anarchist affinity groups, Maoist pre-party formations, organizations like Chicago Union of the Homeless and the Young Lords, as well as sympathetic neighbors – milled about playing music, painting cardboard signs, fussing over the food distro table, and dropping banners from second-story windows. The occasion? The re-occupation of our home after an illegal lockout the week prior. This celebration was the culmination of a week of agitation against the property management company, scheduled for the very hour they’d announced their intent to change the locks once and for all.

Soon, the news cameras arrived. A representative from the Chicago Union of the Homeless kicked off the informal press conference followed by statements from the select members of our group who had chosen to go public. The DSA-affiliated alderman of our ward briefly materialized to give us his full-throated support in an ABC News interview that ultimately went unaired. Meanwhile, vehicles from the property management company were spotted circling the block before disappearing. We laughed in uneasy victory, knowing they didn’t dare strike while the media was watching.

The reporters left after about an hour and, just as we suspected, it didn’t take long for the property management company to re-emerge — this time flanked by the pigs. First one squad car, then two. The crowd’s light-hearted chatter gave way to sharp focus as we arranged ourselves into human barriers along the front and back gates. Soon there were four squad cars, then a paddy wagon blocking the street. About 13 employees from the property management company stood menacingly across the street, including the manager we’d been agitating all week. A CPD lieutenant pulled up, then a sergeant. We hurriedly made calls to the press and the alderman’s office, asking them to return.

But there was no time to wait for these legitimized actors to create a buffer, because the sergeant-lieutenant duo was already striding purposefully towards the house and demanding to speak with whomever was “in charge.” As they approached, members of the crowd alerted the others with shouts of “cops approaching” and “get your cameras out.” Though one member of our group volunteered to satisfy the pigs’ terms by becoming the nominal “spokesperson,” they never left the physical proximity of the crowd, which allowed a more collective verbal confrontation to occur. Though many of us had never met before, the crowd worked exceptionally well as an adversarial united front. Individuals would chime in with helpful questions and pieces of relevant legal knowledge, which were then amplified by the others. The sergeant tried to warn of a dispersal on the basis of illegally picketing in a residential neighborhood, but through this amplification process the crowd demanded she define “picketing” (which she never addressed) and reminded each other that three dispersal orders are needed before arrests can be made. Eventually, the white shirts retreated while some members of the core group spoke amongst ourselves, and others hurled insults at the group of rank-and-file pigs growing in the street.

As the sergeant began giving the official dispersal orders over a loudspeaker, two occupants locked themselves inside and gave impassioned megaphone speeches through the open windows, eliciting cheers from the crowd. The number of onlookers on surrounding sidewalks and porches increased. A few of our people peeled away as threats of arrest increased, but about a dozen were granted asylum in the next-door neighbor’s front yard, while some chose to flyer the surrounding blocks and talk to sympathetic neighbors, and still others assumed the risk to remain firm in the yard. In a series of frantic negotiations, the pigs promised that they wouldn’t arrest the occupants, but refused to state that they would stand in the way of another illegal eviction attempt by the property management company.

At some point after the second dispersal order, the lieutenant pulled a box of zip-ties out of a squad car, coached a group of 8 officers about their arrest methods, and announced the arrival of a second paddy wagon. It wasn’t until after all this occurred that the sergeant went to confer with the higher-up representative from the property management company and, for the first time, ask what the company’s eviction process was. In an interaction captured on video, she was unable to give an answer.

Just before the third dispersal order was issued, the press returned (though we never heard back from the alderman). It was time for the final leg of the negotiations. The sergeant pig and the property management company’s representative approached. The occupants of the house, who were barricaded inside, refused to leave so the negotiations took place through the first-story window. Only two of us were in the house, separated from our supporters outside. We hoped we could negotiate, but were prepared for arrest. We had our utility bills ready and the house was fully furnished. All we could do was hope that the flimsy protection of the law could ward off its living embodiments.

When resolution finally came, it was almost anticlimactic. The situation was simple: the residents had bills and furniture to prove they were residents, and the manager had no legal case to throw them out. A detenté was negotiated: the management company would have to return with a formal eviction notice, or they wouldn’t return at all. In the end, our hard-won victory in a three-hour standoff against over 20 armed pigs with 10 squad cars and 2 paddy wagons, 13 hostile property management employees plus their private security detail turned out to be…convincing the property management company to go through a normal, legal eviction process.

The manager angrily stormed off, muttering about how she needed to find a new line of work. The last pig on the scene, the watch commander, drove away. Our allies and comrades rendezvoused at the house with whoops of joy at the counter-dispersal, and we celebrated throughout the afternoon.

In late Winter 2021, a small crew of activists, inspired by years of solidarity between housed and homeless radicals, turned the utilities on at a vacant house in Humboldt Park, Chicago. A few weeks later, they scrubbed mold off the floor, fixed the plumbing, and moved a piano in. Did they own the house? No. Were they renting the house? No. The name on the deed was Chicago Housing Authority (CHA), and the management company that occasionally slipped notices under the door, such as a notice of pest extermination, or a notice that the occupants were “illegitimately” occupying the premises, was Hispanic Housing Development Corporation (HHDC).

We hadn’t picked the house by accident. In Chicago, there are over 2,000 vacant CHA units. The wait-list for both public housing and voucher-based options: 204,863 people. For the type of property we occupied, the waiting list was down to just 44,608 people.

Meanwhile, a new homeless encampment had begun in Humboldt Park, the park around which the neighborhood was organized. The organized robbery and systemic disorder, which the capitalists call inflation, was making surviving, let alone thriving, more and more unbearable. And so, over the next six months, we moved into three more neighborhood houses. They’re poorly built houses, made to decay so that CHA can claim them uninhabitable, force people out into the streets, and sell them off to private developers for a profit. The first house we occupied had been empty for over three years before people moved in, and the last residents had had their lives turned upside down when CHA forced them out, too.

Who are these state-sponsored entities, obscured by abstractions like mortgages, legal deeds, and contracts until they’re kicking your door in? In Chicago, public housing is owned by CHA. They’re the breadcrumbs the state gives to the poor, which in Chicago almost always means Black or Latinx. They don’t care about peoples’ well being — this is the same organization that created and destroyed Cabrini Green. Over the last 40 years, buffers have been created between CHA and their property through the creation of management companies, including HHDC, which are used to mediate and organize the management and financialization of CHA houses. These management companies can swap membership and jurisdiction whenever a new scandal emerges. Most recently, HHDC has been the contractor for Humboldt Park — although we’re not sure they’re going to continue to be.

On July 26th, they came to four of our occupied houses, kicking in our windows, sledgehammering our doors, and yelling confidently about the ease with which they evict people from their homes on a daily basis. This lockout was, by the terms of the state, illegal- there was no due process, no court orders, and no sheriff. The re-occupation of August 5th, described above, was our response.

While part of the focus of this event was on the legal status of the lockout, let’s be clear- we expect no justice from the law, the courts, the state. We work not for the paltry dream of a legal eviction preceding, but for the right of all people to reclaim any vacant housing, CHA or otherwise, and build themselves and their neighbors a home. While the CHA claims in their mission statement to “leverage the power of affordable, decent, safe, and stable housing to help communities thrive,” the substance of this claim is jarred by the reality of vacancies, disrepair, money hoarding, and broken promises.

We are a small crew, but we are not alone. We take inspiration from the legacy of occupiers all over the city and world.  The work of housing reclamation is, and for decades has been, happening above and underground.  We take inspiration from houseless friends and organizers who have built community in the vacant spaces left to rot by the city. We take inspiration from the Philly Housing Action crew, from the Chicago Union of the Homeless, from Moms4Housing Oakland, and from those who understand that the occupation of universities, government buildings, and housing anywhere is a statement to the owning class that what they have is not sacred from our grasp.

At the end of the day, CHA, HHDC, or any other leg of the conglomerate, are not exceptionally sinister evils.  They are the mundane evils of policy and procedure that dehumanize people to maintain imperial order and control.  Like the legislators who get to decide who gets access to life saving drugs, or who gets another landfill put in their community, they exercise their high ground of liberal morality in deciding who is worthy of housing and who is not.

Becoming homeless often begins with an act of violence, imposed by a parent, a partner, a landlord, or the state. Being without a house often involves an arbitrary and cruel process of being shunted between the bureaucratic shelters and the unpredictable parks. in Chicago, the easily-reparable homes sitting vacant are a slap in the face. At last count, CHA maintains the keys to 2,400 vacant and inaccessible properties- but you don’t need the keys if you can change the locks.