Hundreds of Jewish people marched Dec. 14 from Freedom Plaza to the new Trump International Hotel on Pennsylvania Avenue in Washington, DC, where they protested a prominent Jewish organization’s decision to hold a Hanukkah party at the hotel owned by the president-elect.

The Conference of Presidents of Major Jewish Organizations co-hosted the Hanukkah party with the embassy of Azerbaijan. “We’re not happy that the Conference of Presidents chose to cozy up to power and be complicit in Trump’s presidency by holding their Hanukkah party in Trump’s hotel,” said Rachel Goldstein, a member of the D.C. chapter of IfNotNow, the group that organized the protest.

Rabbi Sharon Kleinbaum traveled from New York City to the event out of concern with a rise in hate crimes since the election. “He has created an environment in which the Alt-Right — or really we need to call them the white supremacist world of this country — was given a platform, a megaphone and political positions.”

“We stand with the best of values of our people rejecting the anti-Jewish misogyny, racist and Islamaphobic kinds of attitudes that Trump has unleashed in this country,” said Kleinbaum of the Beit Simchat Torah Congregation. “We are seeing the unraveling of our democratic society and the unveiling of — I’m afraid the beginnings of — a fascist one and we have to be alert and fight back.”

IfNotNow, created in 2014 by mostly young Jewish Americans committed to ending the Israeli occupation of Palestinian lands, urged the Conference of Presidents to cancel the party at the Trump hotel and join their fellow Jews outside to demonstrate unity in resisting the incoming president. Last month, about a week after the presidential election, IfNotNow organized a march to Trump’s transition team office in Washington to denounce the hatred and anti-Semitism they believe the president-elect and his close adviser Steve Bannon stirred up during the presidential campaign.

Several of the Conference of Presidents’ member organizations pulled out of the Hanukkah Party, citing reasons ranging from Azerbaijan’s poor human rights record to the fact that the party was being held in a hotel owned by the president-elect, which raised questions about the appearance of trying to curry favor with him.

Azerbaijan is an oil-rich nation on the Caspian Sea that has close ties with Israel and a dismal human rights record. The Azerbaijan embassy’s primary lobbyist in Washington is the Podesta Group, a lobbying firm founded in the late 1980s by brothers John Podesta, the former chairman of Hillary Clinton’s 2016 presidential campaign, and Tony Podesta.

IfNotNow “came out swinging from the start” after Trump’s victory in the election, group member Eliana Fishman said during a rally at Freedom Plaza prior to the march. “It was our pressure, our hard work and our commitment to freedom” that convinced groups like the Anti-Defamation League, the Jewish Federations of North America and the American Jewish Committee to withdraw from the Hanukkah party, she insisted.

Like Kleinbaum, Goldstein said she is trying to do what she can to fight back against the incoming administration. “My biggest fear is seeing white supremacy become so normalized in our politics and knowing that that is going to be what we’re exposed to for the next four years,” she said.

“Seventy-five percent of Jews voted against Donald Trump, and we’re rejecting the rhetoric he spewed in his campaign and what we’re afraid to see in his cabinet picks,” said Sarah Brammer-Shlay, spokesperson for IfNotNow.

IfNowNow opposes a Muslim registry that has been in place since 9/11. “As Jews we’ve seen that before in our history,” she said. “And it’s horrible and atrocious and absolutely disgusting that it’s being talked about by our president-elect.”

In the group’s view, holding the Hanukkah party at Trump Hotel betrayed core values. “We’re seeing that the Council of Presidents is doing this to cozy up to the Trump administration, centering pro-Israel at all costs politics. So we’re here as American Jews to reject that and say we’re building a movement for freedom and dignity for all people,” Brammer-Shlay said. 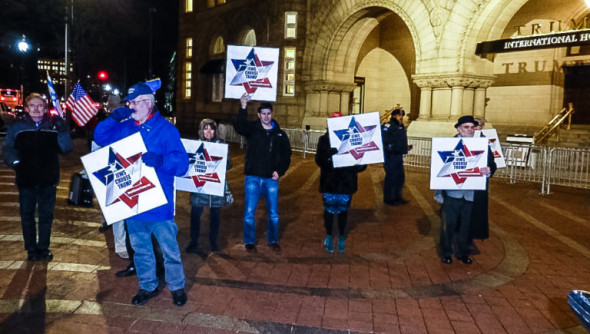 About a dozen pro-Trump Jewish people showed up outside the Trump hotel to show their support for the incoming president, chanting “USA, USA, USA.” They complained about the Republican Jewish Coalition’s lukewarm support for Trump during the presidential campaign. One Jewish supporter of Trump said he showed up in front of the Trump hotel to counter-protest the IfNotNow group’s action. “These people have the audacity to be protesting against a Hanukkah party that just happens to be at this hotel,” the Trump supporter said.

Prior to the march, Fishman accused the Conference of Presidents of ignoring Trump’s “racism and corruption” simply because the establishment Jewish organization believes the incoming administration will “unquestionably support” Israel’s occupation of Palestinian lands.