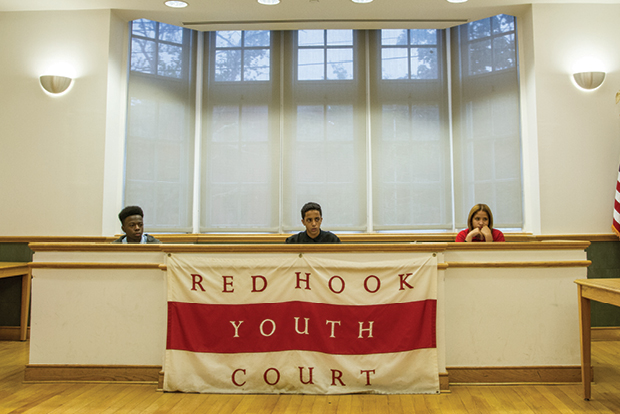 Early in October, a young man named Kellon sat in a heavy wooden chair inside the deliberation room at the Red Hook Community Justice Center. He wore a black polo shirt, had perfect posture, and made direct eye contact. From the hallway, enthusiastic voices leaked into the room and competed with his low baritone.

Asking me was a courtesy. Kellon was already up, decisively shutting out the noise behind him.

“I’m talking about myself,” Kellon clarifies. “I’m the lawyer.”

At 16-years-old, despite what he says, Kellon is not really a lawyer. Rather, he is a junior at the Urban Assembly School for Law and Justice in Downtown Brooklyn. But Kellon is not a liar, either. Every Tuesday and Thursday for the past two years—along with 15 other high school students—Kellon goes to the Red Hook Community Justice Center and serves as a member of its Youth Court.

Red Hook Youth Court is one of five operating Youth Courts in the city; other locations are in Queens, Staten Island, Harlem, Brownsville, and Newark. Youth Courts in New York operate in partnership with Community Justice Centers, like the one in Red Hook. (Many Youth Courts have popped up across the country in the past decade, though the one in Red Hook was both the city’s and one of the country’s first.) The overall directive of Community Justice Centers, which are supported by private and public partnerships, is to provide more effective and humane alternatives to detention, whenever possible. The Justice Center in Red Hook opened in June 2000, though the Youth Court had been established two years before that.

Rather than herding young people into an overcrowded and frequently immoderately punitive system, Youth Court members deliver rehabilitative sanctions to teens for misdemeanors in an effort to nudge them back on track early on, before things have a chance to get really bad. Most often sanctions take the form of community service, apology letters, job training, or anger management classes. Empathetic, early intervention—from peers, rather than authority figures—it’s believed, gives the youth respondents an unprecedented opportunity to be a real life hero in their own Choose Your Own Adventure story. Making a course adjustment at a critical juncture can bring about a dramatically different ending.

On a given evening, Youth Court members will conduct between one to three juried cases of peers who have committed misdemeanors—truancy, fare evasion, possession of marijuana or a low-grade weapon, trespassing, fighting—non-indictable offenses that have been referred to the Youth Court by the New York City Probation Department, Brooklyn Law Department, and local police precincts and schools.

Truancy hearings are most common (“every kid in Sunset Park is late,” Kellon jokes) and on the afternoon I visited, this was also the case. Kellon acted as the youth advocate, or defense lawyer, for the respondent. “If it’s truancy, we need to know why they were truant. The reason behind it. The subtext,” explains Kellon. “Basically, you get to know the person before you judge them.”

A few minutes later, Kellon took his place beside his youth respondent, a 17-year-old girl who had been caught skipping school in March. The bailiff, another youth member, led the courtroom in an oath of secrecy. The community advocate, or prosecutor, asked the jury to consider the harm done to the community and to the respondent herself by her actions. Kellon made his opening statement. “Please remember that a mistake does not define a person,” he says. The bailiff led the girl to the witness stand and asks if she promises to tell the truth. “Yeah,” says the girl. It was furtive. “Say, ‘yes,’” the young bailiff requests flatly, in response.

In unison, the 10 Youth Court jury members turned to face their peer. The lead juror opened with a line shared at the start of every hearing, composed by a former member. “We want you to know,” says the 15-year-old juror, “We’re here to help you, not judge you.”