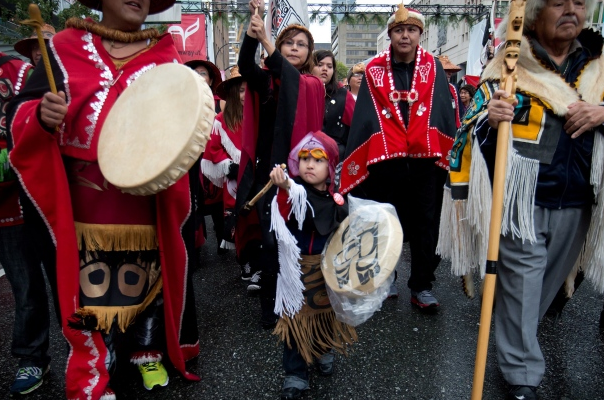 At dawn on January 6, 2015, a group of young Diné (Navajo) women and their supporters gathered at sunrise near the fire department at the base of Dził Na’oodiłii (Huerfano Mountain). From there the group embarked on a 200-mile trek through eastern New Mexico—a tribute to the 150th anniversary of the tragic “Long Walk.”  Throughout this journey they have been raising awareness about the historical and present day challenges faced by Diné people and inspiring hopeful solutions to address these issues.

Idle No More Communications volunteers have been in contact with some of the walkers and will feature images and reflections from their powerful walk in the next grassroots newsletter.  Keep reading to learn more about the beginning of their journey.

Organizers are calling out for community support in the form of walking, hosting or helping to garner basic materials. This first journey will end at Tsoodził (Mount Taylor), their southern sacred mountain. Three more walks are scheduled for spring, summer and fall so that each of their four sacred mountains is visited. The walkers intend to cover more than 1,000 miles in 2015.

The commemorated event occurred in 1864 that Colonel Christopher “Kit” Carson – under the command of General James Carleton – enforced a merciless, scorched earth policy to bring Diné people into submission. During this time nearly 9,000 Diné and 500 Mescalero Apache men, women, children, and elderlies were marched at gunpoint for 300 miles to a small patch of arid land known as Bosque Redondo, New Mexico. Many perished along the way.

During their four-year internment at this reservation “experiment”—known in Diné as Hwééldi or “the place of suffering”—hundreds died due to starvation, illness and physical violence. In 1868, high costs of rations and soldier commissions caused the federal government to disband the experiment and release them back to Diné Tah, the Navajo homeland.

“We are walking to honor the resiliency of our ancestors who 150 years ago were forced to march hundreds of miles in the dead of winter on a genocidal death march,” says Dana Eldridge, one of several female organizers of the walk. “They sacrificed and suffered so much so that we could live within these four sacred mountains. So we’re walking to honor them.”

According to the organizers, the walk is not simply a re-enactment of The Long Walk, but their return to a traditional lifestyle.

“It’s something that people don’t do anymore. We have the convenience of vehicles. But walking an entire journey is something that’s revolutionary in a way,” says young organizer Nick Ashley of Gallup, New Mexico.

“Our ancestors walked so that we could be here on our homeland singing, dancing and praying the songs they did. But now everyone is chasing the American Dream and neglecting our homeland, our language and way of life,” says Kimberly Smith of St. Michaels, Arizona.

Several Diné elders, including Larry W. Emerson, think present day problems might be due to an abandonment of self: “One purpose of the walk might be for us to come back into ourselves via our traditional knowledge—into our homes, families, relations, communities and earth-sky knowing. Ké and k’é hwiindzin—to be conscious of our interdependent relationships based on compassion, love, and nurturing—are vital to our survival and we cannot come home to ourselves without these vital teachings. [We] offered several teachings [to the walkers] that might address the practice of coming home to ourselves, including some prayer songs.”

According to organizers, land-based prayer is an important part of their journey. “Everything we do is a prayer to return to our original selves,” says Laura Red Elk of Pueblo Pintado, New Mexico. “The mountains were our original naat’áanii [leaders] before IRA governments or the tribal council. Since our government is failing to protect us, we are returning to our original leadership by letting the mountains determine how we walk on the land.”

Organizers and their elders have chosen to name their movement as “Nihígaal Bee Iiná” or “Our Journey for Existence.” Due to the widespread presence of uranium, coal and gas extraction throughout Diné Tah, organizers feel that their environmental situation has reached a boiling point.

According to the EPA, nearly 4 million tons of uranium have been extracted from Diné Tah since 1944. With over 500 abandoned uranium mines throughout the region, both homes and water sources are contaminated with high levels of radiation.

Additionally, over 20,000 tons of coal are strip-mined from Diné and Hopi lands every day by Peabody Coal Company alone. This coal feeds Navajo Generating Station, rated by the EPA as the highest emitter of toxic nitrous oxide in the country.

Organizers forecast that the next major threat is the onset of a boom in natural gas extraction through hydraulic fracturing—a process now banned in the state of New York.

Erin Konsmo of the Native Youth Sexual Health Network in Alberta, Canada, says that resource extraction is not only a threat to the environment: “Some of the highest rates of missing and murdered women are in the tar-sands extraction areas. This is related to worker’s camps and the lack of jurisdictional protection for women on tribal lands.” Organizers state that the heavy presence of extractive industries is having a similar effect on Diné women.

“We give life and we nurture life just like the land does. Our traditional leadership structure is matrilineal because we are the spinal chord of society, the first teachers of the children. We are journeying back to our original selves including our responsibility as women to protect the land and take care of it,” says Red Elk.

“It’s all the more reason for this walk to be led by majority women. As traditional caretakers of the land, their physical presence is in and of itself a resistance to resource extraction,” comments Konsmo.

Weekly paychecks for Diné miners and generator operators are a constant reminder of their economic dependence on the fossil fuel industry. Walkers hope to raise awareness about self-sufficiency as an alternative to the extraction economy. They will disperse heirloom corn seeds to communities along the way and speak on the importance of food sovereignty and self-reliance.

“We are being told to invest in our own destruction in the name of the economy,” says Eldridge. “People say we need these jobs, but we don’t. To take care of ourselves it will take a tremendous amount of work, but it is a beautiful dream and it is so possible.”

Organizers are urging others to join them, especially Diné people, for all or part of the walk.

Smith encapsulates the spirit of the walk by saying, “We have to go back to where the wisdom is embedded. We have to reintroduce ourselves to those places. It is our inherent right and responsibility. The uplifting that our people need is there. We want to bring it back for our people, we want to honor our elders, our children and most importantly, we want to honor the earth.”

For more information on “Our Journey for Existence,” contact nihigaalbeeiina@gmail.com.