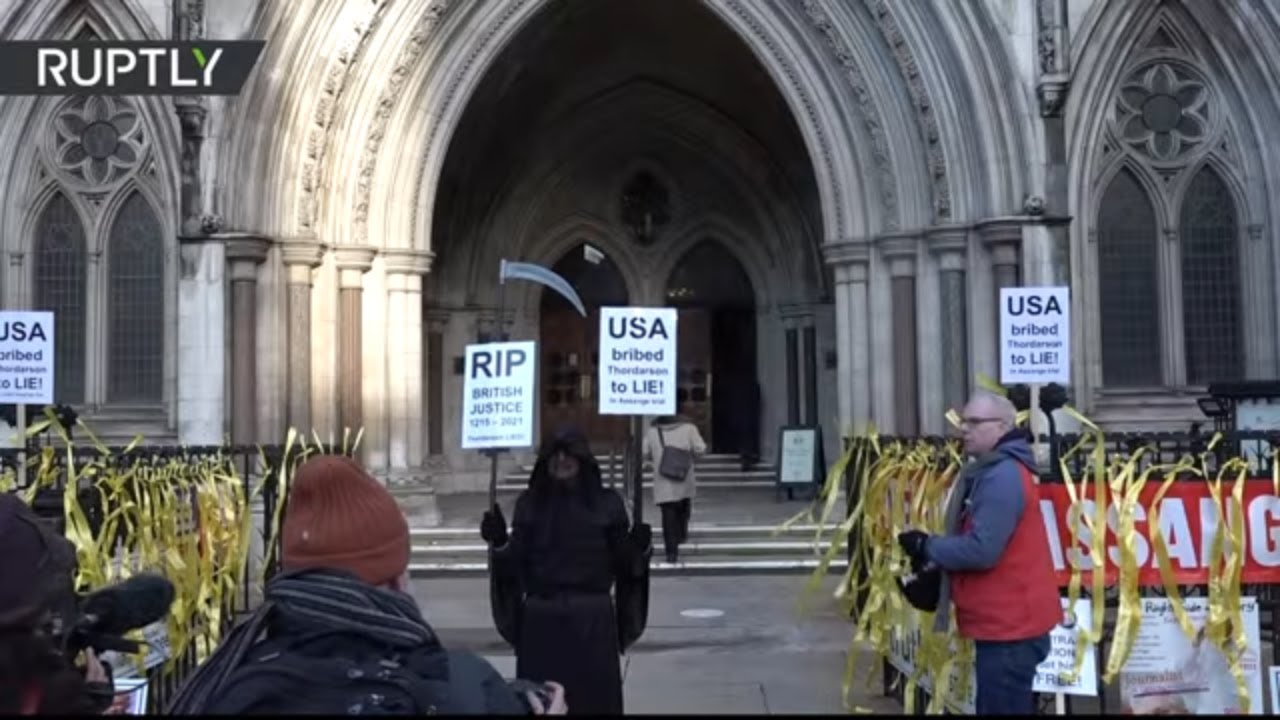 Above Photo: Screengrab of video showing “outside High Court As It Decides On Overturning US Extradition Ruling On Julian Assange”. RT / YouTube.

On Thursday afternoon I was in Edinburgh High Court to get back my passport, which had been confiscated during my own court proceedings avowedly to stop me going to Spain to testify in the trial of David Morales of UC Global. He stands accused by whistleblowers in his own company of spying on Julian Assange, his lawyers and other associates (including myself), on behalf of the CIA, and in engaging with them on plans to kidnap or assassinate Assange.

Having got my passport, I was wandering down the Canongate to buy a new sporran. I fear that I only wear my kilt on occasions where I end up not at all sober, and invariably spend the next morning wondering what on earth happened to my tie, left hose, mobile phone etc. The loss of a sporran is a particularly expensive experience. While explaining to the maker that my sporran needs a long chain to accommodate my finely matured figure, my phone rang and I was asked whether I could get to the High Court in London by 9.45am, as the judgement in the United States’ appeal in Julian’s extradition case was imminent. Waverley Station being a short walk down a steep close from the sporran maker, and with the agreement of Nadira and the rest of my long suffering family, I was off to England.

The Royal Courts of Justice have nothing of the grimness of the Old Bailey, or of Woolwich Crown Court inside Belmarsh Prison. They are Victorian Gothic at its least inspired and most gingerbread house cheesy, as though Mad King Ludwig was working on a straitened budget. Once inside there is no visible security of any kind, and the courtrooms are laid out in aged oak benches like the smaller lecture rooms of an old university.

A lovely man named Derek had been at the front of the queue for me since 5am, but his kindness turned out to be unnecessary. For the first time at any Assange hearing, nobody asked me for identification papers or fired inappropriate questions about why I was at a public hearing. At the reception desk I asked where the Assange judgement would be given, and was told Court No.1, but that there was no point in attending because copies of the judgement would simply be handed out.

I walked with my friend, Assange activist Deepa, to Court No.1 shortly after 9.30, and there was nobody else there except one reporter from Reuters. Over the next half hour about twenty other people turned up, mostly journalists but including a few European activists. There was no sign of Julian and no sign of either legal team. Julian’s fiancee Stella Moris arrived just before ten, and we were allowed in to the courtroom. The clerk of court told us there would be no lawyers present so we could sit anywhere we wished. Reporters and activists jumbled in the first two rows immediately below the judge’s bench. I sat alongside Stella in the fourth row, and shortly before the judge appeared, Gareth Peirce (Julian’s solicitor) arrived and simply took a seat also in the fourth row. The well of the court was perhaps a third full, and the public gallery above was completely empty.

It is important to explain that Stella did not know the judgement at this stage. We had spoken briefly before going in and we were not hopeful, but she sat there awaiting the decision on whether Julian might be home for Christmas, or potentially in jail for many more years, with enormous composure and self-control. I had spoken with her the night before on the telephone and knew she was in serious emotional distress. But here in public, she did not betray it at all.

Lord Justice Holroyde entered and read out a brief summary of the judgement. Lord Chief Justice Burnett, the other member of the two man panel, apparently had better things to do. It was evident after a few seconds that the insufferably smug Holroyde was going to find in favour of the United States Government.

Julian was not present, neither in person nor by videolink. That judgement should be given on a prisoner in the presence neither of himself nor of his counsel seems to me a quite extraordinary proceeding. The entire event felt wrong. I was aware that Julian was unwell, and that he had been very unwell at the hearing in October on which this was a judgement. Mary Kostakidis has constructed an edit of those tweets from her reporting on that day which referenced Julian’s state of health. What we did not know was that he was actually suffering a stroke.

What I can tell you from personal experience is that the appalling standard of healthcare is the single worst thing about prison, and the callous disregard of prisoners’ lives an ingrained feature of the system, about which I shall write more in due course.

So Holroyde briefly announced to the world the capitulation to the United States. His argument was simple and short. The High Court accepted that Baraitser had rightly judged the expert evidence on Assange’s health, so the diagnoses of serious depression and autism stand. However she had erred in not seeking diplomatic assurances from the United States that he would be kept in conditions that would not trigger suicide. Holroyde’s argument rested entirely on the Diplomatic Note received from the US government containing these assurances. They constituted, he stated, a “solemn assurance from one state to another”, as though that were a thing of unimpeachable surety.

Holroyde whisked away in a flurry of dusty robes and horsehair wiggery. Gareth Peirce had advance knowledge of the result, but had been barred from telling anybody. She had been informed lawyers were not to attend court, but had come along to offer moral support, and simply sat with the public. Edward Fitzgerald QC, Julian’s counsel, was simultaneously giving the decision to Julian in the jail.

My admiration for Gareth is undisguised. In my view she is the greatest UK lawyer of post-war history, a notion I know she would find laughable. I also know she will be a bit cross about my writing about her, as she detests the limelight. If you don’t know of her, do a little research just now. I have been extremely fortunate in life to know many great people, but Gareth is the one of whose regard I am proudest. Anyway, Gareth was really cross about the judgement.

The effect of the judgement is that the case is now returned to Judge Baraitser with the instruction to reverse her decision and order Assange’s extradition. In doing so she passes the papers up to the Home Secretary, Priti Patel, with whom the final decision on all extraditions lies. Julian has until 23 December to submit an appeal against this High Court decision to the Supreme Court, something he is minded to do.

Now read this very carefully. The United States Government’s appeal to the High Court was only on those points on which Baraitser had ruled against extradition – Assange’s mental health and the effect upon it of extradition and US prisoner conditions. Assange’s appeal now to the Supreme Court will also be restricted to those subjects. The points on which Baraitser originally ruled in favour of the United States, including Assange’s First Amendment protections and the right of freedom of speech, the bar on political extradition and the inapplicability of espionage charges to journalism – will only be heard later, if he loses at the Supreme Court on what is still the US appeal.

If the Supreme Court decides for the US on the basis of diplomatic assurances, and the case returns to Baraitser to exercise the extradition warrant, at that time we finally have the cross appeal on all the issues this case is really about. If the High Court then accepts the cross-appeal as arguable (and Holroyde stated specifically that Assange’s wider points of appeal “would be heard at a later stage in proceedings”), then Patel’s trigger itching hand will be stayed while we restart the appeals process, quite possibly back to Holroyde and Burnett.

This benefits the Machiavellian state in two ways. For up to another year the legal argument will continue to be about Julian’s mental health, where the self-disparagement required by his defence suits the state political narrative. Nobody inside court is currently permitted to be talking about freedom of speech or the exposure of US war crimes, and that of course feeds in to the MSM reporting.

The state also is happy that this convoluted Supreme Court and then cross-appeal process will last for years not months, even before we look at the European Court of Human Rights, and all that time Julian Assange is stuck in high security in Belmarsh jail, treated as a terrorist, and his mental and physical health are visibly deteriorating in a way that is simply horrible. It is not hyperbole to state we may well be watching his slow murder by the state. It certainly appears now probable that he will never fully regain his health. The Julian who went into captivity is not the same man we would get back if ever released.

My worry is that I have no confidence that there is any hope of fairness in the judicial process. I most certainly would not wish anybody’s destiny in the hands of the supercilious Holroyde. There seems no alternative but to batter on through the endless Jarndyce vs Jarndyce, but I fear we are but dignifying a cruel charade. Political will, rather than judicial sense, appears the more likely route to a breakthrough. But I look at Johnson, Biden and Morrison and I see no more conscience, principle or probity than I do on the judicial bench.

There does appear to be a recognition in the mainstream media that aspects of the prosecution are a real threat to journalism even in the muted way that the mainstream media pursue the profession. Persuading the fourth estate to use their influence on key politicians, backed by popular mobilisation including online, appears to be the most hopeful tactic at the moment. But it is a hard and bitter slog.

On leaving the High Court, Stella and I both gave impromptu speeches to the waiting crowd and media. The BBC carried this live until I mentioned US war crimes, when they hurriedly cut it off. These below are the full speeches, and the video should start at the right point. We had come straight from consulting with Gareth after hearing the judgement, so remember what I have told you and consider how extraordinarily well Stella coped and spoke here. How can we not continue to fight?

Forgive me for pointing out that my ability to provide this coverage is entirely dependent on your kind voluntary subscriptions which keep this blog going. This post is free for anybody to reproduce or republish, including in translation. You are still very welcome to read without subscribing.

Unlike our adversaries including the Integrity Initiative, the 77th Brigade, Bellingcat, the Atlantic Council and hundreds of other warmongering propaganda operations, this blog has no source of state, corporate or institutional finance whatsoever. It runs entirely on voluntary subscriptions from its readers – many of whom do not necessarily agree with the every article, but welcome the alternative voice, insider information and debate.