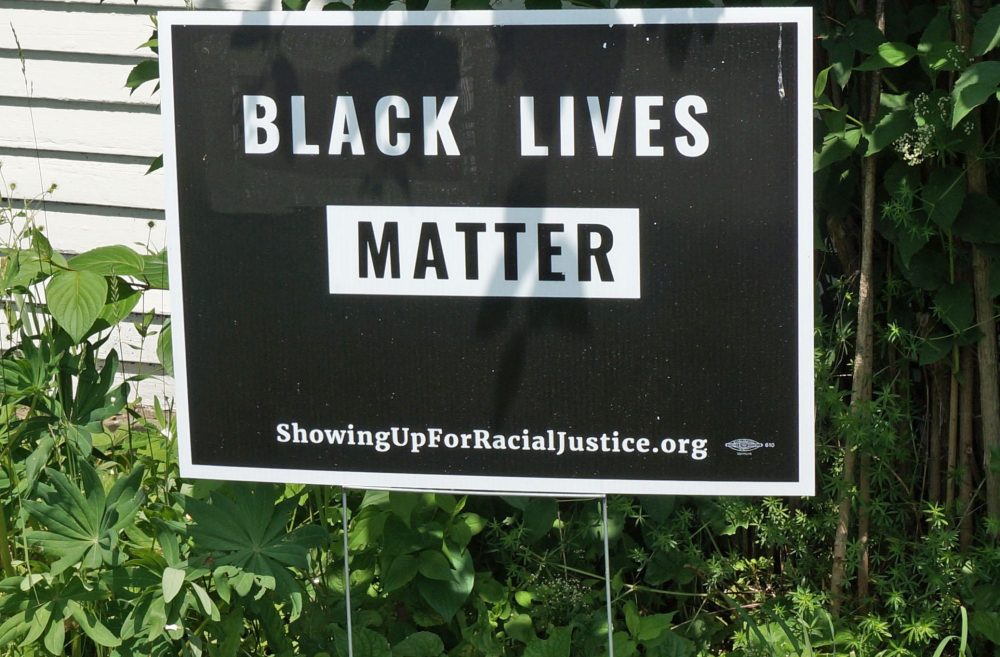 Above photo: Black Lives Matter sign in front of house.

Being anti-racist means making places safe for Black people to inhabit. Without that, BLM yard signs are just performative allyship.

While I was living in Portland, Oregon, I was asked to teach To Kill a Mockingbird to a group of middle schoolers during a Black History Month freelance gig. The students were bright and eager. When I asked them what they knew about the history of racism in America—slavery, segregation, Jim Crow and Civil Rights—their arms shot in the air resolutely, in that endearing way we’ve all lost by our freshman year of high school.

Those are all things that happened in “The South,” Ms. Lawson, the kids parroted in the ignorant haze that is how most kids in this country are taught to think about its racist past.

But, little friends, Ms. Lawson is from “The South,” I answered. They scrunched up their noses and cocked their heads to one side. They didn’t believe me. To their credit, I don’t fit the image of what most people think a southerner looks or sounds like—one concocted mostly from books and movies and inherited prejudices—but here I am. I grew up in Kentucky and went to college there. I once saw some neighbors hang a bobblehead toy of a black basketball coach in effigy after the team lost a championship game. I went to graduate school in Indiana; technically not the South, but a state that often vied with Kentucky for the dubious distinction of being the ancestral home of the Ku Klux Klan.

Yes, I told my wide-eyed students, Ms. Lawson grew up in the South. I walked to the back of the classroom to place my hand on the fried-drumstick shape of Kentucky on the wall map. And so often she hears people talk about “The South” as if it is this place full of evil, racist, bad people. But I want you to know To Kill a Mockingbird isn’t a famous book about “The South,” it is a famous book about America, an America in which, less than 50 years ago, Ms. Lawson would not have been able to be your teacher. Right here. I scanned the room of predominantly white upper-class students. How many of you have parents, grandparents, friends who are 50 years old? Half the kids raised their hands.

What I knew that my students didn’t is that American racism has never been exclusive to the region. I considered showing them a photograph from a 1921 edition of Portland’s newspaper, the Portland Telegram, in which Ku Klux Klan members in full regalia stand beside the mayor and prominent government officials. “Chief Kluxers Tell Law Enforcement Officers Just What Mystic Organization Proposes to Do in the City of Portland,” the caption reads. I thought about sharing this image with them, but I did not.

Ms. Lawson, it has come to our attention that some of our students have been … disturbed … by your teaching of To Kill a Mockingbird, the principal said after inviting me in for a chat.

I’m so glad that you mention it … sir … I have had my reservations about teaching a book with such mature subject matter to seventh graders.

—Mature—Ms. Lawson, that’s beside the point. We’re concerned that you’re focusing too much on the … racial … elements of the book.

The “racial elements” … of … To Kill a Mockingbird?

—Ms. Lawson, we’ve been teaching Lee’s classic here for years now, and we’ve never gotten so many … complaints. … Our parents are unsettled by their children’s interest in the racial nature of the book, and this is becoming a cause for concern.

Yes, I do agree the racial nature of the book is a cause for concern.

—Shayla, we didn’t hire you to teach To Kill a Mockingbird as a book about “race.”

—As an educator myself, I strongly disagree.

If To Kill a Mockingbird is not a book about race, what is the story? He opened his mouth to answer, scrolling through his cursory remembrance of the beloved novel: trawling through the high grass of Maycomb, Alabama, with Scout, attempting to catch a glimpse of Boo Radley. He replayed his favorite scene from the iconic movie—Gregory Peck’s closing argument—its monolithic depiction of white goodness firmly ensconced in his mind.

It can be hard to talk to people like this, people so squarely convinced they stand on the right side of the racial divide they will do anything to protect it. We’ve migrated into a time in which it is more important for people to feel not-racist than it is for them to act not-racist. It almost makes me miss the times in my life when people felt entitled enough to spew their racist hatred from their neighborhood porches. Or maybe not—our country’s last 10 years have offered up enough new atrocities that I needn’t feel wistful for blatant racism, as if it’s some distant recollection of the past.

“We’re clearly not in a post-racial America,” stated publicist Rachel Noerdlinger on the Melissa Harris-Perry show in 2013. “We’re in a post-Trayvon Martin America.” As much as it pains me to use the death of a young boy—a boy the same age as many of the students I’ve taught over the years—as the touchstone of an era, I fear she’s right.

Oregon was established as a white utopia on the North American continent. Laws prohibiting black people to take up residence in the region go back to 1844, 15 years before the West Coast territory ever became a state. In service to its original utopian mission, Oregon kept the zoning laws relegating people of color to specific neighborhoods on the books well into the mid- and late twentieth century.

During the 1940s, black people moved from the southern United States to the north, Midwest and Pacific Northwest as part of the Great Migration. Vanport, located just north of Portland’s Albina district, became a popular destination during World War II because of the shipyards along the Columbia River and because it was one of the few places in the country offering all its employees equal pay, regardless of race. The shipyards employed so many people that the government built wartime public housing for the migrants. Oregon, a state whose racist policies made it impossible for black people to live there, went from having about 1,800 black residents in 1940 to more than 15,000 by the time the war ended. Vanport had become the second-largest city in Oregon and home to Vanport College (which later grew into Portland State University) and to the largest federal housing project in America.

Vanport’s black shipyard employees were essential during the war. But when the war ended and the shipyards closed, Portland wasn’t particularly keen on its new dark neighbors. Although by 1947, African Americans composed, depending on reports, as little as 17%—or at most 35%—of the total population of Vanport, wealthy Portlanders lodged a campaign against the housing project with the goal of closing it. Portland, a city that had, up until that time, maintained its idyllic image as a white utopia, considered the Vanport housing project a physical manifestation of the black public scourge. Vanport was also home to war veterans, Vanport College faculty, white shipyard workers and all these men’s families (as was reported by Portland newspaper the Oregon Journal in articles and op-eds during the time, which refuted Vanport’s presence as a crime-infested community eyesore). But, unlike for these white inhabitants—many of whom moved into Portland as the shipyards laid off employees—Portland’s strict regulations around where black people could live made migration into the city almost impossible.

On Memorial Day in 1948, the two rivers that flanked Portland and Vanport reached flood height. Vanport lay in the basin of the flood zone, and Housing Authority of Portland officials knew that its cheaply built tenements wouldn’t survive a flood. But they did not say this to its residents. In fact, with the flood imminent, Vanport residents woke up to signs posted all over their neighborhood reading, “Remember. Dikes are safe at present. You will be warned if necessary. You will have time to leave. Don’t get excited.” By 4:17 p.m., the dike broke, and within 10 minutes, the entire town was swept away by the flood. The people managed an emergency evacuation. But Vanport disappeared.

When I moved to Portland, I didn’t know I was just another instrument of the city’s ongoing black erasure, but I should have guessed. I spent a lot of time there walking the streets wearing a hood, often at night. Doing this makes me acutely aware of the dangers of being alone and black at night, especially in the places we think of as America’s “good,” “safe” neighborhoods. After a few months of walking in the dusk in Laurelhurst, where my black dog and I made up the entire black population, the neighborhood started to feel less idyllic and more menacing. I encountered one too many Stepford-looking couples eager to interrogate me as I attempted to pass their homes, the wife on her knees cutting shrubbery, the husband holding a watering hose over the lawn.

There is absolutely nothing more important to the liberal residents of my gentrified neighborhood, one littered with Black Lives Matter signs, than to protect their sense of feeling “not racist,” despite their inhospitable prejudices against our presence. In this, Portland is not alone. Cities across America are carving liberal, predominantly white, enclaves out of what used to be socially and culturally mixed, or predominantly black, neighborhoods. But I question Portland’s loyalty to the cause of Black Lives Matter.

In the summer of 2017, the FBI marked Black Lives Matter as a terrorist organization, a “Black Identity Extremist” group. This labeling should scare all Americans, but it should surprise none of us. I never once believed my neighbors kept their impeccable Black Lives Matter yard signs up as a sign of true protest. Black Lives Matter yard signs mattered to my neighbors because, in a world increasingly interested in protecting the rights of a select few, they were looking for ways to feel safe from white guilt. They didn’t want to take a hard look at how they too are contributing to this country’s undoing, by actively benefiting from the comfort of exclusionary liberal white communities. Communities that don’t have to confront their blatant discrimination because they are not forced to ask themselves if the way they treat their nonwhite neighbors is right. They stay inside their houses, believing they are protecting American democracy like the Constitution-quoting Atticus Finch. Black Lives Matter yard signs do, on their lawns, what signs have always been designed to do: maintain control, to keep whatever is outside out.

Despite my having grown up in the South, Portland is the most racist place I have ever lived. This is because being anti-racist isn’t about using politically correct buzzwords and giving lip service to sensitive conversation topics. Being anti-racist is about constructing a landscape that is safe for dark people to inhabit. It is not about white people trying to prove they are “woke” by putting up yard signs. That is not even what “woke” means. “Woke” is a territory of open-eyed, unsuperficial, cultural awareness white people are nowhere close to occupying; they are not even in the neighborhood. But being anti-racist in this dangerous era is something they can do, by going out of their way to make nonwhite people feel safe.

Adapted from Shayla Lawson’s This Is Major, for sale now from Harper Perennial.