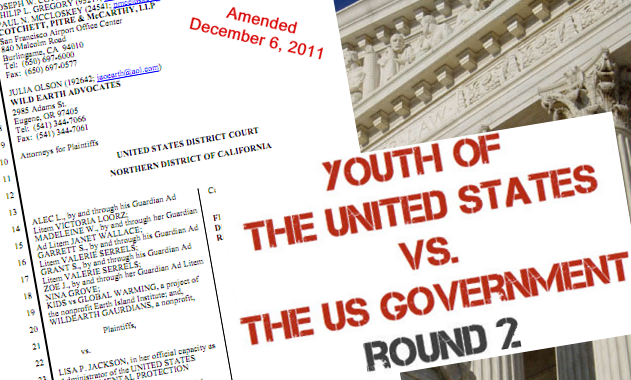 “Our Children’s Trust” is arguing in the US Court of Appeals for the District of Columbia that the federal government be required by the court to implement a comprehensive Climate Recovery Plan. The youth are appealing the district court’s dismissal of their “Atmospheric Trust” case, continuing their fight to protect their climate and their fundamental constitutional rights as young U.S. citizens

They describe the details of the law suit:

Five individual teenagers, and two non-profit organizations representing thousands more young people, Kids vs. Global Warming and WildEarth Guardians, partnered with OUR CHILDREN’S TRUST to file this federal lawsuit now pending at the U.S. Court of Appeals for the D.C. Circuit. The youth seek to require the federal government to immediately plan for national climate recovery according to the scientific prescription of Dr. James Hansen and other leading international climate scientists that will restore our atmosphere to 350 parts per million (ppm) of CO2 by the end of the century and avoid the disastrous scenarios of 2°C of warming. This lawsuit relies upon the long-established legal principle of the Public Trust Doctrine, which requires our government to protect and maintain survival resources for future generations. At oral argument on May 2, 2014, youth will ask the U.S. Court of Appeals to recognize their constitutional right to a healthy atmosphere and stable climate system.

Nineteen year-old Alec Loorz, lead plaintiff on the federal case and co-founder of iMatter, said in a press release: “The U.S. government has an obligation to reduce greenhouse gas emissions in line with what science says is needed to protect our future and prevent catastrophic climate change. We need the courts to tell the executive and legislative branches to do their job and meet their obligations. I’m hopeful our team of attorneys can take this all the way to the U.S. Supreme Court.”

“Averting a human-made climate crisis should be a matter of carbon science, not carbon politics,” observed Phil Gregory, a partner with Cotchett, Pitre & McCarthy, counsel for the plaintiffs. “Neither Congress nor the President are taking the steps necessary to avert a human-made climate disaster. It is up to our courts to put politics aside and protect our essential natural resources for our youth and future generations.”

The group notes that on June 25, 2013, the President repeatedly noted the need to act on climate change for the benefit of current and future generations, and even asked citizens to compel governments to do what this movement demands. Noting that our founders envisioned government officials not only as “custodians of the present” but also as “caretakers of the future,” President Obama said that our children and our grandchildren will one day ask us if we did “all that we could when we had the chance to deal with this problem and leave them a cleaner, safer, more stable world?”

“The Obama Administration has failed to develop, let alone implement, a climate plan that will actually protect our generation,” said Loorz, in announcing the filing of the appeal. “The youth of America are forced to look to the courts to protect our constitutional right to clean air.  Loorz noted, “While President Obama has adopted the language in our lawsuit, the President’s plan lacks any specifics based on scientific standards. For example, he fails to define the emission reductions urgently needed to preserve our climate system and protect my generation and those to follow. At best, the measures he outlines would reduce national emissions only 17% by the end of the decade. All the major scientists agree: that reduction is not enough to address the climate crisis we face today. We are confident that a favorable decision in the appellate court will give the Executive branch a tool both to help implement the President’s Climate Action Plan, and to strengthen it. A strong plan will require our nation to reduce our energy use and carbon emissions at the rate scientists say is necessary to preserve the planet for future generations.”

Oral argument will be heard in the youth’s appeal to the D.C. Circuit Court of Appeals at 9:30 am, before Chief Judge Garland, Circuit Judge Srinivasan, and Senior Circuit Judge Ginsburg.

**UPDATE: The Court issued an order on April 24th announcing that they no longer wanted to hear oral arguments and that they intend to decide the case on the written briefing. Youth filed a motion to reconsider, emphasizing the importance of oral arguments in this case.

Youth file their reply brief in their appeal to the D.C. Circuit Court of Appeals.

Washington, D.C. – Today, prominent groups and individuals across the nation showed their broad-base support of the young people suing the federal government for not acting to reverse climate change. National security and political leaders, religious groups, scientists, legal scholars, conservation and social justice organizations, and native communities came together to file seven amicus curiae (“friend of the court”) briefs in support of the youth appellants’ appeal to the U.S. Court of Appeals for the District of Columbia. Read the press release!

**UPDATE: The Court refiled a shorter version of their amicus curiae brief with the court.

Here’s what Karl Coplan, Professor of Law at Pace Law School in New York had to say about the youths’ case:

“This case, which seeks to establish constitutional protections for future generations in the same way that Brown v. Board of Education established equal protection for African Americans, may be the most important appeal the D.C. Circuit Court of Appeals hears for a very long time to come. The sovereign Public Trust principles at issue in the case are part of the constitutional bedrock of our nation, recognized by our founders, and they support the conditions that our youth need in their future. We believe the Constitution was formulated to limit the power of one generation to undercut the endurance of the nation and deprive posterity of the conditions necessary for citizens to survive and prosper.”

NATIVE COMMUNITIES FILE AMICUS BRIEF: The National Congress of American Indians, along with many other supporters of Native communities in the United States filed their amicus curiae brief in support of the young people. Through their brief, the amici seek to ensure that in deciding the youths’ case the court understands the unique impacts of climate change on Native Nations and how the law applicable to Indian Country varies from the law applicable elsewhere. Read the brief.

GOVERNMENT OFFICIALS FILE AMICUS BRIEF: Government officials from around the country filed their amicus curiae brief in support of the young people. Check out the brief.

YOUTH APPEAL DECISION IN LANDMARK FEDERAL CONSTITUTIONAL LITIGATION CONCERNING CLIMATE CHANGE
Washington, D.C. – Today, youth plaintiffs took their lawsuit to the U.S. Court of Appeals for the D.C. Circuit, demanding the appeals court issue a decision ordering the Obama Administration to immediately implement a comprehensive Climate Recovery Plan. The youth are appealing the district court’s dismissal of their “Atmospheric Trust” case, continuing their fight to protect their climate and their fundamental constitutional rights as young U.S. citizens.
The Obama Administration has failed to develop, let alone implement, a climate plan that will actually protect our generation,” said Alec Loorz, founder of Kids vs Global Warming, in announcing the filing of the appeal. “The youth of America are forced to look to the courts to protect our constitutional right to clean air.

Youth plaintiffs filed a motion to reconsider a decision by the U.S. District
Court for the District of Columbia not to hear their claim that the federal government has a
constitutional responsibility to protect the atmosphere on behalf of present and future
generations.
Read the supporting brief and press release.

Today the District Court for the District of Columbia issued a decision granting the government defendants’ and fossil fuel intervenors’ motions to dismiss the youth plaintiffs’ case. Read the press release.

We are obviously disappointed. Let me first say we are so proud of the youth of our nation for standing up and pursuing the only remedy that allows them a future life and planet they have a right to inherit. Regarding the decision, we respectfully disagree with the court as to the scope and effect of the federal Public Trust Doctrine. However, we agree with Judge Wilkins that “this case is about the fundamental nature of our government and our constitutional system.” That system mandates protection of our fundamental right to a healthy atmosphere, on which humanity depends. We continue to believe we are legally correct and we will be continuing our efforts on behalf of our nation’s youth.

The court wants us to find or even “seize” common ground with the fossil fuel industry and government. But I believe that as long as these institutions value profits and power over the survival of my generation, there can be no common ground. The government may say that we need to do something about the climate crisis, but when they continue to do nothing, the courts have to step in to protect us. That didn’t happen today, but we will not give up. Our futures are at stake. We will continue fighting to protect our planet for our generation . . . and all who follow, for as long as it takes.

Media Advisory for May 11th ATL Hearing in D.C. on Defendants’ Motion to Dismiss.

The hearing on the Defendants’ Motions to Dismiss the case is set for May 11th in D.C. Come support the youth! And check out Alec Loorz, explaining the the significance of this hearing: