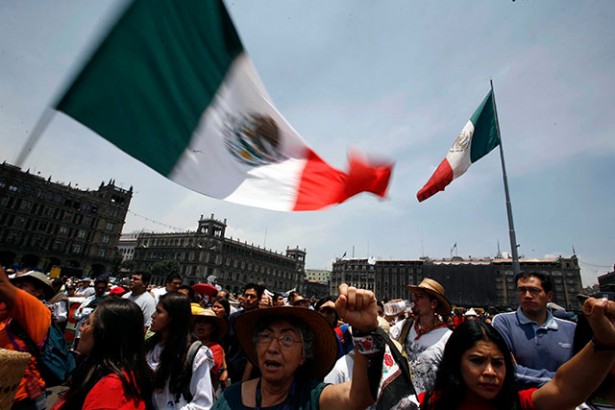 Above Photo: Zapatistas march during an election day protest in Mexico City on Sunday, July 2, 2006. The Zapatistas and Indigenous Congress will use the 2018 presidential elections to galvanize popular organizing from below. (Photo: Janet Jarman / The New York Times)

Note: On October 18th, the Zapatista Army for National Liberation, the National Indigenous Congress and other Indigenous Groups published a a communique to the people of the world entitled, “MAY THE EARTH TREMBLE AT ITS CORE.” The statement came out of the Fifth National Indigenous Council held from October 9-14.  They describe how they have been building communities of resistance and list some of the violations of their rights and their property that have occurred; concluding with the following:

“Given that the offensive against the people will not cease, but rather grow until it finishes off every last one of us who make up the peoples of the countryside and the city, who carry profound discontent that emerges in new, diverse, and creative forms of resistance and rebellion, this Fifth National Indigenous Congress has decided to launch a consultation in each of our communities to dismantle from below the power that is imposed on us from above and offers us nothing but death, violence, dispossession, and destruction. Given all of the above, we declare ourselves in permanent assembly as we carry out this consultation, in each of our geographies, territories, and paths, on the accord of the Fifth CNI to name an Indigenous Governing Council whose will would be manifest by an indigenous woman, a CNI delegate, as an independent candidate to the presidency of the country under the name of the National Indigenous Congress and the Zapatista Army for National Liberation in the electoral process of 2018. We confirm that our struggle is not for power, which we do not seek. Rather, we call on all of the originary peoples and civil society to organize to put a stop to this destruction and strengthen our resistances and rebellions, that is, the defense of the life of every person, family, collective, community, or barrio. We make a call to construct peace and justice by reweaving ourselves from below, from where we are what we are.

“This is the time of dignified rebellion, the time to construct a new nation by and for everyone, to strengthen power below and to the anticapitalist left, to make those who are responsible for all of the pain of the peoples of this multi-colored Mexico pay.

“Finally, we announce the creation of the official webpage of the CNI: www.congresonacionalindigena.org”

After two decades of declining to engage with electoral politics in Mexico, the Zapatista Army of National Liberation (EZLN) and the National Indigenous Congress of Mexico (CNI) have announced their plans to form a national Indigenous governing council and choose and support an Indigenous woman candidate in the 2018 Mexican presidential elections. For many longtime supporters of the EZLN and CNI, the October 14 announcement came as a surprise, given these organizations’ consistent and staunch critique of electoral politics.

The EZLN and CNI have long advocated for the right of Mexico’s Indigenous peoples and other marginalized communities to govern themselves autonomously from the Mexican state. Given this well-known and unwavering political commitment, why have the EZLN and CNI decided to enter the 2018 elections? Does this represent a rejection of their commitment to autonomy? Nothing could be further from the case. In fact, their October 14 communique reiterates their rejection of taking state power:

We confirm that our struggle is not for power, we do not seek it. Rather, we call on all of the original peoples and civil society to organize to … strengthen our resistances and rebellions, that is, the defense of the life of every person, family, collective, community, or neighborhood. To construct peace and justice by weaving ourselves together from below, from where we are what we are.

What may at first appear as a paradox — a campaign for the presidency that is not interested in gaining the power of the presidency — in fact invites a deeper reflection on the nature of politics, the meaning of national elections and the possibilities for a different Mexico.

The EZLN and CNI’s proposed presidential campaign appears paradoxical when one views it through a strictly institutional lens that considers national elections as straightforward state mechanisms for choosing the next president. This lens does not see the broader significance of elections as national cultural and media events, where a large portion of the Mexican population imagines what could be different in the next six years.

The October 14 communique makes clear that for the EZLN and CNI, the goal of an electoral campaign is not to take control of existing government institutions; rather, it is to use the election as a pretext for popular organizing from below. With their campaign, they are proposing a different possibility for the future of Mexico. But what exactly would this different future look like?

A Candidate Who Is Not a Candidate

The EZLN and CNI are not asking the Mexican public to choose a specific person to take the reins of the presidency; rather they are asking the public to choose a different form of politics that has been developed for the past 20 years in Zapatista territory in Chiapas and in the numerous Indigenous tribes and nations that make up the CNI.

The exact text of their announcement states that they will “name an Indigenous Governing Council whose words will be manifested through an indigenous woman, a CNI delegate, who will run as an independent candidate for the presidency in the name of the National Indigenous Congress and the Zapatista Army of National Liberation in the electoral process of 2018.”

Their candidate will not be a candidate in the traditional sense; she will be the spokesperson for a national Indigenous governing council organized outside the institutions of the Mexican state. She will represent a rejection and redefinition of Mexican democracy: instead of rule by a male mestizo political elite, she will represent the leadership of an Indigenous woman who will speak in the name of a democratic council of Mexico’s Indigenous communities. The communique makes clear that this council will be organized in the coming year through a process of consultation and direct democracy that includes all the Indigenous communities throughout Mexico that have delegates in the CNI. In fact, this process may result in an entirely different initiative in the 2018 elections. The communique emphasizes that even the proposal to choose an Indigenous governing council and Indigenous woman candidate must first be approved by every community in the CNI before it can move forward.

The CNI has slowly developed its system of democratic decision-making and community consultation over the past 20 years. The CNI grew out of the 1996 peace dialogues in San Andrés, Chiapas, that brokered a cease-fire between EZLN and government forces. During these dialogues, the EZLN insisted on the inclusion of all the Indigenous peoples of Mexico. The EZLN knew that the lack of self-determination and desperate poverty that spurred their uprising were common conditions throughout Indigenous Mexico. The dialogues resulted in the San Andrés Accords, which promised a reform of the Mexican constitution guaranteeing the right to Indigenous autonomy and self-government.

In her book, The Fire and the Word: A History of the Zapatista Movement, Gloria Muñoz Ramírez explains that the Indigenous groups that collaborated with the EZLN during the dialogue process formed the CNI to struggle alongside the EZLN for the implementation of the accords. This struggle continued in the following years, during which the Mexican government constantly violated the cease-fire with military and paramilitary aggressions against Zapatista communities. In 2001, all three Mexican political parties, including the supposedly leftist Party of the Democratic Revolution (PRD), refused to implement the San Andrés Accords, and instead passed a watered-down “Indigenous rights” law that did not place the right to Indigenous self-government in the Mexican constitution. The EZLN has completely rejected engagement with the Mexican political establishment since this betrayal.

The betrayal of the San Andrés Accords only strengthened the EZLN’s commitment to self-determination for the Indigenous peoples of Mexico and re-invigorated their struggle for autonomy in their communities. The Zapatista communities of Chiapas have slowly developed a practice of direct communitarian democracy over the past 20 years. Since the EZLN’s 1994 revolution, they have sought to build an autonomous political system and have eschewed strategies aimed at controlling existing state institutions. Their foundational revolutionary laws established local governing bodies that made decisions through popular assemblies in each locality, and for the past 20 years, they have developed this autonomous organizational structure creating more than 30 autonomous municipalities that were grouped into five zones in 2003 under the authority of five “good government councils.”

Similarly, the numerous Indigenous tribes and nations that make up the CNI have followed the EZLN’s example and altered it to fit their own traditions and contexts. For example, in 2011, residents of the Purépecha town of Cherán organized their own community self-defense force, expelled all political parties from their community and now govern themselves through their own system of direct democracy. Their uprising came in response to illegal logging in the town’s forests by organized crime groups with the support of local police and politicians. Similarly, the 33 Mexican Indigenous groups that attended the most recent gathering the of the CNI all have parallel struggles that center around local democratic organizations rejecting and resisting attempts to impose resource extraction or mega-construction projects in their territories.

Proposal for a National Participatory Democracy

The CNI and EZLN have sought to build local democratic governments that, in their words, “govern by obeying” — whose every decision obeys the will of the community where they govern. This form of democracy is the EZLN and CNI’s proposal for the future of Mexico. Rather than lining up behind an individual candidate, they are proposing a candidate as a spokeswoman for this slow democratic process in which each community approves all government decisions according to their own Indigenous or local customs and democratic organizations. With their presidential campaign, they are hoping to expand their movement for a democratic Mexico beyond their individual territories to create a new form of politics that would include the voices of all Mexicans.

What this new form of politics would look like is still an open question that will be answered in the collective voice of the Mexican people, not just in the voice of the EZLN or the CNI. This presidential campaign is an open call to redefine Mexican politics “from below,” from the perspective of those who are marginalized by the current Mexican political establishment. As Subcomandante Galeano wrote in a recent communiqué elaborating on the EZLN and CNI proposal, “If the mere possibility of an indigenous woman existing as a citizen (with all of its rights and obligations) has the effect of causing ‘the earth to tremble at its core,’ what would happen if her ear and her word traveled through all of Mexico below?”