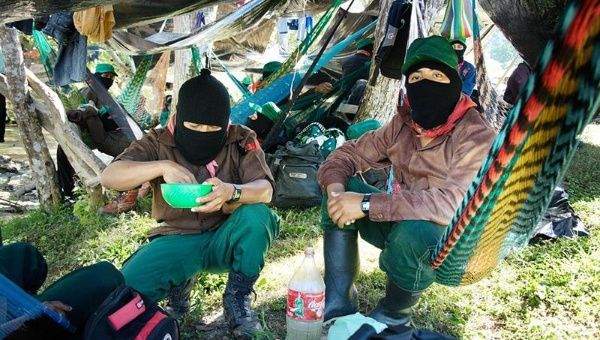 “It’s not easy to face political parties and bad governments are the current one: dishonest and deceitful,” said Subcomandante Moises.

“We will fight, we will face, we won’t allow him to come here with his destructive projects,” said Subcomandante Moises, without naming Lopez Obrador directly, at the closing ceremony of the 25th anniversary celebrations. “We don’t fear his National Guard, a name chosen instead of army.”

Supporters had been at Guadalupe Tepeyac, part of the autonomous territories, along with members and representatives of the EZLN and support bases discussing future steps in the anticapitalist revolutionary struggle.

They later moved to La Realidad, a meeting point for regional autonomous governments, to celebrate the 25th anniversary of the Zapatista armed uprising on January 1.

The government of Lopez Obrador proposed the creation of the National Guard, a 50,000-strong security force that will be trained and commanded by the military to carry out public security duties.

Detractors describe it as a move to perpetuate and legalize militarization in the country, while supporters argue it’s a necessary move.

Lopez Obrador had been a strong critic of militarization, a process that started in 2006 with Felipe Calderon’s ‘war on drugs.’ “Bringing the military back to the barracks” was one of his main demands in the opposition.

Now, the new president and his National Regeneration Movement (Morena) are pushing to reform the constitution to allow the military to assume public security duties.

Subcomante Moises, one of the two spokespersons of the EZLN along with Subcomandante Galeano, said the new center-left president will “destroy the people of Mexico, but mainly the oridinary people. They come for us, especially the EZLN.”

The Zapatista movement has always been at odds with Lopez Obrador. Since the first time he ran for president in 2006, the EZLN organized an alternative campaign and declared its opposition to the leftist candidate. Now, with its landslide victory in the 2018 elections, the Zapatistas have reiterated their position.

“The consultation they’re doing aims to manipulate the people,” said Moises. “Through votes, they’re asking for permission to attack us. They’re consulting so they come and face us with that Maya Train crap, but if they provoke us we will defend ourselves. We won’t allow someone to come here and take this rebel territory.”

The Maya Train is a large-scale infrastructure project proposed by Lopez Obrador to connect the whole Yucatan Peninsula for tourism, transportation and economic purposes.

To continue with it, Lopez Obrador called for a national consultation by late November, with an outcome of 89.9 percent in favor.

According to the International Labour Organization’s (ILO) Convention 169 , Indigenous peoples should be consulted by governments over any project related to their territory. But Lopez Obrador’s consultation was at a national level, ignoring the established protocol.

To mark the start of the project, Lopez Obrador held a traditional ceremony “to ask Mother Earth for permission” with sympathizing local Indigenous leaders and organizations, a move that was criticized by many because “Mother Earth couldn’t give him an answer.”

The EZLN called Lopez Obrador a trickster. “The one in power is treacherous,” said Moises. “He says he’s with the people of Mexico and keeps tricking the Indigenous people, bowing to Earth asking it for permission and saying that all Indigenous peoples believe him, but we tell him we don’t believe him.”

Instead, the Subcomandante remembered the EZLN’s achievements in 25 years of struggle: “Our work and effort, with our mistakes.”

“Everything we’ve built, we’ve carried it ourselves. There are solidary sisters and brothers that have helped us, but it’s not easy to face political parties and bad governments are the current one: dishonest and deceitful.

“Five years ago we told the people of Mexico that a worse thing would come. A collapse, a hydra, a monster, a wall. We told them, but they didn’t listen. They listen to that whose name I don’t want to name.”

The Indigenous organization also criticized other projects promoted by Lopez Obrador, such as the promise to cultivate a million hectares of fruit and wood trees in Chiapas, sacrificing native rain forests.