Thousands of women met in Zapatista territory against capitalist and patriarchal society.

Thousands of women from all around the world met in Zapatista territory to participate in the first Women in Struggle International Summit, hosted by Mayan Zapatista women.

The Zapatistas say over 5,000 women came to the Caracol of Morelia for the summit, which took place between March 8 and 10. Women started gathering in Caracol, located in a remote area of the Tzotz Choj zone of Chiapas, one day before the opening ceremony to begin arranging accommodation for themselves at the designated shelters or set up tents.

“I think the general feeling was being comfortable and safe,” said Berenice, a young filmmaker attending the summit, “I played soccer with a lot of different women and with a Zapatista team. We realized we share common problems everywhere and it was very interesting to see how each one of us face those problems.”

For the closing ceremony, Mayan women wearing black balaclavas read a collectively written speech thanking all women from the organizing staff and the Zapatista women that didn’t attend the summit because they needed to take care of their families, animals or barracks.

Then they proceeded to reflect on the critisim and complaints they got from attending women, saying they didn’t have any manual on how to organize an international summit for women, and that they would take them into account for any next meeting.

But for them, the most important thing was the participation of women from all around the world in a historical event full of rebelious spirit. “We saw and listened to you all, because if not you would’ve come here in vain, and what’s fair is that we listen and see you all, even though we agree or not with what you say.” 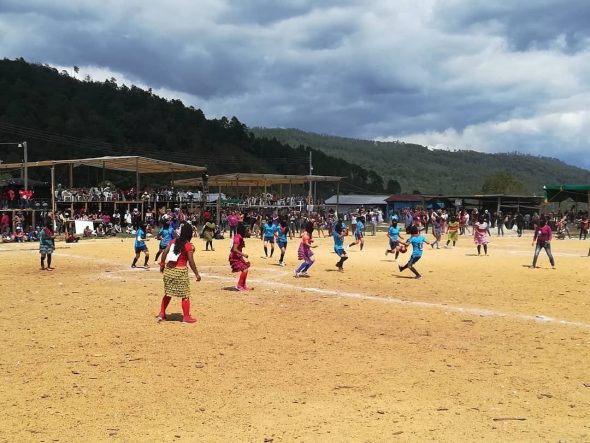 More than 2,000 Zapatista women from all the five Zapatista Caracoles, the term they use to call their regional autonomous governments, took part in the activities and organization of the event, momentarily leaving off their daily duties.

Zapatista women met for months in the different Caracoles to discuss and organize the summit, recognizing they normally take a lot of time to agree on small things and that an event as big as this took them even more time to organize.

“But anyway imagine, sisters and comrades, this what we’re saying, we are saying as zapatista women, saying it while they are giving you a hug and telling you to the ear, in your language, in your way, at your time:

and that way, with these words we’re telling you

‘Thanks sister, thanks comrade.”

They then invited all women to think collectively if the imposed capitalist and patriarchal system was the root of their pain. If so, then they could agree to fight against “capitalist patriarchy” or any patriarchy.

To close the ceremony, the masked woman called for a next summit to be celebrated on 2019, but one to be celebrated all over the world, not only in Zapatista territory. A summit organized in “each one of your worlds, according to your times and ways, meaning each of you will organize women in struggle summits or how ever you want to call them.”