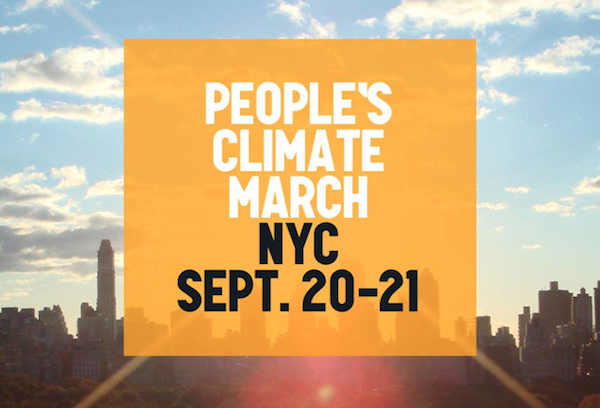 Zero has become the most important number for humanity. Why?

Top military experts and government institutions like the U.S. Department of Defense and National Intelligence Council warn that climate destabilization threatens our national security, yet global emissions just keep going up. Leading biologists like E.O. Wilson warn that the sixth great extinction is now upon us, yet emissions keep going up.

By heating the globe at such a relentless rate, we are playing a deadly game of planetary Russian roulette. In the words of Michael Mann, professor of meteorology at Penn State University: “There is no precedent for what we are doing to the atmosphere. It is an uncontrolled experiment.” If you believe your own eyes that climate chaos has already gone too far, the only logical response is to stop making things worse.

We are not suggesting ending the use of fossil fuels tomorrow. Decarbonizing our industries, homes, transportation, power generation and food production will take years of concerted effort and require every ounce of courage, ingenuity, patience and humility we possess. But intergenerational justice demands that we commit ourselves now as a nation to leading this green industrial revolution.

Some will no doubt call this goal unrealistic, saying it cannot be achieved, but they would underestimate the creative genius of the American people. What is unrealistic is thinking we can continue with business as usual and leave a habitable planet for our children. Americans are a supremely resourceful people with a long history of meeting, and exceeding, monumental challenges. While we have never faced anything as daunting as the global climate crisis, there are precedents for the U.S. overcoming seemingly insurmountable odds.

When destiny came knocking during World War II, we initially resisted, then answered by leading the allied forces to victory in three and a half short years.

It took a Civil War to end the scourge of slavery, and a monumental civil rights struggle to outlaw segregation, Jim Crow laws and discrimination, but we not only overcame, we elected a person of color as President of the United States.

When President John Kennedy boldly challenged America to land a man on the moon in less than a decade, our best and brightest responded by accomplishing this seemingly impossible task ahead of schedule.

It is now time for our generation to do something great.

Again, even the conservative, consensus-based IPCC supports near zero emissions or below, albeit on a year 2100 timeline that belies the urgency of their August draft report, which warns of “irreversible impacts” from continued emissions.

Major corporations, like Google, have embraced a zero carbon goal. Others like Microsoft and Deutsche Bank are moving in this direction by committing to net zero emissions, or carbon neutrality (using carbon offsets or carbon credits to balance out remaining emissions). 684 college and university presidents (and growing) have taken a similar climate neutrality pledge. And a fossil fuel divestment movement is picking up steam on college campuses (including Stanford University, Sydney University and historically black colleges and universities) and in houses of worship around the world.

Sweden, Iceland, Costa Rica and the Maldives are among the nations vying for carbon neutrality. Denmark is committed to becoming fossil fuel free, with Copenhagen seeking to become the world’s first carbon-neutral capital by 2025. In the U.S., cities like Austin and Boulder are striving for carbon neutrality, with San Francisco pledging to generate all of its electricity from renewables by 2020.

In stark contrast, neither the U.S. President, nor a single member of the U.S. Congress, has yet publicly called for a zero emissions goal for America.

Just because the governments of the world accept 2° Celsius of heating above the preindustrial average as the agreed-upon target does not make it the right target. To the contrary, last December, preeminent climate scientist James Hansen and seventeen co-authors released a study in the scientific journal PLOS ONE revealing the UN-approved 2°C ceiling is based on politics, not science, and would unleash “disastrous consequences” beyond our control.

Dr. Hansen, economist Jeffrey Sachs, and others argue that “morality” demands a rapid and dramatic cut in global carbon emissions to stay as close as possible to a 1°C ceiling (we are already at 0.85°C). Here’s what they said about the urgency of dropping from the current level of 400 parts per million (a level not reached in at least 800,000 years) of carbon dioxide (CO2) in the atmosphere to 350 parts per million (ppm), the level many consider the uppermost safe limit for civilization:

“It is instructive to see how fast atmospheric CO2 declines if fossil fuel emissions are instantly terminated. Halting emissions in 2015 causes CO2 to decline to 350 ppm at century’s end. A 20 year delay in halting emissions has CO2 returning to 350 ppm at about 2300. With a 40 year delay, CO2 does not return to 350 ppm until after 3000. These results show how difficult it is to get back to 350 ppm if emissions continue to grow for even a few decades.”

We’re obviously not going to achieve zero emissions by 2015. The point is we need to do it as soon as necessary to avoid catastrophe impacts from global climate change. Every day we delay buries us deeper in the climate hole.

The United Nations, Congress and the White House are all failing in their moral obligation to stem the tide of this gathering storm.

The United Nations is not leading on this issue, as it must. Since 1990, when the IPCC issued its first report, CO2 emissions have increased by approximately sixty percent. Last year in Warsaw, after 19 successive sessions of the UN Conference of the Parties (COP) failed to achieve meaningful emissions reductions, labor and environmental groups walked out after deciding governments were performing so poorly they could no longer legitimize the climate cop-out with their presence.

Congress is not leading on this issue, as it must. Since refusing to ratify the 1997 Kyoto protocol, the U.S. Congress has failed to enact any significant climate legislation. The closest they came was a Wall Street-friendly “cap and trade” bill passed by the Democratic-controlled House of Representatives in 2009. Described as an “unacceptable compromise” by Greenpeace and “a step backwards” by Friends of the Earth, it called for a modest 17 percent reduction of carbon emissions by 2020. Five years later, too few members of the Republican-controlled House of Representatives are even willing to admit humans are changing the climate.

The White House is not leading on this issue, as it must. The EPA’s proposed rules to limit carbon pollution from existing coal-fired power plants are a step in the right direction, but President Obama’s widely heralded “climate action plan” will be more PR than plan, with no chance of stabilizing the climate, unless the White House takes bold action. In fact, the administration’s attempt to please all during this climate crisis with its all-of-the-above energy strategy promises more climate chaos by promoting natural gas fracking; mountaintop removal mining; deepwater and Arctic oil drilling; tar sands mining; and deafening seismic oil and gas exploration off the Atlantic coast. That the President has not yet denounced a scheme as “absurdly reckless” as Keystone XL’s northern leg speaks volumes.

Even the renewable energy industry is not leading on this issue, as it must. Four years after it was first pointed out, America’s largest wind, solar and geothermal trade associations continue to embrace incrementalism, when the times call for revolutionary change.

Because the climate crisis threatens all life on Earth, it is first and foremost a moral issue. We have already seen how the poor and communities of color bear the brutal brunt of fossil fuel extraction and suffer the most from extreme weather disasters. Three out of four African Americans live within 30 miles of a coal-fired power plant. African-American children have an 80 percent higher rate of asthma, and are nearly three times more likely to die from asthma, than their white peers. The moral urgency of this crisis requires a rainbow coalition of people – reflecting the diversity of our great nation – coming together to solve it.

Alarmingly, latest projections by the U.S. Energy Information Administration have fossil fuels supplying almost 80 percent of the world’s energy use through 2040, with carbon dioxide emissions rising 46 percent from 2010 levels. If this perilous trend is not reversed, runaway climate change could cause most of life on Earth to go extinct, testing the survival of humanity itself.

As the nation that historically contributed the most to global climate pollution, and is in the strongest position to respond, the U.S. has a moral imperative to lead this global charge.

It is time for America to unleash its entrepreneurial can-do spirit through a wartime-like mobilization to help save America, and the world. Innovating to zero emissions will not only help ensure our collective survival, it is the key to revitalizing our ailing economy and putting America back to work. But we don’t have until 2100, or even 2050, to transition off of fossil fuels. Scientists are calling for deep cuts in emissions now. Leaders showing us how to get there include:

On, Sept. 23, a UN Climate Summit is being held in New York City. UN Secretary-General Ban Ki-moon has challenged world leaders to bring their pledges to set the world on a low-carbon path. We entreat Mr. Ban, who calls zero emissions an “achievable goal,” to challenge attendees of the UN Climate Summit to bring their zero emissions plans to COP20 in Peru this December and to COP21 in France in 2015. Anything less will show our governments are not serious about solving this existential threat.

Our colleague Bill McKibben, who earlier this year called out the Obama administration for sabotaging the 2009 Copenhagen climate negotiations through NSA spying, has issued a “call to arms” inviting all who “give a damn about the biggest crisis our civilization has ever faced” to gather in New York City on Sept. 21 for a People’s Climate March to demand bold climate action at the UN Summit. We ask, what could be bolder than zero emissions?

Earth is the only known habitable planet in the universe, making the climate risks to humanity so great as to warrant the utmost precaution. Now is the time for the climate justice movement to rally around a goal of zero emissions, with the U.S. leading the way by enacting zero emissions policies at the local, state and federal levels. For the love of humanity, and our children, we must act now.