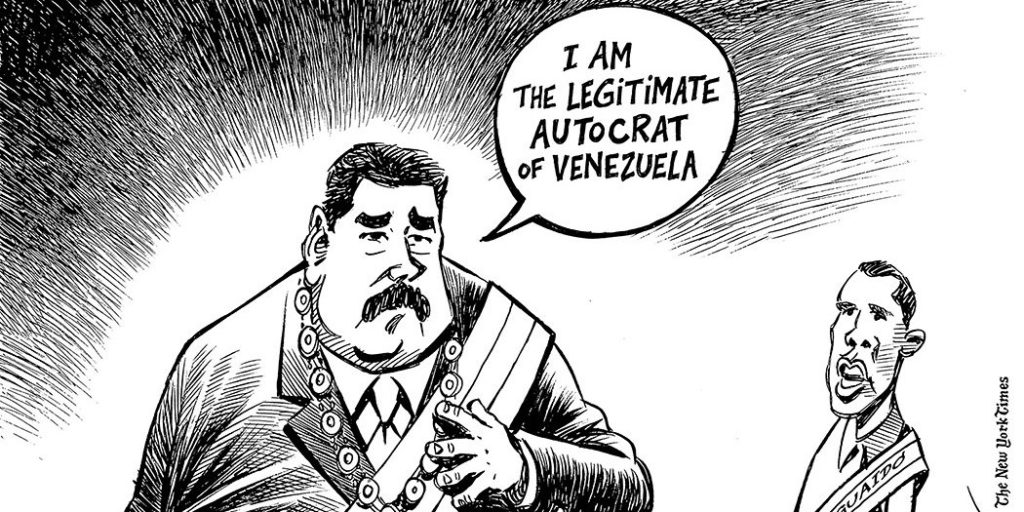 A FAIR survey of US opinion journalism on Venezuela found no voices in elite corporate media that opposed regime change in that country. Over a three-month period (1/15/19–4/15/19), zero opinion pieces in the New York Times and Washington Post took an anti–regime change or pro-Maduro/Chavista position. Not a single commentator on the big three Sunday morning talkshows or PBS NewsHour came out against President Nicolás Maduro stepping down from the Venezuelan government.

Of the 76 total articles, opinion videos or TV commentator segments that centered on or gave more than passing attention to Venezuela, 54 (72 percent) expressed explicit support for the Maduro administration’s ouster. Eleven (14 percent) were ambiguous, but were only classified as such for lack of explicit language. Reading between the lines, most of these were clearly also pro–regime change. Another 11 (14 percent) took no position, but many similarly offered ideological ammo for those in support.

(The Times and Post pieces were found through a Nexis search for “Venezuela” between 1/15/19–4/15/19 using each paper as a source, narrowed to opinion articles and editorials. The search was supplemented with an examination of each outlet’s opinion/blog pages. The TV commentary segments were found through Nexis searches for “Venezuela” and the name of the talkshow during the same time period, in the folders of the corresponding television network: NBC News/CBS News transcripts, ABC News transcripts, and PBS NewsHour. Non-opinion TV news segments were omitted. The full list of items included can be found here.)

This comes despite the existence of millions of Venezuelans who support Maduro—who was democratically elected twice by the same electoral system that won Juan Guaidó his seat in the National Assembly—and oppose US/foreign intervention. FAIR (2/20/19) has pointed out corporate media’s willful erasure of vast improvements to Venezuelan life under Chavismo, particularly for the oppressed poor, black, indigenous and mestizo populations. FAIR has also noted the lack of discussion of US-imposed sanctions, which have killed at least 40,000 Venezuelans between 2017–18 alone, and continue to devastate the Venezuelan economy.

The Times made its official editorial opinion on the matter crystal clear at the outset of the attempted coup (1/24/19): “The Trump administration is right to support Mr. Guaidó.” Followed by FAIR’s favorite Times columnist, Bret Stephens (1/25/19):

It’s generally a nation’s supreme court that has the final say on who is constitutionally legitimate, but in this case they can apparently be overruled by a foreign government—or a foreign newspaper columnist.

The [Trump] administration’s best approach would be to join with its allies in initiatives that would help Venezuelans while bolstering Mr. Guaidó.

The Times even produced an opinion video (4/1/19) with Joanna Hausmann, “a Venezuelan American writer and comedian,” as she is described in her Times bio. Between sarcastic stabs at Venezuela’s “tyrannical dictator” and cute animations of “Ruth Bader Ginsburg in workout clothes”—Hausmann’s self-described “spirit animal”—come more serious declarations about the nation’s political situation:

Juan Guiadó is not an American right-wing puppet leading an illegitimate coup, but a social democrat appointed by the National Assembly, the only remaining democratically elected institution left in Venezuela…. Let’s provide humanitarian aid and support efforts to restore democracy.

It would be ludicrous to think the Times would withhold as blatant a connection to Maduro if one of his aides’ daughters made a snarky opinion video calling Juan Guaidó a would-be “brutal dictator”—even if our theoretical commentator was “an independent adult woman who has built a popular following on her own,” as Times opinion video producer Adam Ellick said in defense of the omission. Such a crucial relationship to a powerful Chavista politician would never go undisclosed—in the unlikely event that such a perspective would be tolerated in the opinion pages of an establishment paper.

These are just a few of many media pundits’ endorsements of Guaidó—someone whose name most of the Venezuelan population did not even recognize before he declared himself interim president. Put more accurately, they are endorsements of a US-backed coup attempt.

One of the more muddled regime change endorsements came from Rep. Ro Khanna’s Post op-ed (1/30/19), in which he says no! to military intervention, no! to sanctions, yet yes! to… “diplomatic efforts”:

The United States should lend its support to diplomatic efforts to find some form of power-sharing agreement between opposition parties, and only until fair elections can take place, so that there is an orderly transition of power.

“Diplomatic” is a reassuring term, until you realize that US diplomacy, as FAIR’s Janine Jackson explained on Citations Needed podcast (3/20/19), is “diplomacy where we try to get other countries to do what we want them to do”—in this case, effecting a “transition of power” in another country’s government.

Francisco Rodríguez and Jeffrey D. Sachs (New York Times, 2/2/19) envision similar efforts for a “peaceful and negotiated transition of power,” and Khanna made sure to characterize Maduro as “an authoritarian leader who has presided over unfair elections, failed economic policies, extrajudicial killings by police, food shortages and cronyism with military leaders.”

In other words, Maduro the Dictator must be overthrown—but don’t worry, the US would be diplomatic about it.

Those that didn’t take explicit positions nonetheless wrote articles blaming all or most of Venezuela’s woes on Maduro and Chávez. Economics wiz Paul Krugman (New York Times, 1/29/19) gave his spiel:

Hugo Chávez got into power because of rage against the nation’s elite, but used the power badly. He seized the oil sector, which you only do if you can run it honestly and efficiently; instead, he turned it over to corrupt cronies, who degraded its performance. Then, when oil prices fell, his successor tried to cover the income gap by printing money. Hence the crisis.

Note that Krugman failed to mention the 57 percent reduction in extreme poverty that followed Chávez’s replacement of management of the state-owned oil industry (which has been nationalized since 1976, long before Chavismo). Nor does he acknowledge the impact of US sanctions, or any other sort of US culpability for Venezuela’s economic crisis.

Caroline Kennedy and Sarah K. Smith (Washington Post, 2/5/19) did not explicitly blame Maduro and Chávez for Venezuela’s “spiral downward,” but similarly ignored evidenced US involvement in that spiral. There are only so many places where you can point fingers without naming names.

Dictatorship-talk—writers lamenting the horrific and helpless situation under an alleged “dictator”—characterized many of the ambiguous and no-position articles. In the Post (1/24/19), Megan McArdle asked:

You have to look at Venezuela today and wonder: Is this what we’re seeing, the abrupt end of Venezuela’s years-long economic nightmare? Has President Nicolás Maduro’s ever-more-autocratic and incompetent regime finally completed its long pilgrimage toward disaster?

The Sunday talkshows and NewsHour also couldn’t find a single person to challenge the anti-Maduro narrative. They did find room, however, for three of the most passionate advocates of regime change in Venezuela: Sen. Marco Rubio (Meet the Press, 1/27/19), Donald Trump (Face the Nation, 2/3/19) and Guaidó himself (NewsHour, 2/18/19).

But leave it to Nick Schifrin of the NewsHour (1/30/19) to bring on “two views” of the US intervention question that are both pro-regime change and pro-US intervention. View No. 1 came from Isaias Medina, a former Venezuelan diplomat who resigned from his post in protest against Maduro. Medina made the unlikely claim that 94 percent of the Venezuelan population—or 129 percent of the population over the age of 14—support US intervention to overthrow the Maduro government:

Not only I, but 30 million people, support not only the US circumstance, but also the Latin American initiative to restore the rule of law, democracy and freedom in Venezuela.

View No. 2, the ostensibly anti-regime change take, came from Benjamin Gedan, who served on the Obama administration’s National Security Council as director for Venezuela and the Southern Cone. When asked if he supported Trump’s moves to sanction Maduro and possibly use US troops to oust him, Gedan responded:

I think both of those steps are problematic. I think the sense of urgency that the United States administration has shown is absolutely correct…. The question is, how can we assist the Venezuelan people [to] promote a peaceful transition in Venezuela, without harming the people themselves, or fracturing the coalition that we have built over two administrations?

In other words, how can we overthrow the Venezuelan government without destroying the country—or “fracturing the coalition we have built”? The US has many options on the table, but none of them involve not pursuing the overthrow of Maduro.

In the “no position” camp for TV news, New York Times chief Washington correspondent David Sanger (Face the Nation, 1/27/19) noted that the problem with US support for Guaidó is one of  “both history and inconsistency”:

Our history in Latin America of intervening is a pretty ugly one, and the inconsistency of not applying the same standards to places like Saudi Arabia and Egypt, where the president has embraced strong men, I think may come back to make the United States look pretty hypocritical, not for the first time.

Sanger indulged in the popular “hypocrisy takedown”: The problem, as presented, isn’t that the US disrupts democracies, destroys economies and kills people, but rather that it does so inconsistently. While vaguely acknowledging the US’s horrific track record of Latin American interventions, and Trump’s cherry-picking of governments worthy of regime change, Sanger didn’t take the logical next step of calling for the US to keep its hands off Venezuela. Instead, he called Maduro’s supporters—defined as “China, Russia and Cuba”—“not a great collection,” and failed to push back against the claim that Maduro “fixed the last” election. Without a formal declaration, Sanger did all the ideological preparation for foreign-backed regime change.

That elite media didn’t find a single person to vouch for Maduro or Chavismo, and that almost all the opinions explicitly or implicitly expressed support for the ouster of Venezuela’s elected president, demonstrates a firm editorial line, eerily obedient to the US government’s regime change policy.

This isn’t the first time that FAIR (e.g., 3/18/03, 4/18/18) has found a one-sided debate in corporate media on US intervention. When it comes to advocating the overthrow of the US government’s foreign undesirables, you can always count on opinion pages to represent all sides of why it’s a good thing. And the millions of people who beg to differ? Well, they’re just out of the question.