President Trump’s “zero-tolerance” immigration policy under the direction of Attorney General Jeff Sessions is big business for U.S. companies — from private prison and tech firms to defense and security contractors — as well as nonprofits.

Under bipartisan pressure, Trump signed an executive order Wednesday ending the administration’s controversial child-separation policy. But Trump’s “zero-tolerance” policy, in which individuals who enter the U.S. illegally are prosecuted, will continue.

All this comes as the country grapples with harrowing images of babies stripped from their mothers’ arms and children playing soccer on the grounds of abandoned Walmart stores along the Southwest border.

Trump defended his policy in a campaign speech Wednesday in Minnesota. That came a day after the raid of an Ohio meat plant in which Immigration and Customs Enforcement (ICE) agents arrested 146 employees accused of being in the country illegally. It was the largest workforce raid in recent history, according to the agency.

ICE, which enforces the administration’s immigration policy, has allocated billions in federal contracts to private companies for software, consulting and manpower. Overall, the federal government has spent $4 billion since October 2016 — the start of 2017 fiscal year — on contracts and grants to counter illegal immigration.

OpenSecrets analyzed the money going to these often high-profile, publicly traded companies as well as their political spending and lobbying, along with the nonprofits commissioned to care for minors.

Trump’s hardline approach to illegal immigration is a boon for private prisons and security companies.

In 2016, the Department of Justice under the Obama administration began phasing out for-profit prisons for federal inmates following a DOJ report that found poor management practices at one private facility contributed to an inmate riot that killed a prison guard in 2012.

The Trump administration, however, has embraced them — particularly as a solution for the high cost of detaining people who crossed the border illegally.

The 2012 inmate riot occurred inside a prison owned and operated by CoreCivic, formerly Corrections Corporation of America. Since 2017, CoreCivic has received $225 million in ICE funding to manage immigrant detention facilities, according to USASpending.gov data.

A subsidiary of the Tennessee-based company donated $250,000 toward Trump’s inaugural festivities last year.

Another $250,000 Trump inaugural donor — GEO Group — is the country’s largest for-profit prison operator and a multimillion-dollar beneficiary of the administration’s aggressive immigration policy.

The Florida-based company and its subsidiaries, which also gave $225,000 to a pro-Trump super PAC during the 2016 presidential election, have been paid $560 million over the last two fiscal years for contracts they hold with ICE.

GEO Group and its subsidiaries oversee a number of ICE detention facilities and have aggressively lobbied to secure contracts and influence the nation’s immigration policy. In 2017, the company spent $1.7 million on lobbying, the highest amount on record for a private prison contractor.

Aside from lobbying, the company has a prolific political action committee and a number of big-donor employees. So far in 2018, the company’s PAC and employees have contributed $727,000 to candidates — a total that is on track to continue the upward contribution trend.

While GEO certainly profits off keeping immigrants detained, they also make money once they’re released. A large share of ICE’s payments to GEO last year went to BI Inc., a subsidiary that provides ankle bracelets and monitoring services to track those awaiting trial for immigration violations.

BI first received an ICE contract in 2008 and was paid $10 million that year. Payments have grown steadily since then, topping out at $115 million in the 2017 fiscal year. 2018 totals are on track to surpass that.

MVM Inc., a Virginia-based private security contractor, has earned $115 million since 2017 through immigration-related ICE contracts. The company provided “security guards and patrol services” for $53.7 million, according to the contract description.

In 2017, the company was sued for workplace discrimination and had a lucrative CIA contract canceled for failing to provide enough security guards.

The company does not appear in lobbying disclosures. Company founder Dario Marquez Jr. is an active political donor, however. Since 1990, Marquez has given $212,321, including donations to Virginia Democrats Tim Kaine ($51,340) and Gerry Connolly ($29,100).

ICE also contracts with technology and software companies, including Silicon Valley firms and defense contractors, for tools to help track, arrest and monitor those suspected of violating immigration laws.

Palantir Technologies, a data analytics firm, has never reported a profit since its founding in 2003. The company has come to rely on lucrative, long-lasting contracts with government agencies, including ICE, seeking to make use of its tools.

Since 2014, Palantir has received just under $100 million in ICE funding for both case management software and a customized data analytics tool called FALCON-SA, which helps ICE track and arrest individuals suspected of being in the country illegally.

Palantir’s largest contract — $53 million to provide software services — was awarded in 2014 during the height of the Central American refugee crisis and is ongoing through 2019. The company’s most recent ICE contract was $250,000 for the purchase of another software program called Gotham.

The bulk of Palantir’s political spending can be attributed to Peter Thiel, the group’s founder, who contributed about $1.3 million in 2016 to groups supporting Trump’s election and $100,000 to the president’s inauguration.

Thiel’s support for the president during the campaign ultimately landed him a spot on Trump’s transition team.

Palantir is also heavily invested in the D.C. influence culture through its lobbying activities, which peaked last year at $1.4 million. The majority of the money was directed toward securing government contracts. Thiel and Palantir’s lobbying appears to have paid dividends beyond the contracts awarded by ICE.

The company also won an $876 million defense contract this year.

Microsoft, another tech giant fulfilling contracts for ICE, has recently encountered backlash from employees over its relationship with the controversial agency. In an open letter first published by The New York Times, more than 100 employees argued that the contracting work was a “clear abdication of ethical responsibilities.”

Other major ICE contractors include big names in defense contracting.

Booz Allen Hamilton has been a perennial ICE contractor, having received contracts to support the Law Enforcement Systems and Analysis division, which is the main data analysis office ensuring the agency’s detainee processing and enforcement systems are working efficiently. 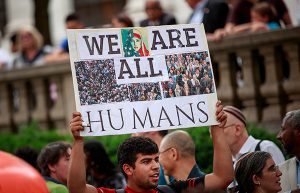 In June 2017, Booz Allen announced it was under federal investigation related to how it billed the government for its services. The contractor and its subsidiaries received $63 million in federal funding from ICE over the last two fiscal years.

Other major defense contractors receiving ICE contracts include CSRA LLC and Northrop Grumman who were paid $34 million and $397,000 respectively in the last two years.

Federal data suggest migrant children have been sent to nonprofit residential centers stretching from Seattle to New York and Chicago to Miami.

Since 2017, the Department of Health and Human Services (HHS) has paid out $1.2 billion to nonprofit organizations that care for minors. None have benefited more from Trump’s now-rescinded child-separation policy than Southwest Key Programs, Inc.

The Austin, Texas-based nonprofit was paid $596 million in the last two fiscal years to house immigrant children, including those seized from parents at the border.

The facilities operated by Southwest include Casa Padre, a federal detention center in Brownsville, Texas, housing over 1,400 children — some of whom were among those separated from parents, according to media reports. The facility is a converted Walmart.

The contracts were awarded through HHS’ Office of Refugee Resettlement, which is responsible for custody of the children.

The more than half a billion in grant funding comes one year after Southwest Key laid off nearly 1,000 workers due to a drop in illegal border crossings.

The nonprofit employed over 4,500 workers and reported revenue of about $243 million in its 2016 Fiscal Year, according to its most recent tax returns.

Of the $243 million, roughly 66 percent — or $159 million — went toward salaries, including $3.1 million to nine executives in base salaries and bonuses. The nonprofit was almost entirely tax-funded, with $240 million coming from government grants, according to the filing.

BCFS Health and Human Services, a multinational network of nonprofits based in San Antonio, has received $121 million this year in HHS grants to shelter unaccompanied children. The grants and services include:

The nonprofit conglomerate also received a $10 million grant for 1,152 “home study cases” and 4,000 “post release cases,” according to the HHS descriptions.

Other nonprofits with 2018 grant funding to care for unaccompanied minors include:

It’s unclear if and when the thousands of displaced children will be reunited with parents.