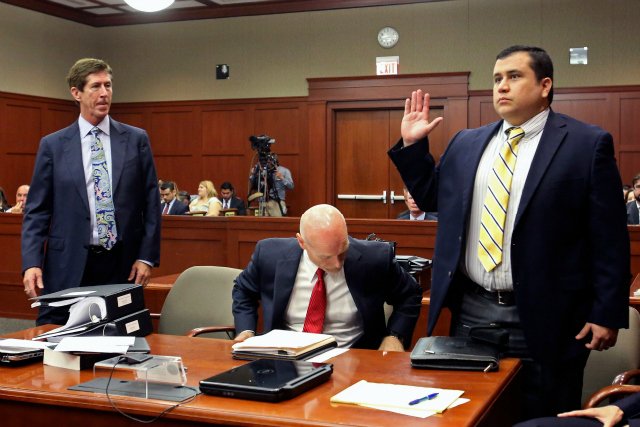 Zimmerman Case: When the Prosecution is the Defense

Watching part’s of the Zimmerman trial has reminded me of all that’s wrong with the American jurisprudence system. In my best legal argument – the prosecution eats ass (sorry if there is a organized group of salad tossers who are offended by the comparison to the prosecution). Let’s start with the picking of a jury that includes no Black woman. Any trial attorney who has studied the science of jury selection knows that – in a matter involving a Black male victim or if the defendant is a young Black male – Black women are more open to listening to the nuances of the case.  The most obvious reason is that Black women have birthed many a Black son. Black women like Trayvon’s mother are familiar with what racial profiling is from their own lived experiences and from the lives they share with fathers, sons, uncles and cousins who also have to survive being targeted on a daily basis.  This strategy is almost sacrosanct for prosectors who want to win some justice in these type of cases. To somehow allow the selection of five white woman (on a six-member jury) shows that the prosecutor is either inept or has potentially decided to throw the case.

Further, the prosecution has not presented a succinct theory of the case. In essence this case is about a wanna-be Barney Fife who was rejected from being a cop and who had his “thug-o-meter” go off because he sees a “threat” from every young Black man.  Zimmerman followed Trayvon Martin, left vehicle and instigated a confrontation (reflected by 911 operator saying that they don’t need him to continue following). At some point, he may have been losing the fight and then shot young Martin.

Instead of presenting a case that can be easily understood, we get an overabundance of witnesses that step over each other and who did not need to be called to the stand at all. The prosecution needed only one police investigator to lay out the background, the 911 operator that Zimmerman spoke to, one expert who could document why neighborhood watch-cops should not confront people they deem suspicious and a forensic expert. In the closing argument, he should  present a crisp clarification on how the “stand your ground” law works: you can’t start a fight and then claim self-defense when you get the worse of it.

The star witness should have been Trayvon’s young friend, Rachel Jeantel, who  was on the phone with him during his walk home when he noticed he was being followed. Her dramatic testimony – along with Martin’s mother’s – should have sealed the conviction. Ms. Jeantel was of course nervous when testifying because – really – who isn’t when being asked questions in a trial that is a media onslaught and then having to face a harsh cross-examination? It would be interesting to know how many hours were spent preparing the witness, making sure that she understood what was going to happen and how to respond. However unflatteringly she was portrayed by stupid and racist pundits, there was an element of a witness who was not sure how to respond when attacked. The prosecution (who also has a “creepy ass cracka” look) seems to have not spent an adequate amount of time making sure the witness was ready for what he knew would happen during the cross-examination. Although she held up well, she may not have been properly prepared for the art of theater in the court room.

As we know, the state policing system never wanted to press charges in this case. Out of impulse, they immediately sympathized with anyone who claims self-defense after shooting a young black man. The idea that our youth are captured animals who can turn dangerous at any time when they are not under supervision has almost become an instinct to the larger white society. This prosecution is similar to those that we have seen many times when actual police offers are tried against the will of the prosecutor and the verdicts are almost always a foregone conclusion.

If the verdict in this case turns out to be what many are beginning to suspect – that Zimmerman will be found “not guilty ” – the passion and resistance by the family and the grassroots community that demanded charges were filed against Zimmerman won’t be forgotten. If the verdict is not guilty, many will take to the streets again to make sure that others understand that there is a price to pay for taking the lives of young Black men and that – when a so-called criminal justice system continues to fail in providing even a small level of justice – the community will act. And we will find more than just Zimmerman guilty.

Kamau Franklin has worked as a community activist and attorney for over fifteen years in New York City and now in the south. He has been a leading member of several grassroots organizations dedicated to human rights advocacy and building grassroots institutions in the black community. Currently he is building a new organization named Amandla Training and Organizing Project.