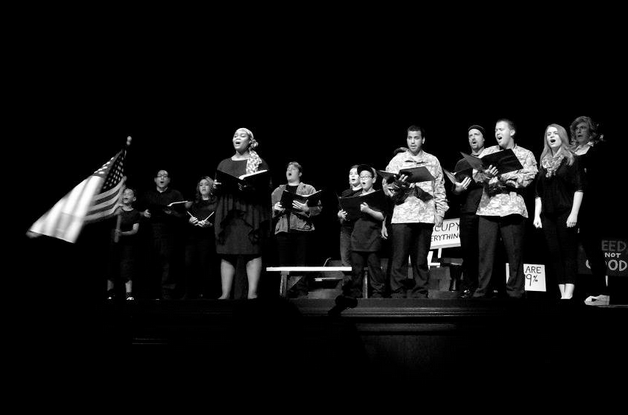 It’s not easy writing a play about injustice in America today – much as it’s not easy telling the complex, multi-layered story of the Occupy movement. But that’s what writer Catherine Hurd set out to do with her new musical “Zuccotti Park,” which premieres in New York City on Thursday, Feb. 26, at the Venus Adonis New York Theater Festival.

For starters, when tackling something as sprawling as Occupy, what issues get addressed first?

“One was obviously the mortgage crisis, where people were pushed into these shady purchase agreements by [companies like] Countrywide, when they didn’t have the money to buy a house in the first place – some who didn’t even have $1,000 in savings,” says Hurd, speaking last week from her home near Davis, Calif.

But that was just one problem among many. “Then there was losing medical insurance when you have a sickness. In the musical, there’s a homeless veteran with post-traumatic stress who got into drinking and drugs and ended up losing everything,” she says. “There’s a guy who worked at a factory for 20 years and then lost his job and had nowhere else to go. There’s also student debt – the main character, Kate, can’t find a job after having $60,000 in student loans. All of those characters come together in Zuccotti Park.”

Produced and directed by Luis Salgado, and featuring music composed by Vatrena King, “Zuccotti Park” runs through the weekend at the Robert Moss Theater, with two shows on Feb. 28 and a final performance on Sunday, March 1. Tickets are $20 and can be purchased here.

How we got here

“I was very naive,” she recalls, “then I started seeing things like Enron and I said, “That can’t happen. How can they try and screw the whole state [of California], who do they think they are?’ Then there was the war in Iraq, when you couldn’t even wear a peace sign on your shirt without getting hazed by people about it. The whole thing after 9/11 and the Patriot Act coming up so quickly—I just said, ‘I’m going to read every book I can on the economy.'”

Hurd read so much, in fact, that she was able to connect the dots in ways that mainstream financial analysts were not, enabling her to foresee the housing crash before it happened – and to get out while she was ahead.

“It took my husband six years to build a house on a little piece of property, and I knew we had to sell it. I was reading about how they were bundling all these sub-primes together and selling them,” Hurd says. “I was in L.A. and the houses were just outrageous; every week the prices were raised. It looked like a classic bubble. I said, ‘All of this is crazy, all these bonds backed by this fraudulent stuff is going to bust,’ and we sold it right before. You weren’t seeing it anywhere on the news then except in the extremes, the libertarians. The mainstream said, ‘This is great, the party will go on forever.’

“Then the banks got bailed out,” she says, “and when Occupy started, I saw that I wasn’t the only one who had a problem with this.”

Hurd, who earned her MFA in screenwriting in 1998 from UCLA, had written mostly comedy scripts, so “this was really off in a different direction for me. Not only is it a play, which I hadn’t really written before, but it was on a serious subject and one which I really strongly believed in.”

In writing “Zuccotti Park,” it wasn’t just difficult for Hurd to choose which issues to focus on – but how to tell an engaging, human story that didn’t get lost in the economic details. “A lot of it at first was too much telling, not enough drama,” she says. The original script clocked in at 2 hours, 6 minutes. After cutting, shortening and combining songs, as well as slashing dialogue, the version that premieres this week is less than 90 minutes long.

In the story, Hurd models her protagonist, Cooper, on a soldier whom she met through Facebook, who was a friend of a friend. The soldier was working at the time for a defense contractor and he spoke “very much in the party line: that liberals are to blame for everything.”

“It was the Fox News belief system,” says Hurd, where “he believes he’s fighting for his country, protecting freedom, that this is the perfect country and everything’s great in the old U.S.A. where everyone’s got a shot at the American Dream – the whole fairy tale.”

In the play, Cooper and a fellow soldier named Washington visit New York while on leave from Afghanistan. Cooper is an Iowa farm boy; Washington is an African-American and New York City native. Cooper arranges to meet up with Kate, his former Iowa neighbor and childhood friend, at Zuccotti Park. But unbeknownst to him, the park has become ground zero for the Occupy movement.

When the two meet, Cooper finds Kate as she is being pepper sprayed for assisting a friend during a police raid. Cooper challenges the police for what he sees as unnecessary force, is handcuffed for his efforts, and ends up in jail with the protesters.

The characters’ contrasting experiences couldn’t be clearer: after 9/11, at the age of 18, Cooper skipped college, joined the military and went to war. Meanwhile, Kate was accepted at NYU, studied psychology, graduated with a mountain of student debt, and couldn’t find a job. Yet despite their radically different worldviews, Cooper finds himself drawn into conversations and hearing other sides to the American story he thought he once understood.

While behind bars, the group sings the words of the First Amendment of the Bill of Rights. And after Cooper, Kate and the other protesters are bailed out of jail, Cooper accepts Kate’s invitation to spend more time with her and her fellow activists. “He is, in essence, the audience that we’re trying to bring along,” says Hurd, who focuses much of her attention on America’s founding documents.

“We’re patriotic about the founding of this country, and we all say that we respect the documents. But what’s going on does not respect those documents and we need to realize that, and read them,” says Hurd. “I don’t think that most Americans know what the Constitution or the Declaration of Independence even say. [But] going back to the original documents is something that even a Tea Party person can agree on. I don’t put anyone down. I don’t put the CEO down. He’s got his point of view.”

Toward the end of “Zuccotti Park” after police raid the camp, tearing it apart and arresting those who remain, Cooper and Kate have a huge fight. She says to him, “Now do you believe me? We were peacefully protesting here!” Cooper still can’t bring himself to fully take the protesters’ side, so Kate asks him if he’s ever read the Constitution. “I fight to defend these documents every day,” he responds. Kate replies: “Do me a favor then, read them,” and she throws the documents at him and leaves. Alone, Cooper picks up the pages and starts reading aloud, “We hold these truths to be self-evident…”

“Cooper is us, so him reading it, and the audience hearing it, is like the same thing. And then they sing the Declaration,” says Hurd. “When you dramatize something, you reach people’s emotions, which is different [than] reaching their logic centers. I thought that dramatizing this might be the best way to reach the most people.”

At the same time, some of the songs for “Zuccotti Park” required vetting by economists for accuracy – such as the song that a banker sings to his son about the history of money and how debt creation works, which he likens to a magic act.

“It was really important to me not to make any mistakes,” says Hurd. “I hope that people start questioning what they’re told every night and not believing so much of what the party line is, and what the media [tells us]. I remember when I was a little kid they’d tell me all the propaganda about the Russians. People believe almost everything they hear on TV.”

Hurd says her goal in the work is to “get people to open their minds just a little bit,” so they see that the “people in these parks were not all hippie crazies, that they understand more than you do, and that’s why they’re there.”

“I think the media was very unfair to Occupy and I know a lot of people have very bad impressions of it,” she adds. “You have the Internet, but you don’t have the mass media behind you which are going to give their own slanted view. For a while, I think that the powers that be were really afraid, and I think they probably used everything they could to crush [the movement]. They used media, they used police, a lot of subterfuge with people posing as Occupy people, and misinformation online – whatever they could do.”

So, will real change in this environment ever be possible? “I think there’s enough good people,” says Hurd. “If you can get enough support, even the smallest little snowball will get big. From what I saw, and what I believe is happening, I did what I could. And I’m still trying.”