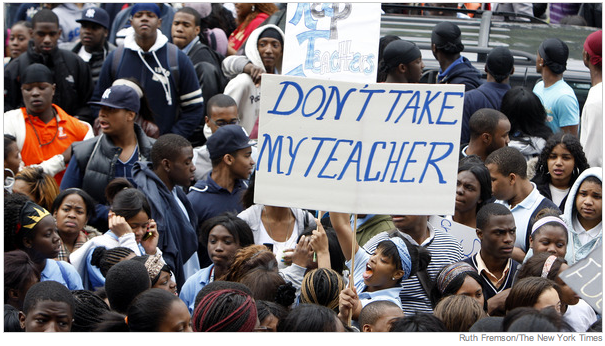 The five Newark school principals and one parent leader punished by state-appointed superintendent Cami Anderson for speaking out against her plan for closing public schools have filed suit against her and the school district in federal court, contending their First Amendment rights were violated and they were subjected to “public ridicule and scorn.”

“By their action in suspending the Plaintiffs from their respective school principal positions with the District, the Defendants have launched a concerted effort to undermine, intimidate and coerce employees of the District, including the Plaintiffs, and members of the public…into agreeing with them on all issues related to any proposed organization plan of the school district,” reads the complaint filed Friday in federal court in Newark.

The complaint also asks the court to lift the ban imposed on Daryn Martin, the president of the Ivy Hill PTO, who has been forbidden to enter the school attended by his two children and all other Newark school facilities. The ban was imposed after he tried to stop central office administrators Tiffany Hardrick and Gary Beidleman from tearing down notices of a PTO meeting at the school.  Brown was suspended for supporting Martin.

The actions of Anderson and the school district, the suit alleges, “were maliciously and intentionally designed to deprive Plaintiffs Martin and Brown of their First and Fourteenth Amendment rights and to expose them to public ridicule and scorn and injure their reputation and character.”

While the lawsuit asks for money damages for the plaintiffs, it also seeks a “declaratory” judgment that Anderson’s actions were unconstitutional because they violated the First and Fourteenth Amendment rights of her critics. It wants the suspensions reversed and their personnel records cleared.

“It’s important to send a message to the state school administration that it cannot suppress the First Amendment rights of their employees if they responsibly raise questions about  matters of great public concern,’’ said Pickett after filing the lawsuit.

“It also is important to send a message to school employees that they should not be afraid to speak out—they have a right to express their opinions about public issues like ‘One Newark.’”

James, Motley, Handfield, and Washington were suspended from their jobs barely 36 hours after they spoke at a community forum at Hopewell Baptist Church called to discuss the implications of the “One Newark” plan that would close, transfer to charters, or otherwise “repurpose” more than a third of the city’s public schools.

The letters they received contended they were under “investigation” for an their involvement in an “incident” that occurred Jan. 15, 2014—which happens to be Rev. Martin Luther King’s Birthday. The only “incident” occurring that day involving the four was the community forum. The incident involving Martin also occurred that day.

Despite the obvious connection to the forum, the district denied the suspensions had anything to do with their criticism of the “One Newark” plan. The district’s spokesman would not specify why the principals were suspended, citing confidentiality of personnel matters.

After a hurried “investigation”—that involved central office administrators talking to small numbers of teachers and parents—all five principals were told Thursday night they had been taken off suspension.  Brown and Washington were reassigned to central office but the three others were returned to their schools.

The five were notified of their reinstatement just hours before Pickett was scheduled to file their lawsuit, leading to speculation that Anderson was trying to end the crisis she caused before the principals could get to court. Pickett said he originally sought to have the court restore the principals’ jobs but had to modify the law suit after they were reinstated.

The rushed nature of the alleged investigation also could account for why, in the midst of a snow emergency, Anderson kept Newark’s public schools open  last Wednesday despite the closing of all other schools in Essex and neighboring counties, including Newark’s charter schools. Central office administrators would not have been able to interview teachers until they were in school.

The principals’ suit calls Anderson’s actions “totally arbitrary and capricious” and the result of “conspiratorial activities of the Defendants who were and are intent on silencing the Plaintiffs, other district employees, parents and students and ordinary citizens and residents of the District, from speaking out on issues of public concern and importance.”

The litigation also notes that the letter suspending the educators  suggested they “had done something wrong based on an unnamed or unidentified ‘incident.’”  Anderson’s behavior, the complaint argued, caused “emotional distress and embarrassment,” entitling the plaintiffs to “compensation.’’

A seventh person caught up in the effort to silence critics of the “One Newark” plan has not yet joined the lawsuit. Jacqueline Bostic, a central office clerk,  was suspended after she allegedly criticized the plan on a cell phone during a bathroom break.