Above Photo: A protester waves an American flag as an activist approaches the police barricade with his hands up on a bridge near Oceti Sakowin Camp on the edge of the Standing Rock Sioux Reservation. Photographer: Jim Watson/AFP via Getty Images

Energy Transfer Partners LP is making a mess of its biggest project since the Dakota Access pipeline.

“We’ve not seen a project in Ohio with spills at this size and scale, and if we can’t even trust Rover to construct this pipeline, how can we trust them to operate it when it’s complete?” said Heather Taylor-Miesle, executive director of the Ohio Environmental Council.

Energy Transfer, the Dallas-based company led by billionaire Kelcy Warren, promised part of the 713-mile (1,147-kilometer) pipeline would open in July, but work is stalled on key segments until the company’s responsibility for the spills can be assessed by the Federal Energy Regulatory Commission, or FERC.

“We are working with FERC and the OEPA to resolve these issues in a manner that is satisfactory to everyone involved, and most importantly ensures the complete remediation of these areas,” said Energy Transfer spokeswoman Alexis Daniel. Recent developments have not affected the project’s timeline, Daniel said.

Any delay would pinch natural gas producers that contracted to ship on the line, which will bring resources from the Marcellus shale to the Midwest. Seven companies have booked 2.9 billion cubic feet a day, enough to power 51,000 homes for an entire winter, once Rover is completed. The company stands to lose more than $10 million a week if it misses the deadline, according to Bloomberg Intelligence analyst Michael Kay.

Gas traders, too, are on alert for work interruptions. When FERC ordered Energy Transfer to halt new construction after the Ohio spills, natural gas futures hit a 14-week high. 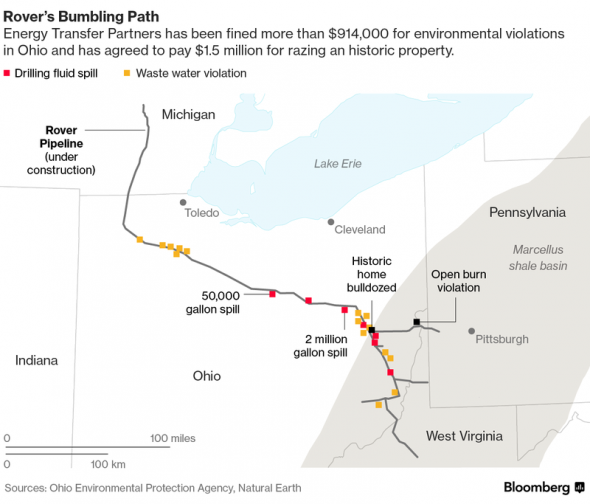 The year began with optimism for Rover. The 2016 election landed friends of Energy Transfer in high places. Former Texas Governor Rick Perry was a company director before he became Energy secretary. President Donald Trump is a former shareholder. After just two weeks in office, Trump cleared the way for the Dakota Access pipeline, which was stalled for months amid protests from Native Americans and their supporters.

In that case, Energy Transfer needed a single approval to complete construction — a federal easement allowing it to drill beneath a lake near the Standing Rock Sioux Reservation.

For Rover, the hold-up stems from mishaps that have prompted federal regulators to look closely at Energy Transfer’s conduct before allowing work to finish.

The first hint of trouble came last year, when Energy Transfer disregarded a FERC recommendation and razed the 173-year-old Stoneman House in Carroll County, Ohio. The agency used the demolition as a basis for denying Rover a blanket construction permit, forcing Energy Transfer to seek federal approvals at virtually every stage of construction.

With that restriction, FERC approved the project in February, and Energy Transfer undertook an aggressive construction push. In a matter of weeks, workers cleared 2,918 acres of trees along 511 miles of the pipeline’s route, finishing just in time to beat bat-roosting season, which would have halted work. The company said it’s hired 13,000 workers over the past four months.

Rover’s construction, through flat, wet farmland, coincided with heavy rains. Crews had to drain excessive water and find a way to dispose of it. Farmers complained that the company was dumping it on their fields, interrupting planting. Between April 5 and May 8, the Ohio EPA cited Energy Transfer at least 16 times for improperly disposing of sediment-laden water in streams.

“While we are working within the parameters of our FERC permit as it relates to storm water, we understand the landowners’ concerns and we are working with them to resolve this issue in a way that is satisfactory to everyone involved,” Energy Transfer’s Daniel said.

Many farmers bristled at Energy Transfer’s attitude, said Matt Strayer, an attorney representing about 200 landowners that have easement agreements with the company. The tight timeline meant that paying for damage was preferable to preventing it, Strayer said.

“They’ll do what they want, and they don’t care who they step on to get there,” said Ben Polasek, an Ohio wheat farmer who owns five parcels on the pipeline’s path. “It’s all about how quickly they can get that pipe in the ground.”

On April 8, workers reported an “inadvertent release” while drilling near Indian Fork River in Eastern Ohio. The fluid used to lubricate the drill, a slurry of nontoxic bentonite clay and water, was disappearing into the borehole. When responders from the Ohio EPA arrived, they found 2,500 square feet of wetlands filled with drilling fluid.

“Whatever lived in the wetland was suffocated beneath a foot or more of bentonite clay mud and subsequently suctioned up by vacuum trucks,” said Ohio EPA spokesman James Lee.

The next spill attracted the unwanted attention of the U.S. regulator. Later in April, work crews noted at least three times that drilling fluid was again disappearing, according to emails between an Energy Transfer employee and the Ohio EPA available on FERC’s website. Each time, workers inspected the site and found no sign that the fluid was escaping to the surface, the emails said. Yet, 119,000 barrels of drilling fluid had disappeared, enough to fill 145 rail cars, in a hole that could only accommodate 7,000 barrels, according to the emails. On April 13, they found about 40 percent of it. It had settled on 500,000 acres of pristine wetland.

“The affected wetland will likely not recover to its previous condition for decades,” Lee said in an interview shortly after the incident. “Had Rover more closely monitored their drilling equipment, and been better prepared for an immediate emergency response, this incident would likely not have occurred on the scale that we’re dealing with.”

“It is our intention to always stay within the bounds of our FERC permit,” said Daniel, the company spokeswoman. “The investigation into this situation is ongoing.”

Between April 8 and May 8, Ohio EPA documented seven spills totaling more than 50,000 barrels, all of them affecting waterways. Many more barrels were never recovered.

The spills prompted Sierra Club and other environmental groups to petition FERC for a wider investigation into Energy Transfer’s conduct.

“The unprecedented number and widespread impact of the company’s environmental violations demonstrate, at best, a complete breakdown in the professionalism of its construction preparations,” the groups said in the June 21 letter.

Energy Transfer’s parent company, Energy Transfer Equity, has one of the highest incident rates for oil pipelines among the top operators, according to a Bloomberg analysis of data from the Pipeline and Hazardous Materials Safety Administration.

Energy Transfer said it was cooperating with regulators. But according to the director of the Ohio EPA, Craig Butler, the company had rebuffed efforts to settle violations and refused to pay $700,000 in civil penalties the agency had levied. The agency has since raised the fines to $914,000.

“They have taken the position that Ohio has no authority to enforce violations,” Butler wrote in a letter to FERC.

Butler asked Acting FERC Chairman Cheryl LaFleur to intervene, and FERC barred Energy Transfer from any new drilling pending an assessment. The agency also started an enforcement probe into the spills, a move that could result in civil penalties, delays or additional investigations by other agencies.

“The presence of diesel fuel in the drilling mud is inconsistent with the commitments made by Rover on which the Commission relied to certificate its project,” LaFleur and Commissioner Colette Honorable said in a June 1 statement.

The FERC announcement is significant because the agency usually keeps investigations private unless or until regulators conclude there was wrongdoing. While it’s unlikely that the agency would revoke Rover’s construction permit, the investigation is a signal that FERC can still slow the project, said Christi Tezak, managing director at ClearView Energy Partners in Washington.

“There are other hoops they may have to jump through before they start service,” Tezak said.