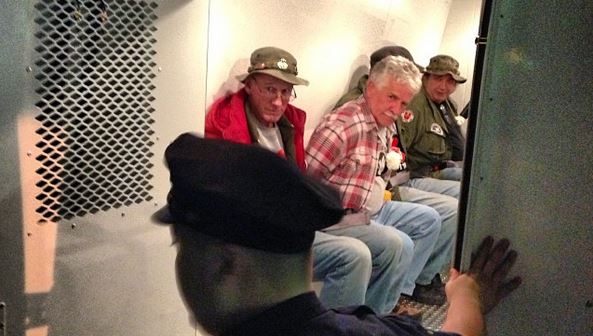 Veterans Arrested At Their Own Memorial Protesting Afghan War

Update and a note: Tarak Kauff, who spent the night in the Tombs as a result of this protest, wrote after he got out that there was “a sense of deep solidarity from many NYPD police officers when we were in jail. They were for the most part appalled, even disgusted that veterans were arrested especially upon hearing that we were protesting at the Memorial to protect the Constitutional rights of all citizens to Freedom of Speech, Assembly and the right to redress grievances; and that we were reading the names of the war dead and laying flowers for them when we were arrested.”

Further he describes how, when five of the vets who were held longer than 19 hours in the Tombs, appeared in court for arraignment “one by one, three officers came over to us and expressed solidarity. One just came up, didn’t say anything but looked in our eyes and shook each of our hands. This was done in front of the judge and a packed courtroom!”

While those five were going through the jail and court process, the rest of the protesters re-gathered at the Vietnam Memorial at 7 AM, they soulfully continued reading the names of the fallen and laid flowers at the wall.  Then, at 9 AM they left and wound their way through Wall Street, a district where many profit from war, to Zuccotti Park.

Updates coming at Stop These Wars

Nineteen military veterans and their allies were arrested Oct. 7 at New York City’s Vietnam Veterans Memorial Plaza for refusing to leave the park at the 10 pm closing time. The date marks 12 years of invasion and occupation of Afghanistan, and the arrestees were reading the names of the dead from the wars in Afghanistan, Iraq, and Vietnam, as well as from the drone wars in Pakistan and other countries. The aims of the action, organized by Veterans For Peace members, were fourfold:

Fourteen of those arrested were released after being given criminal summonses and charged with “remaining in the park after it is closed to public” and “failure to comply with a police order.” The remaining five, including a decorated World War II veteran, had handcuffed themselves together to symbolize their shared humanity and that of all the victims of war, as well as the fact that those killed in war are forever linked by death. They were held overnight and released after arraignment late the following evening. They are charged with resisting arrest, obstructing government administration, disorderly conduct, failure to obey a park sign, trespassing, and failure to obey a lawful order. The first two charges guarantee them the right to a jury trial, rather than a trial before a judge.

Noting that the 500-year-old war against Native Americans was this country’s first and ongoing war, and that the Canadian Idle No More movement had called for actions on this date supporting indigenous sovereignty, Tarak Kauff opened the ceremony at 6 pm by reading names of Native American warriors.

Schall spoke of the devastating experience of seeing the soldiers brought back to the hospitals. She described the continuing effects of Agent Orange, which the United States sprayed as a defoliant in Vietnam and which, 52 years later, continues to cause birth defects among the Vietnamese and among the children of U.S. soldiers who fought there. She noted the hypocrisy of the Obama administration’s condemnation of Syria’s alleged use of chemical weapons. “We have on this plaza the stories of over 1700 New Yorkers who were killed in action from 1961 to 75,” she said, “we are here tonight to say we, veterans and friends and comrades, we hear you. We’re here to continue telling your story and the story of all those who have been sent off to war, and we’re here to listen to the stories of those who have been victims of our government, which sent you overseas to kill and destroy in our name. This is our memorial. We paid for it with our lives and our suffering and we are here to speak out against war.”

Turner spoke movingly of the high rates of suicides among veterans and active-duty members of the military: “Three members of my unit committed suicide in a 30-day period. …  It becomes clear to me that this epidemic  has no discrimination between race, rank, or age. A family friend, Captain Peter Lynnruth, was called the Wizard for his ability to treat PTSD and depression in soldiers, but he was denied treatment by the VA and took his own life this January. All of these men had different rationales for doing what they did, but to say that the military had nothing to do with it would just be wrong.”

The commemoration continued with singing, led by the Raging Grannies, followed by more reading of names and laying flowers in 12 vases, to symbolize the 12 years of war in Afghanistan.

At 10 pm, the police, who had been massing at the edges of the memorial, informed those present that the park was closed and they faced arrest. Nineteen remained in the park, asserting that their First Amendment rights to assembly and speech trumped the city’s need to close the park.

These issues were also raised in the trial in July of 12 of the 25 veterans and allies who had been arrested on Oct. 7, 2012, under similar circumstances. The 12 were found guilty, but the judge then dismissed the charges “in the interests of justice,” indicating that he would not be so lenient should the defendants repeat their offense.

For the veterans, defending First Amendment rights is inextricably intertwined with protesting war. As Vietnam veteran Mike Tork said, explaining why he was taking part in the Oct. 7 action, “Being able to peaceably assemble to petition the government for a redress of grievances is crucial. We may as well draw that line in the sand now, because it will eventually come to that. If we can’t assemble, then we can’t organize. If we can’t organize, we can’t win. We have to help provide the courage so that others will stand up as well.”