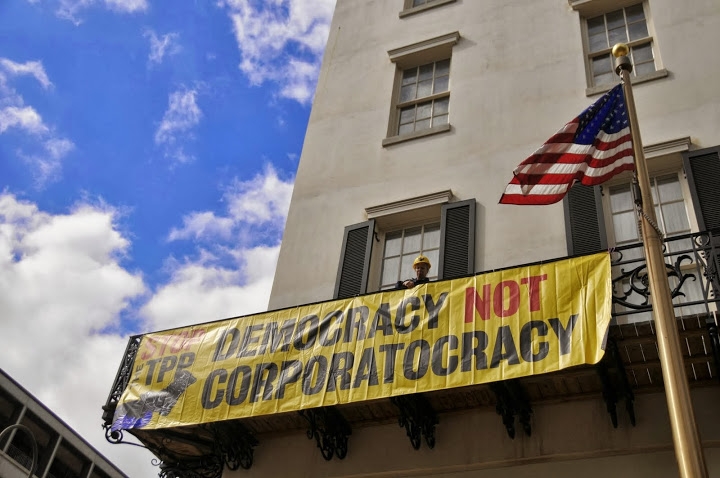 Above: Protester stands on the balcony of the US Trade Representatives Building after putting up banner. Photo by Ellen Davidson.

Here’s how Medea Benjamin of CODE PINK described the breakthrough in the Washington Post: How cool opening the Washington Post today and finding this article and photos! Congratulations!!! In the print version, the two photos are huge, and in the online version, there’s a link to Jeremy’s video, which is amazing. I’ve never seen the Post put a link to an activist video! And check out the quote in bold:  as pure guerrilla theater, the noon-time demonstration could rank among the best. . . ever.

Banner Day for Protesters, Not So Much for Security at US Trade Rep

As pure guerrilla theater, the noontime demonstration could rank among the best . . . ever.

In terms of size, the protest Monday against the Trans-Pacific Partnership (TPP), a huge trade agreement being negotiated at the Office of the U.S. Trade Representative in Washington, was no big deal.

The handful of demonstrators from “Flush the TPP,” an assortment of environmentalists, veterans, Code Pink activists and others chanting in front of the USTR building against the 11-nation treaty, hardly merited media attention. But as pure guerrilla theater, the noontime demonstration could rank among the best ever.

Eight “construction workers” in blue coveralls and odd “Stop the TPP” yellow hard hats somehow made their way up an unsecured scaffolding — the building is undergoing some exterior work — to the top, where they unfurled a 10-by-30-foot banner condemning the proposed treaty as a corporate giveaway.
Then five of the eight “workers” moved onto a lower balcony — we seem to recall it’s on the same floor as U.S. Trade Rep Mike Froman’s office — and hung two more banners.

The police finally showed up and briefly handcuffed one protester. But that was all.

The action had been planned for a month, said Kevin Zeese , an organizer with PopularResistance.org, and the coveralls and hard hats were ordered online. The door to the scaffolding was always open, he noted, and the group did a final scouting mission the Friday before the event.

But when the protesters arrived Monday in their “Stop the TPP” hats, he said, “we were shocked that there were no workers, no security. It was amazing.” “We wanted to do something audacious,” Zeese said. “We wanted to be bold.”

We’re told that for security reasons, the USTR would not answer queries about how the protesters managed to scale the building, but it said the agency has a “security posture” that protects all employees.

Did we mention that the building is just across the street from the White House complex, specifically the Eisenhower Executive Office Building?

Al Kamen, an award-winning columnist on the national staff of The Washington Post, created the “In the Loop” column in 1993. He began his reporting career at the Rocky Mountain News and joined The Post in 1980. He has covered local and federal courts, the Supreme Court and the State Department. Follow him on Twitter.