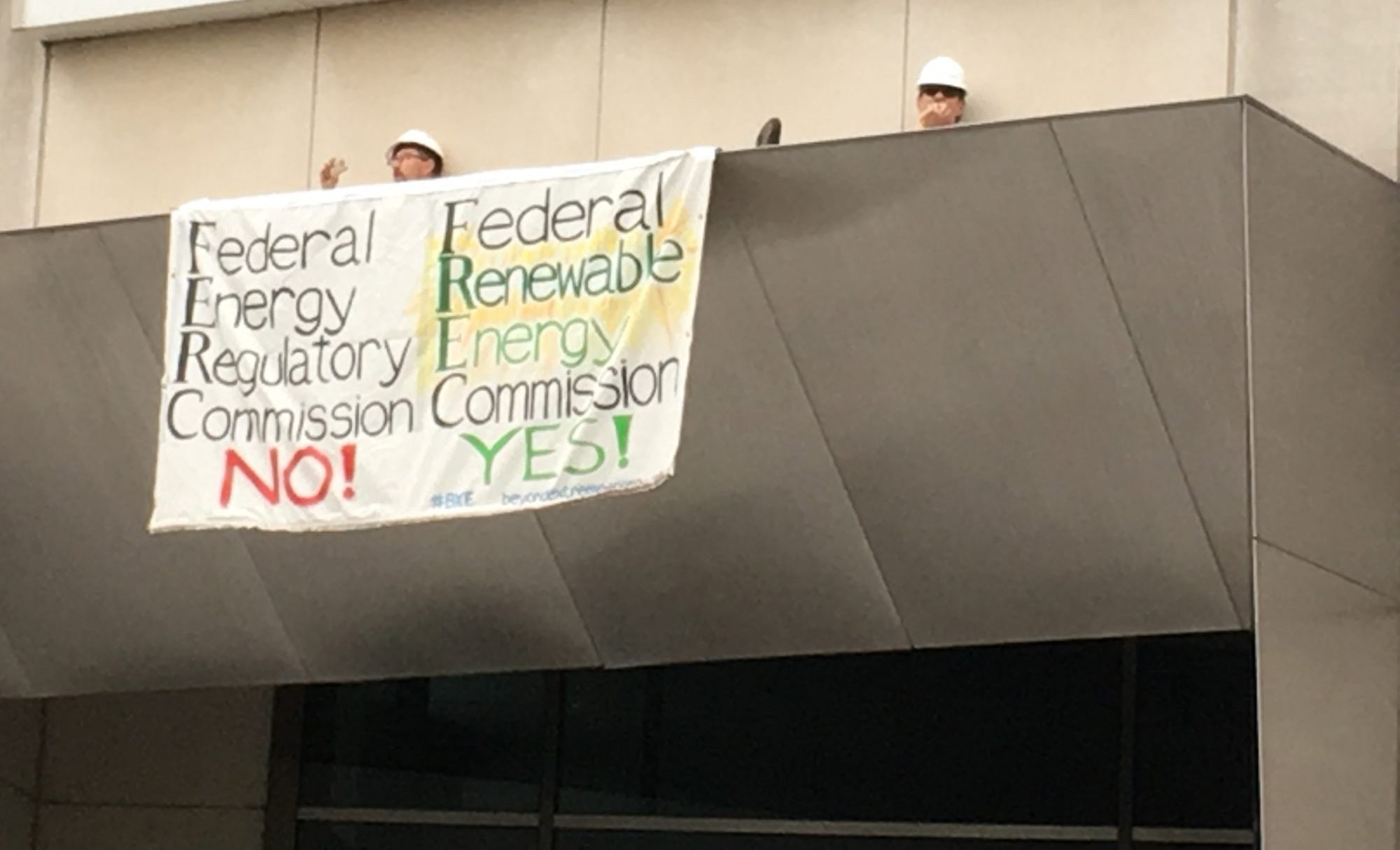 The action was taken by Beyond Extreme Energy on behalf of millions of affected citizens who are frustrated by years of FERC’s approvals of pipelines and other fossil fuel infrastructure, and alarmed by Donald Trump’s recent Executive Orders to further expedite pipeline approval.

“The Federal Energy Regulation Commission, FERC, has for years been overseeing a major expansion of the destructive fracked gas industry,” said Ted Glick, one of the activists who climbed more than 25 feet to hang a banner over FERC’s door that said: Federal Energy Regulatory Commission NO! Federal Renewable Energy Commission Yes! “FERC is a rubber-stamp agency. It has rejected only two out of over 400 gas industry proposed pipelines and other gas infrastructure over the last 30 years. And at today’s meeting commissioners could approve two new liquefied natural gas export terminals in the criminal enterprise to hook the world on U.S. fracked gas for decades.”

Fracking contaminates water, poisons the air and land, leads to earthquakes and to methane leaks that accelerate dangerous global heating. With scientists warning that we have less than

12 years to radically re-make our economy to avoid the worst impacts of climate chaos, activists are demanding that Congress replace FERC with FREC, the Federal Renewable Energy Commission.

Congress has the power to remake FERC into FREC as part of a Green New Deal. The FREC agency would be an important part of plans to regulate our nation’s electrical grid, prioritize the growth of renewable energy, and reject all gas industry expansion and other fossil fuel projects.

“Congress has a choice to make: they can pay lip service to climate action while Donald Trump orders pipeline after pipeline built — locking in another 50 years of increasing emissions, gas exports and climate chaos,” said Drew Hudson, the other BXE climber. “Or Congress can choose to put renewable energy first and enact a Green New Deal that remakes FERC and other agencies. It’s past time to move urgently to get off fossil fuels!”

More can be found at the BXE Facebook and FRECnotFERC.com