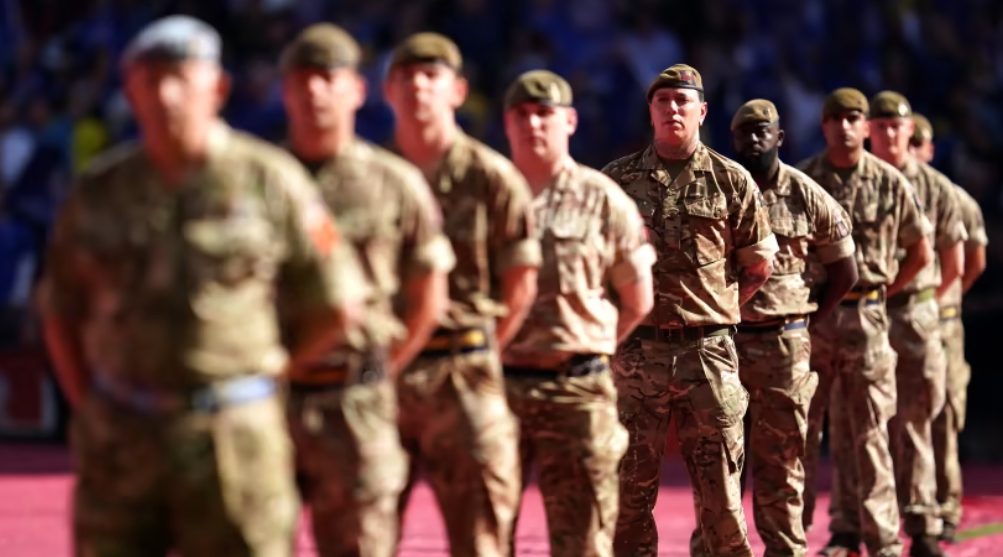 An Atrophied And Warlike Kingdom

As reported recently across the U.K., General Sir Patrick Sanders, the British Army’s new Chief of the General Staff, overall controller of the British Army, has stated that today’s generation of British soldiers must prepare “to fight in Europe once again” as the conflict in Ukraine continues.

The Sun newspaper banner headline on 18th June had it thus: “UK army must get ready to fight the Russians and win in potential WW3, says Britain’s top general”. The newspaper added that “He vowed to forge an Army that can beat Russia in battle.”

“There is now a burning imperative to forge an Army capable of fighting alongside our allies and defeating Russia in battle,” Sir Patrick is reported to have said.

“We are the generation that must prepare the Army to fight in Europe once again”.

General Sanders adopted a deliberate invocation of a Second World War register in his speech to the Royal United Services Institute’s (RUSI) annual “Land Warfare Conference” on 28th June.  In “conjunction with our NATO allies and partners,” the UK must “meet strength with strength from the outset and be unequivocally prepared to fight for NATO territory.”

Finally he uttered the chilling note  “The British Army must be prepared to engage in warfare at its most violent.”

Indeed, once again Britain is stoking the flames of war, even to the extent of inciting the insanity of a global nuclear cataclysm.

This is fire-breathing rather than hot air, and it occurred in the week that Boris Johnson made an unscheduled visit to Ukraine. Greeted at the airstrip with a casual “Hi, Boris” from Volodymyr Zelensky, he later assured the latter that a new training program for Ukrainian forces would be provided by the U.K.

I referred in a March article  to Ian Cobain’s piece published in the Guardian in September 2016 in which he stated that Britain has been to war more than any other country in history. He concluded his article with these words:

“For more than a hundred years, not a single year has passed when Britain’s armed forces have not been engaged in military operations somewhere in the world. The British are unique in this respect: the same could not be said of the Americans, the Russians, the French or any other nation.

Only the British are perpetually at war.”

Once again Britain is complicit in escalating a conflict, as it did with the Iraq invasion of 2003: a war which has resulted in the deaths of at least 800, 000 people to date, overwhelmingly civilians. (Over 600,000 violent deaths occurred between March 2003 and June 2006, according to the Lancet Survey).

War talk from all sides at Westminster has been upping the ante in Ukraine from the very start of the Russian intervention in February, an intervention launched to protect the Russian speaking Donbas region. The wisdom of the military intervention is, of course, open to criticism.  Nonetheless, given that the attacks by fascist militias on the region had actually been ongoing for eight years, causing 14,000 deaths there,  and adding the deliberate eastward expansion of NATO over a longer period, it is reasonable to view these two developments as efficient causes.

As bad, or worse, are their complementary doppelgängers on the Labour benches. Wallace’s Defence shadow Labour counterpart, the supposed “socialist” John Healey, urged in his Times article of 25th February the “reinforcement…of Nato allies”, by expanding “military deployments” on Russia’s border.   Earlier in February, in a speech to the House of Commons, he reiterated that “Labour is THE party [my capitals] of Nato. All wings of our party supported its formation, and I am proud of the leading role Attlee’s government played in forging this successful post-war pact”.  A further article in the same newspaper on 19th May called for Britain “to lead within NATO”.

In the Ukraine War debate in the House of Commons on 25th April 2022, no Labour voices, neither Stephen Kinnock nor Hilary Benn, could summon up any kind of objective stance on the conflict, nor any notion of peace as a desirable aim.  Never mind that thousands of poorly trained Ukrainian troops, many of whom are conscripted, are dying.  John Healey capped it with his description of the Azov Nazi Regiment of fighters, among whom there were certainly  British, Polish and American far-right ideological mercenaries, as “heroic”. Here are his actual words:  “That bravery is led by President Zelensky personally, but it is typified by the military last stand of the troops at the Azovstal steel plant and by the people’s resistance in Russian-occupied Kherson.”

Succinctly summed up as the “craven nature of Labour’s ideological allegiance to empire and its desire for the destruction of governments and populations who defy it”  we are witness to an atrophying of humanity and morality in the political life of the U.K. today. Yet, it must be said, this is entirely in keeping with its history.

With such an administration and opposition, the picture of a reactionary warlike nation state emerges with incontrovertible clarity.