Rage Against The War Machine Marches To Call Out War Profiteers

Above photo: (and all photos) by Ted Majdosz.

Washington, DC – On Friday, October 11, 100 anti-war activists took to the streets of Washington, DC to visit the War Machine as part of Cindy Sheehan’s “Rage Against the War Machine” weekend of actions. This is the second annual event by Women’s March on the Pentagon. This year, the march was planned for a weekday so workers would be present to hear the messages at the various stops along the way.

The Rage Against the War Machine march started at the site of a principal instigator of wars, the White House, where the Commander in Chief resides. Over the past decades, successive administrations have enhanced the power of the President’s office, including the power to wage war without approval from Congress or the United Nations. Throughout this century, the US military has attacked or provided support for attacks in countries throughout Africa, the Middle East, Asia, and Latin America. Under the direction of the Commander in Chief, the US military has also conducted extrajudicial murders and built up a military presence around major targets of the current national security strategy, Russia, China, and Iran. 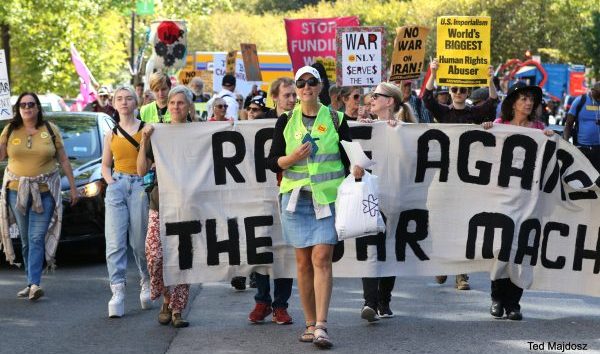 From there, the march proceeded to the International Monetary Fund (IMF) office. Dominated by the United States, the IMF is an important tool not only to enrich US corporations through contracts for large projects in other countries but also to force austerity as a way to create economic insecurity and unrest, which prepare countries for regime change efforts. Cindy Sheehan recognized the current uprising in Ecuador and its connection to a $4.2 billion dollar IMF loan that was approved around the time President Lenin Moreno permitted police to enter the Ecuadorian embassy in London to arrest Wikileaks editor Julian Assange. Protests erupted ten days ago in Ecuador when President Moreno announced a new package of austerity measures, including cuts to fuel subsidies, wages, and pensions and firing public workers, justified by the need to repay the IMF loan.

Standing on a bench in front of the IMF office, Judy Bello of the United National Antiwar Coalition said: “When people think about war, they usually think about the military…. The US is conducting another type of war that is equally devastating, an economic war against most of the developing countries of the world.” Bello said the United States has sanctions against 21 countries right now, which are preventing people from having access to food, medicines, and funds for rebuilding countries that have been destroyed by war. The US is also physically blockading countries such as Yemen from deliveries of food and supplies and stealing assets from countries such as CITGO, which is owned by Venezuela.

Dakotah Lilly, of March on the Pentagon’s youth and student group and a solidarity activist with Venezuela, also spoke. He called out the US embargo against Venezuela that has quadrupled the price for ships to deliver goods. He referred to the IMF as a member of the ‘international oligarchy’ that “doesn’t care what country you are from, they will exploit you just as much.” 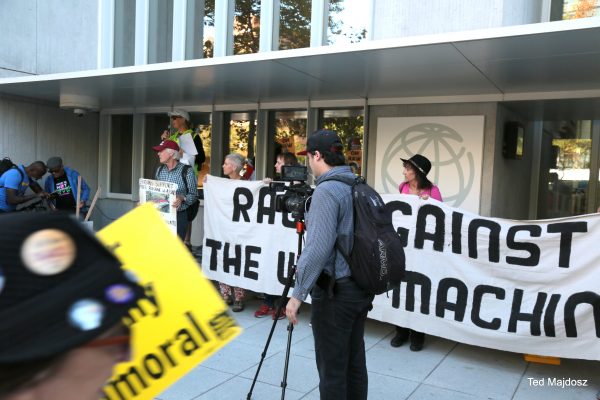 From there, the march proceeded to McPherson Square, which is on K Street, the major avenue for lobbyist’s offices in DC, to rage against the Democratic Party. Sheehan spoke about the promise Democrats made to her that if she helped elect them, they would end the wars. She left the Democrats when she realized they were lying to her.

Diane Moxley of the New Jersey Green Party spoke at that stop, saying the Democrat’s focus on the Republicans is a distraction from talking about the real issues facing people in the United States. Moxley said, “What we all need to be doing right now is raging against the war machine and the military-industrial complex. They commit atrocities around the globe in our name and for no other reason than the big profits of their corporate donors and the wealthy elite…. What we have going on right now has nothing to do with our security. It is about greed.”

Jan Weinberg, who works with CODEPINK’s divest from the war machine campaign, spoke about attending a meeting at the Atlantic Council sponsored by Raytheon the day before. The meeting was about cybersecurity, a new profit center for the military-industrial complex (MIC). Weinberg described how members of Congress invite speakers from the Atlantic Council to testify in favor of the need for more weapons even though those members receive donations from the same weapons manufacturers who will make a profit.

Emma Fiala of Women Against Military Madness then spoke about the connection between the Atlantic Council and the censorship of independent media. Fiala noted that the Facebook purge of independent media sites happened exactly one year ago in partnership with the Atlantic Council. She said, “One year ago, as part of their efforts to fight ‘fake news’ and to not have people meddling in elections or whatever they wanted to say about it, they purged 800 important pages and people from Facebook. They gave them no warning. They gave them no explanation. They gave them no opportunity to get their pages back and some of these pages had millions of followers.” She encouraged people to follow independent media directly at their websites. 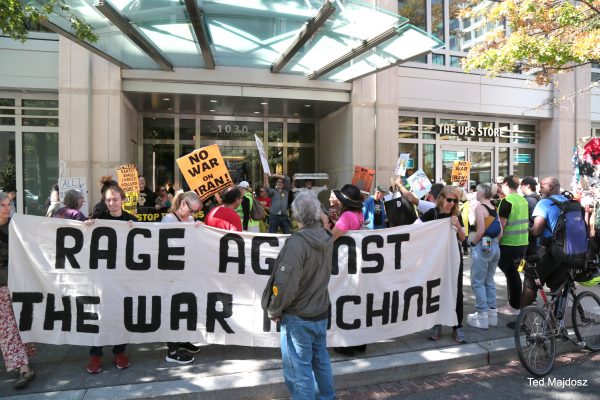 Finally, the marchers headed to the Washington Post where Kevin Zeese and I spoke about the connections between its owner Jeff Bezos and his hundreds of million-dollar contracts with the CIA. We also spoke about the ways corporate media outlets lie and manufacture consent for wars and the need for independent media to tell the truth. Zeese urged everyone to follow independent media outlets and share their content in whatever way they can to overcome media censorship.

After that, members of the march held a die-in in front of the Post, which also locked its doors.

Watch the full video below.