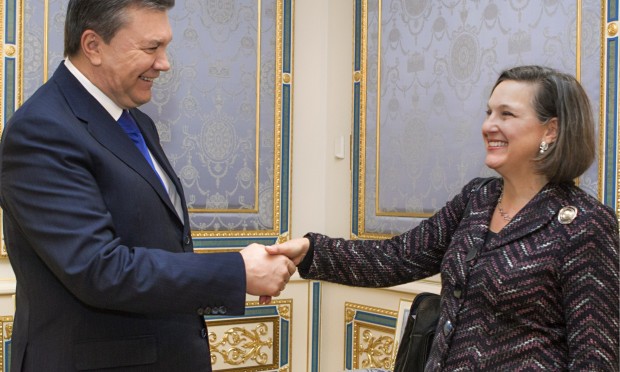 US Efforts To Remove Ukrainian Leader Replace With Opposition Exposed

Ukraine’s protest standoff came dangerously close to becoming a direct confrontation between Russia and the United States on Thursday as shockingly unguarded words from Washington and Moscow officials reached public ears, either voluntarily or otherwise.

A recording of a phone conversation between two senior U.S. diplomatic officials, in which they discussed their efforts to influence the membership of the Ukrainian government that would be formed to replace the one dismissed under protester pressure by President Viktor Yanukovych, was leaked to the public – almost certainly by an intelligence agency – just as one of Russian President Vladimir Putin’s top aides issued a direct threat to the United States over its involvement in Ukrainian affairs.

Mr. Yanukovych’s explicitly pro-Russian government has long been accused of being a puppet of Mr. Putin – especially after it abandoned a European Union open-borders treaty in November to instead endorse a trade-and-aid deal with Russia, a move that angered many Ukrainians and provoked the protests that have convulsed the nation for two months.

But now, with the leak of the apparently bugged State Department call, the Kremlin and Mr. Yanukovych have new ammunition with which it can accuse the protesters of being puppets of U.S. and European agendas.

The call, if it is genuine, was posted on YouTube by an anonymous source on Tuesday under the headline “puppets of Maidan,” a reference to the protests in Kiev’s central square. It was then linked on Twitter by Russian government officials on Thursday – exactly as U.S. and European Union officials were descending on Kiev to try to broker a resignation, a new election and a constitutional change from Mr. Yanukovych.

The voices the audio resemble those of Assistant Secretary of State Victoria Nuland and Geoffrey Pyatt, the U.S. ambassador to Ukraine. They appear to be talking about their preference of political party leaders to form a new Ukrainian government, and about their efforts, including several phone calls to Mr. Yanukovych by Vice President Joe Biden, to influence that outcome. The EU was prepared to begin negotiating government-opposition talks toward a new government on Friday.

Much of the call is devoted to efforts to keep Ukrainian liberal parties in government, and to prevent right-wing ultranationalist parties, which have been prominent in the protest movement, from gaining influence.

“I’m just thinking in terms of sort of the process moving ahead, we want to keep the moderate democrats together,” Mr. Pyatt says at one point. Ms. Nulund explicitly endorses moderate opposition party leader Arseniy Yatseniuk and argues that “what he needs” is fellow opposition leaders Vitali Klitschko, a former boxer with a populist style, and Oleh Tiahnybok, a far-right leader whose party is known for intolerance.

“I think Yats [Yatseniuk] is the guy who’s got the economic experience, the governing experience … what he needs is Klitsch and Tiahnybok on the outside,” she adds. Mr. Pyatt says: “Let me work on Klitschko, and I think we get a Western personality to come out here and midwife this thing.”

And then Ms. Nuland says, a propos of nothing: “And you know, fuck the EU.” This was an apparent reference to the EU’s hesitancy to threaten to impose sanctions on the Yanukovych government, something the U.S. – and Canada – have done. On Thursday, the European Parliament voted to impose limited sanctions, including the stripping of visas, on Ukrainian officials directly responsible for violence.

An aide to Russian Deputy Prime Minister Dmitry Rogozin was among the first to tweet about the video – about seven hours before the video’s existence was widely known. In Washington, that apparent Russian connection was pointedly noted. State Department spokeswoman Jen Psaki did not dispute the authenticity of the recording and said that Ms. Nuland had apologized to EU officials for her remarks, but added that Moscow’s apparent role in publicizing the video was “a new low in Russian tradecraft.”

An aide to Mr. Putin, seemingly in response to the diplomats’ bugged phone conversation, used an interview with a Ukrainian newspaper to attack the U.S.

Sergei Glazyev, a top adviser to the Russian president, said that U.S. “interference” contravened a 1994 treaty that granted Ukraine its independence from the Soviet Union and guaranteed that outside nations would not intervene. Russian leaders, he told the paper, “are obliged to intervene when conflict situations of this nature arise.”

Asked if violence should be used to remove the protesters, Mr. Glazyev said: “As for starting to use force, in a situation where the authorities face an attempted coup d’état, they simply have no other course of action. Otherwise, the country will be plunged into chaos.”

Mr. Putin this week suggested he may withdraw the $15-billion (U.S.) in aid it had pledged Ukraine if the country sides with the U.S. and the EU, and to bill Ukraine, whose currency is collapsing, $3-billion for the Russian natural gas it has used.

Before flying to the Russian city of Sochi Thursday evening, Mr. Yanukovych met with EU foreign minister Catherine Ashton. And his public statements were diplomatic. He spoke cordially with Ms. Nuland, the State Department official in the alleged phone call, who met with him in Kiev before he left. His office then issued a statement saying that only “dialogue and compromise [could] carry the country out of this political crisis.”