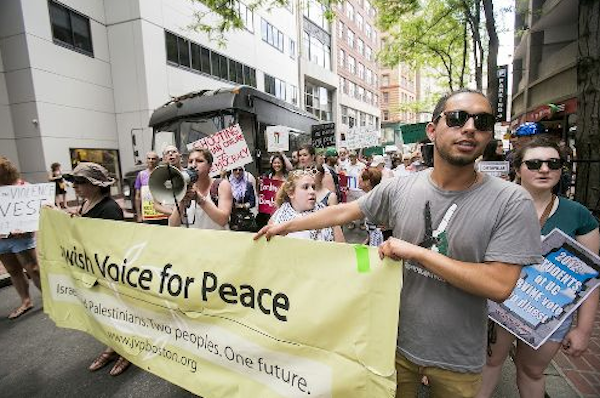 Bostonians March For End To Violence In Israel/Palestine

Boston, MA – Hundreds of students, faith leaders, and activists from 15 local organizations marched today to protest Israel’s escalation of violence against Palestinians, citing 52 killed and 450 injured in Gaza in just the last two days. They picketed the downtown Boston locations of three companies they say are complicit in the violence: TIAA-CREF, Veolia, and Macy’s.

At Park Street, Claire Gilbert from Grassroots International opened up the event by declaring that “The wrenching events unfolding in Israel and Palestine are not random; they are part of the system of occupation itself.”

The protest’s tone remained solemn in honor of the Palestinian and Israeli lives lost since mid-June. Karlene Griffiths, a pastor in formation in the United Church of Christ who recently returned from a delegation to Palestine, led a moment of silence and a reading of names. “We weep, we mourn, we move forward and we fight,” Griffiths said.

The crowd then marched to Macy’s, where they called for a boycott of Sodastream products produced in an illegal settlement, then to the Boston offices of Veolia Energy, whose parent company operates a light rail serving illegal settlements in East Jerusalem.

“Veolia is not above the law,” said Andre Francois of the Boston School Bus Drivers Union, who is working locally to oppose Veolia’s union-busting. “No more abuses in Palestine or Boston.”

The final stop was at the offices of pension fund TIAA-CREF, where the demonstrators called for disinvestment from companies such as Hewlett-Packard, Motorola, and prison contractor G4S.

“As we all witnessed Israeli jets bombing Palestinian civilian areas this week, Israeli troops storming Palestinian refugee camps and cities, and the killing of Palestinian civilians, I am reminded how complicit the US government, US corporations, and American taxpayers are in the human rights abuses committed by Israel,” declared Thomas Abowd, a professor at Tufts University and a shareholder of TIAA-CREF.

National Week of Action calls for Divestment from Occupation

This demonstration was one of 15 taking place across the country as part of the “We Divest National Week of Actions,” marking the progress of the Boycott, Divestment, and Sanctions (BDS) movement to hold Israel accountable for violations of Palestinian human rights.

Protesters held signs emblazoned with corporate logos of companies targeted by BDS, detailing their role in Israel’s occupation and victories of campaigns against them. One sign read, “Veolia dumps settlement waste on Palestinian land. In 2013, TIAA-CREF dumps Veolia from its social choice fund.”

Other speakers included Dina Jacir, a Palestinian-American co-founder of Students for Justice in Palestine at Hampshire College; Holly Bicerano, a student at Boston University; Maria Peniche, an immigration activist who related her experience crossing the US/Mexico border to that of Palestinians; and Jason Lydon of the prison abolitionist organization Black and Pink, who condemned mass incarceration in the United States and in Israel.

Jewish Voice for Peace-Boston is a local chapter of the largest US-based grassroots organization dedicated to promoting full equality, democracy, and self-determination for both Israelis and Palestinians. JVP supports nonviolent efforts here and in Israel-Palestine to end Israel’s Occupation, expand human and civil rights, and implement a US policy based on international law and democracy. We Divest is a national, coalition-led initiative by Adalah-NY, the American Friends Service Committee, Grassroots International, Jewish Voice for Peace, the US Campaign to End the Israeli Occupation, and the US Palestinian Community Network