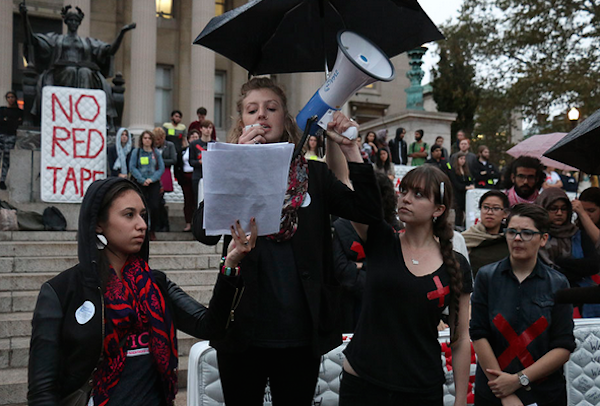 ‘Carry That Weight’ National Day Of Action At Columbia And Beyond

Cindy Ma / Senior Staff Photographer. NO MORE | The rally drew support from 28 other student groups on campus, ranging from Students for Justice in Palestine to the Kings Crown Shakespeare Troupe.

More than 150 Columbia students, faculty, and community members gathered on Low Steps on Wednesday holding mattresses, pillows, and signs to rally against the University’s handling of sexual assault on campus.

Billed as a National Day of Action to “Help Carry the Weight,” the event was inspired by the senior art thesis project of Emma Sulkowicz, CC ’15. For her thesis, titled “Mattress Performance: Carry That Weight,” Sulkowicz will carry a mattress with her as long as her alleged rapist still attends Columbia, as a protest against the University’s systemic mishandling of sexual assault cases.

The rally, organized by student activist groups No Red Tape Columbia and Carrying the Weight Together, also drew support from 28 other student organizations—representing the 28 students who have filed federal complaints against Columbia since April. The groups included CU Swing Dance, Everyone Allied Against Homophobia, and the King’s Crown Shakespeare Troupe, among others.

“We’re standing in solidarity with each other, with survivors on this campus to say ‘hey’ to the administration, that this is not ok, we can’t allow people who perpetrate violence to remain on campus,” said Cara Hoffman, BC ’17, a member of the Columbia Women’s Rugby Team. For the rally, she decorated a mattress with signatures from team members.

“We understand that reports about these cases in the media can be deeply distressing, and our hearts go out to any students who feel they have been mistreated,” the statement said.

“What I needed was not just a campus to take classes on, but a community,” Rosie Hoffman, GS ’13, said at the rally. “People aren’t safe without a community.”

In addition to campus activists, the rally drew support from organizations including Planned Parenthood of New York City and the National Organization for Women NYC, and featured speakers from various nonprofit organizations working on the issue.

Emily May, cofounder and executive director of Hollaback!, an organization that works to stop street harassment, encouraged the crowd to stand up for the cause.

“Tonight is proof that the revolution will be run by badasses,” she said.

“Friends and classmates can help stop rape and harassment and stalking before it begins. What we need is more funding for rape crisis centers, not just in wonderful lily-white neighborhoods, but all through the city,” James said.

Other speakers talked about including more women of color and LGBTQ communities in discussions about sexual assault response.

Darializa Avila-Chevalier, CC ’16, read an excerpt from her article in The Eye, in which she discussed the “absence of women of color in discourse about sexual violence,” a problem she said stems from individuals feeling “their voices are not welcome.”

Many students said they were struck by how “Carry That Weight” is bringing a largely personal struggle into the public eye.

“People are bringing places where they sleep and where this act usually takes place and affects them the rest of their lives and bringing them out to the public where they are not usually seen,” Jenna Ledet, BC ’16, said.

“This is a very sensitive topic, but I’m extremely proud to be a part of a community that shows such support. I feel empowered just being here and seeing so many people, so many faces,  unexpected faces too, it’s amazing,” Jennifer Guzman, BC ’18, said. “And I think just seeing that is really going to raise awareness.”

Carried around the world

Although the idea of using a mattress to fight sexual assault on campus began close to home, Carrying The Weight Together has become a national movement, as colleges across the country held rallies for the National Day of Action. Affiliated rallies also reportedly took place in the U.K. and Singapore.

“People were in our quad today, and they sat there silently,” Shannon Henry, City College of New York ’18, said. “They had flyers on their mattresses that said ‘rape is a problem everywhere on college campuses and silence won’t make it go away.’”

Students at Brandeis University were encouraged in an email from their university’s assistant vice president for health and wellness to participate in the day’s events.

“We are all in this together and we support our students’ efforts to raise awareness on this important issue,” the email read.

At Vassar College, Vassar Student Association President Carolina Gustafson sent a similar email to the Vassar student body, saying that students would “have an opportunity to stand in solidarity with this movement” on their own campus.

The Day of Action also gained traction at Harvard University, where Ariane Berelowitch, Harvard ’15, helped organize a group of students for a collective mattress carry. Student group Our Harvard Can Do Better, the university’s equivalent to No Red Tape, also organized a mattress carry of its own.

‘PrezBo, you can’t hide from us’

After the rally, student activists walked from Low toward University President Lee Bollinger’s residence at 116th Street and Morningside Drive, chanting, “PrezBo, PrezBo, you can’t hide, be the leader on our side,” and, “Rape culture is contagious, come on PrezBo be courageous.”

Despite the changes made to the University’s sexual assault policy this past summer and an op-ed published today in the New Republic by Bollinger and Suzanne Goldberg, the University’s special advisor to the president on sexual assault prevention and response, many student activists have continued to express frustration with what they feel is a lack of productive dialogue with the administration.

At the end of the rally, activists tweeted a photo of a white mattress with a list of 10 demands, ranging from removing the deans from the adjudication process to reopening Sulkowicz’s case under Columbia’s revised sexual assault policy.

By Wednesday evening, when most of the crowd had scattered from rain and darkness, it was Sulkowicz who spoke in front of Bollinger’s house.

“Your new policies were a step in the right direction, but they still suck a lot,” she said.