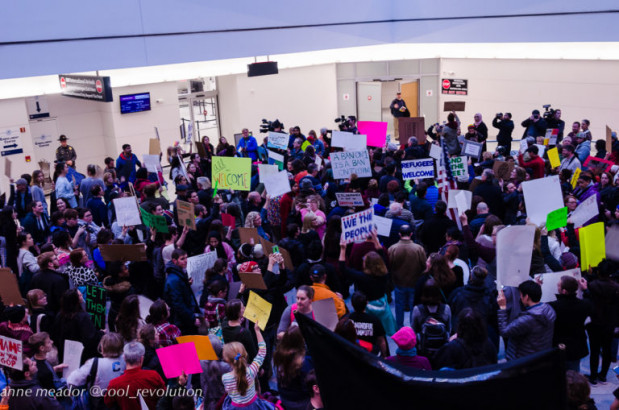 Dulles And BWI Overwhelmed With Protests Against ‘Muslim Ban’

Above Photo: More than a thousand people protested at BWI Airport on Sunday./Photo by Anne Meador

Spontaneous demonstrations popped up at airports across the country after President Donald Trump issued an executive order banning nationals from Muslim-majority countries. Immigration advocacy groups slammed the move as xenophobic and Islamophobic.

The sweeping order applies to nationals of seven countries, including, Lybia, Iran, Iraq, Somalia, Syria, Sudan, and Yemen, whether they have green cards, visas or hold dual citizenship with the U.S. Issued late on Friday afternoon, the executive order caught many travelers by surprise, stranding them at international airports and making those arriving in the U.S. subject to detention and deportation.

“We want everybody to know immigrants are here, will stay here and continue coming until we decide otherwise,” said Payam Hiram, an organizer with Baltimore Bloc.

Volunteer lawyers also appeared to assist anyone who might be detained under the executive order.

“Much of what [Trump] purported to do in that order I believe was beyond his power and is illegal under the constitution,” said Maureen Sweeney, a law professor at the University of Maryland. She was among a group of lawyers who had set up a table inside the international concourse to offer free legal advice.

Federal courts in New York, Massachusetts, Virginia and Washington issued stays against the order and subsequent detentions of those coming into the country yesterday, but U.S. Customs and Border Protection (CBP), an agency of the Department of Homeland Security (DHS), was not fully complying.

At Dulles, U.S. Senator Corey Booker and several members of Congress attempted to speak to CBP officials but were rebuffed.

An elderly couple from Iraq who have greencards were detained for several hours, and Virginia Governor Terry McAuliffe tried to intervene when a five-year-old from Iran was detained overnight. In spite of court orders, those being detained have not been allowed to speak with lawyers.

No one so far has been reported detained at Baltimore-Washington Airport. In response to an inquiry from Maryland State Delegate Marc Korman, BWI tweeted on its official account, “The federal government has not informed us of any cases at BWI Marshall Airport.”