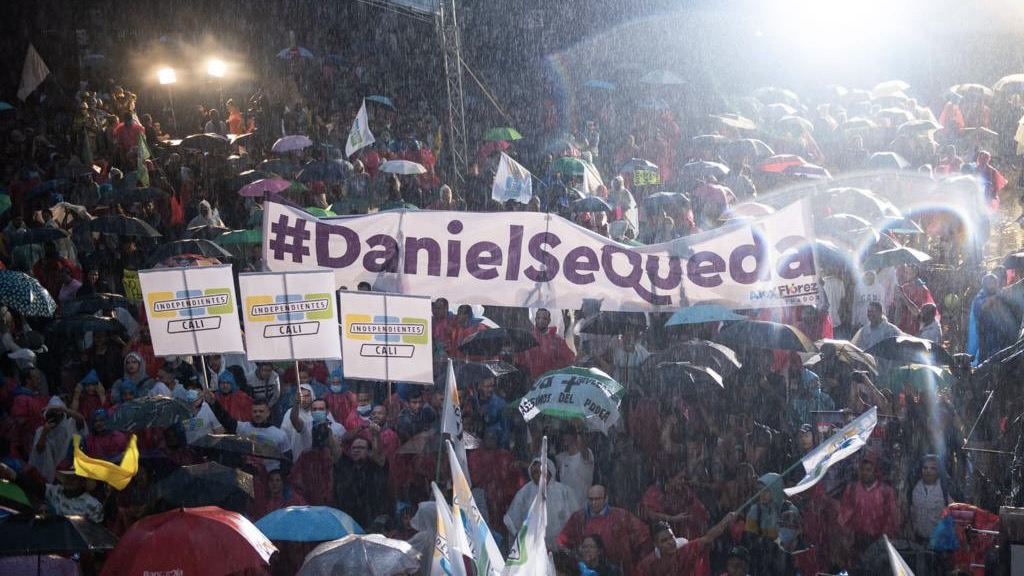 Colombia: Progressive Leaders Reject Suspension Of The Mayor Of Medellín

Above Photo: Thousands mobilized in Medellin on May 11, 2022 to defend the mandate of Mayor Daniel Quintero who was suspended by the Inspector General’s Office following a tweet. Daniel Quintero / Twitter.

The frontrunner in the upcoming presidential elections, Gustavo Petro, has described the provisional suspension of Mayor Daniel Quintero as a “coup d’état in Medellin.”

He has called on the citizens to mobilize in defense of democracy.

The Colombian Inspector General’s Office, on May 10, suspended the mayor of Medellín, Daniel Quintero, from his position for his alleged political participation in the upcoming presidential elections. The decision provoked a widespread political uproar. Several progressive leaders condemned the decision and accused the Inspector General of siding with the ruling right-wing party and breaking the American Convention on Human Rights that states that an administrative entity cannot suspend an official elected by citizens’ votes.

The Inspector General’s Office suspended Quintero for a video that he published on Twitter on May 10, in which he pushes the gear lever of a car towards first and says “the change in first.” This was interpreted as an expression of endorsement for the candidacy of progressive Gustavo Petro of the left-wing Historic Pact coalition, since “the change in first” is one of the slogans that the Historic Pact is using in its campaign to call on voters to support Petro win the elections in the first round on May 29.

Inspector General Margarita Cabello, through a video message posted on Twitter, pointed out that Colombian law prohibits public officials from participating in electoral politics. “The Inspector General’s Office has the constitutional and legal competence to investigate, provisionally suspend and sanction, even with dismissal and disability, all public servants in the country, including those elected by popular vote,” she argued. She added that “there is no statutory law, no public servant, from the lowest rank to the highest level, can use the position to participate in the activities of political parties and movements and in political controversies, without prejudice to the rights provided for in the Constitution and the law.”

In addition to Quintero, the Mayor of Ibagué, Andrés Hurtado, a councilor in Calarcá, Gustavo Adolfo Herrera, and the representative of Nátaga, Grenfell Lozano Guerrero, were also suspended from their positions for their “alleged and repeated involvement in political activities and controversies.”

Upon learning of his suspension, Quintero took to Twitter to express his rejection of the measure. In a series of tweets, Quintero condemned the decision, stating that “a coup d’état has begun in Colombia”, “Democracy is at risk. They want to remove us from office to intervene in the presidential elections”, and “(Former president and founder of the ruling Democratic Center party Alvaro) Uribe and Cabello agreed to remove me from office, but they shall not pass”.

Quintero criticized that “The Inspector General pushed by Uribismo suspends us from office, in 12 hours, without competence or due process, without the right to defense, violating our political rights, the Constitution and the law, the IACHR, but especially the popular will.” Despite heavy rain, thousands responded to his call on the citizens of Medellín to join a protest on May 11 at the Plazoleta de la Alpujarra in defense of democracy and popular will, emphasizing that “the Inspector General has violated our political rights.”

The frontrunner in the upcoming elections, Gustavo Petro, also described the provisional suspension as a “coup d’état in Medellin.” Petro called on the citizens and the Inter-American Commission on Human Rights (IACHR) “to defend the popular vote,” stressing that “the Inspector General cannot evade the popular mandate.”

The progressive leader recalled his unconstitutional and unconventional dismissal when he was mayor of Bogotá and explained how the IACHR ruled against that decision in 2014. “A fascist prosecutor (Alejandro Ordóñez) had already suspended me as mayor and the sentence of the IACHR was blunt: an administrative body cannot suspend the effects of the citizen vote. The prosecutor, seeking to help Duque’s presidential candidate, has broken the American Convention,” he wrote in a tweet. Petro also called on the people to mobilize in defense of democracy. “Those who today feel sympathy for my candidacy should prioritize popular mobilization to enforce the popular vote in Medellin.”

Human rights activist and legislator Iván Cepeda criticized the Inspector General for being biased. “Inspector General Cabello is a biased official. Her participation in politics in favor of Uribismo is evident. Months ago, I presented her with (requests to take) actions against mayors (who pronounced themselves) in favor of Federico Gutiérrez (the candidate of the right-wing Creemos Colombia movement). I have not yet received an answer. On the other hand, she suspended Mayor Quintero within 24 hours,” tweeted Cepeda.

In another tweet, Cepeda condemned the Inspector General for her inaction against president Iván Duque for his acts influencing public opinion. “Attorney Cabello, President Duque announced that he would vote in the presidential primaries. (At that time,) you remained silent in complicity,” he wrote.

Similarly, presidential candidate for the centrist Hope Center coalition, Sergio Fajardo, also condemned the president for his interference in public acts on political issues favoring Gutiérrez. During a debate last night, Fajardo said that “there has been a lot of shameless political participation. The president of the republic himself showed that because he had voted on March 13. Just yesterday, we filed an accusation against the president of the republic, who has done the greatest political participation according to me, and of course there has been no type of sanction or call for attention.” Fajardo accused the national government of having “co-opted the control agencies,” and said that “the Inspector General’s Office is not reliable.”

Legislator Juanita Goebertus of Green Alliance also highlighted that “The Inter-American Court of Human Rights has been clear that the Inspector General’s Office cannot suspend elected officials,” adding that “the electoral participation of Daniel Quintero and of Iván Duque have been clear, but it is the judges who can sanction them.” “Do not continue to put the rule of law at risk,” he further added.