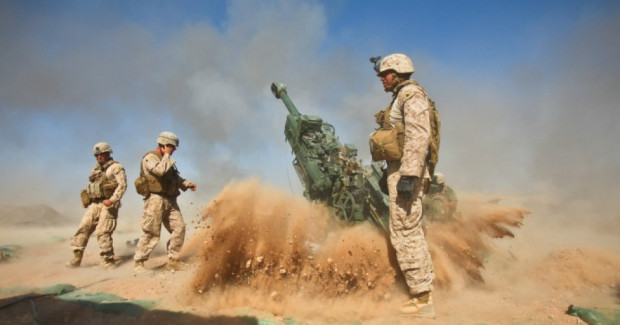 Trump Escalates US War In Syria

Above Photo: Marines on the ground include part of an artillery battery that can fire powerful 155-millimeter shells from M-777 Howitzers,” the Washington Post reported. (Photo: DVIDSHUB/flickr/cc)

U.S. marines are in Syria to augment the fight against the Islamic State (ISIS) in the battle for Raqqa, the militant group’s de facto capital, having quietly arrived in the country weeks ago, defense officials confirmed to the Washington Post on Wednesday.

About 400 new troops have been deployed overall, in addition to the 500 already on the ground. The plan had been in the works “for some time,” according to the Post’s Dan Lamothe and Thomas Gibbons-Neff.

The force is part of the 11th Marine Expeditionary Unit, which left San Diego on Navy ships in October. The Marines on the ground include part of an artillery battery that can fire powerful 155-millimeter shells from M-777 Howitzers, two officials said, speaking on the condition of anonymity because of the sensitivity of the deployment.

Although the deployment is temporary, it may be a signal that the Trump administration will give the Pentagon more flexibility in calling the shots in the fight against ISIS, as military commanders had portrayed themselves as being micromanaged under former President Barack Obama, the Associated Press notes.

The Obama administration’s still-existing limits say the military can have no more than 503 U.S. forces in Syria—but temporary personnel do not count towards that cap.

Although the move does not explicitly confirm that the U.S. will significantly change its fight against ISIS, it comes as President Donald Trump considers a new plan to defeat the group, submitted by the Pentagon last month.

Axios reports that U.S. Central Command chief Gen. Joe Votel will likely testify before Congress about it on Thursday.

Meanwhile, collateral deaths of civilians continue to climb, with the Airwars monitoring group estimating that more than 2,500 people have been killed as a result of the U.S.-led coalition’s air campaign in Syria and Iraq.

A U.S. official told reporters Wednesday that “Raqqa will probably not be the final battle against ISIS.”