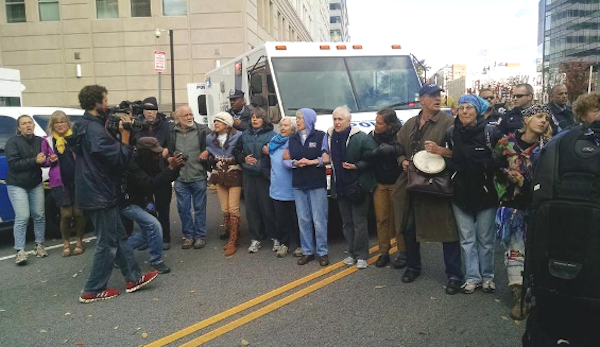 As the participants in the Great March for Climate Action ended up in Washington, DC, on Nov. 1 after a six-month trek across the country, they joined with other environmental groups to launch a week of action under the banner Beyond Extreme Energy. The actions revolved around a series of blockades at the DC headquarters of the Federal Energy Regulatory Commission (FERC) with more than 100 people arrested.

Nonviolent direct actions began on Monday with 25 protestors arrested outside FERC’s office while blockading the entrance with a giant sign depicting families impacted by frackinginfrastructure greenlighted by FERC. Today was the final day of the actions intended to call attention to FERC’s approval of projects that endanger communities and drive climate change, and demand a more inclusive and open hearing process.

On Wednesday, 5o activists from across the country blockaded FERC’s offices, led by a group of students from Hampshire College in Massachusetts who came to D.C. specifically for the action, representing students and young people everywhere. Another 16 people were arrested.

“As students were in a particular position where our future is uncertain,” said Hampshire student Dineen O’Rourke, a student from Hampshire College. “We’re ready to come together to resist the injustice FERC is serving us to our future and to communities already facing the brunt of the climate crisis.”

“Yesterday’s election was a demonstration of what happens when voters are fed up with politicians who talk without action,” added Drew Hudson, director of Environmental Action. “On a night that otherwise favored conservative, anti-environment candidates, voter in the tiny community of Denton—in the heart of Texas oil country —chose to ban fracking. This movement that’s shutting down FERC, shutting down Cove Point, and resisting in countless communities from New York to California is coming for the pundits and politicians. They had better get ready for us.”

Thursday, about 35 activists again shut down FERC’s offices in a campaign led by Veterans for Peace and the National Campaign for Nonviolent Resistance, to coincide with the U.N. Day of Observance on War and the Environment, in a protest that included a silent vigil and a “die-in.”

“The Pentagon is the single biggest consumer of fossil fuels in the entire world,” said Army veteran and VFP and NCNR member Ellen Barfield.

“So protesting climate change and extreme energy recovery at drilling sites and so-called regulatory agencies is not enough. War, even just training for it, is of course massively destructive and wasteful. War is bad for the environment. Today, the 6th of November, is the United Nations day to acknowledge that fact every year and to call for the prevention of  what it calls the exploitation of the environment in war. Sadly though, UN admonitions have little effect on U.S. foreign policy. The very fracked gas Beyond Extreme Energy activists are protesting this week is being used as an economic weapon by the Obama administration, threatening Russian gas exports to Europe through Ukrainian pipelines.”

Finally, on Friday, the protestors concluded with a blockade while families from Pennsylvania with talk about the impact fracking has had on their homes and communities.

In addition to the blockades, protests and sit-ins at FERC headquarters, protests have taken place at Cove Point where FERC approved Maryland’s Dominion Cove Point natural gas export facility located close to residential communities, at the Justice Department and the Department of Transportation, and at the headquarters of National Public Radio (NPR) to protest its ads from the oil and gas industries.

“In exchange for an undisclosed sum of money, NPR hosts like Steve Inskeep, Audie Cornish and Melissa Block routinely read misleading and outright false statements that encourage listeners to ‘think about’ the benefits of fracked gas,” explained Hudson. “Not only are these ads offensive and inappropriate on public radio, they take up valuable air time at a moment that NPR has decided to cut it’s energy and environment reporting staff by 80 percent.”

“Just as the media have rejected money from the tobacco industry … so should they reject these donations from fossil fuels,” said Josh Fox, director of Gasland.

While the Week of Action may be over, environmental groups aren’t planning to let up. On Monday, a group called Stopping Exports and Extraction Destruction (SEED) will hold apeaceful protest near the Cove Point facility.

Watch this video by Robert Brune of DC Media Group of the first day of actions at FERC headquarters: