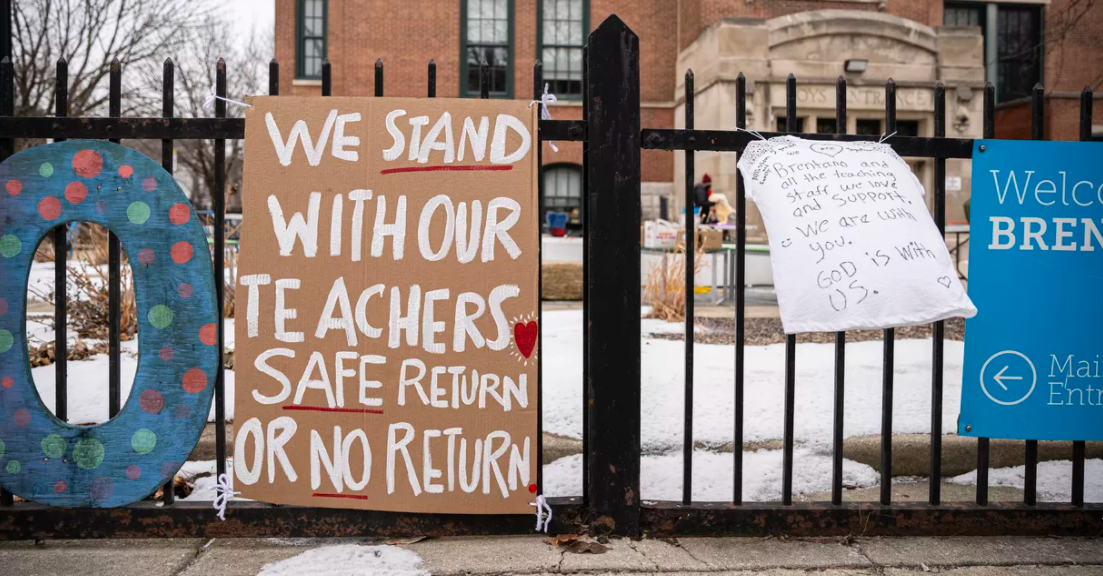 Above photo: Banners in support of the elementary school teachers hang outside Brentano Elementary School as teachers instruct virtual classes during a protest against returning to in-person teaching. Anthony Vazquez/Sun-Times.

CPS CEO Janice Jackson said those who continue to ignore their orders will face progressive discipline, but that it’s in nobody’s interest to fire teachers.

About 40% of Chicago Public Schools teachers and staff who were expected to report to schools Monday for the first time during the pandemic didn’t show up for in-person work, officials said Tuesday, accusing the Chicago Teachers Union of pressuring its members to defy the district’s orders.

In all, about half of teachers and three-quarters of school-based support staff in preschool and special education cluster programs returned to classrooms as expected, accounting for 60% of those 4,400 employees scheduled to go back to specific schools, the district announced. Officials didn’t immediately provide data on another estimated 1,400 employees that were supposed to return but work at more than one school. The first two days after winter break last school year saw about 83% of employees present.

In a sign of the increasing tension between the school system and the teachers union, CPS CEO Janice Jackson said Tuesday that the number of employees who reported to work was “significant considering the fact that they were pressured by the union not to return.”

Those who didn’t show up and elected to continue teaching remotely were sent emails telling them their absence was unexcused. Jackson said those who continue to ignore their orders will face progressive discipline according to the union contract, but that it’s in nobody’s interest to fire teachers.

“We are optimistic that more staff will report to work in the coming days,” Jackson said, though indications from the staff suggested otherwise.

In a morning news conference with reporters, Troy LaRaviere, president of the Chicago Principals and Administrators Association, said principals are looking for more input on the district’s reopening plan. A survey of 300 principals and assistant principals conducted this week found only 29% felt they’d received enough support from the district, and only 17% agreed that opening in January or February was the right decision, LaRaviere said.

CTU President Jesse Sharkey said on the same call that “there are a tremendous amount of concerns and many of our members are not feeling safe at all, are feeling more anxious and scared than ever.” Those who were no-shows Monday cited health and safety concerns and a lack of trust in the school district’s coronavirus mitigation protocols.

In a survey conducted by the union, 69% of members who did return reported conditions in schools that were “not adequate,” Sharkey said. Among staff concerns, Sharkey said, were “filthy” buildings, those in “various states of disrepair” and either missing or inadequate air purifiers.

But in a separate news conference Tuesday, Mayor Lori Lightfoot urged those outside the school system to go see for themselves what measures have been put in place.

Lightfoot said CPS, working with the Chicago Department of Public Health, has “gone over and above” what’s been done at private, charter and area Catholic schools.

She also said she understands teacher concerns, and that’s why, she said, there have been “49 meetings and counting” with union leadership.

But Sharkey said the reopening won’t work if “the district simply continues to dictate to us.”

He called for solutions that include making mass coronavirus testing available; having a ventilation standard and a way to test it; a “clear” mask policy, telling teachers what to do if a student doesn’t bring a mask or refuses to wear one; consider delaying the start of school and “let the vaccinations proceed and then figure out a way to extend school, with a robust summer program or an extended year.”

City official: ‘Things are getting better’

Dr. Marielle Fricchione, medical director in the Chicago Department of Public Health’s COVID bureau, said at CPS’ news conference that the department “is fully in support of the reopening plan.”

“We encourage teachers to ask as many questions as they need, but we also have to acknowledge that walking out the door is not a zero-risk proposition in a pandemic, and things are getting better overall for our city,” Fricchione said.

“Things are getting better, and the option for public education is the right thing for children and families right now. And as we engage in this new year together, we have more and more data every day that we will continue to share with the district.”

Jackson, the schools chief, also defended against claims that the district’s plan would deepen existing racial and socioeconomic inequities.

Though Jackson and Lightfoot have said reopening schools is about providing a better option to Black and Latino students who have had a tougher time accessing remote learning, only one-third of Black and Latino and a third of low-income families opted to return to classrooms while two-thirds of white families chose to go back.

The result, educators and families have said, is that teachers will have to split their focus between the classroom and the students who are still in e-learning, where most students of color will still be.

“That’s why this point around white parents is fascinating to me,” Jackson continued. “Number one, white parents opting in at a higher rate for in-person instruction does not nullify our obligation to be responsive to the data that we’re seeing and how it’s impacting Black and Latino families.

“We cannot sit back and allow a generation to just falter because of made up reasons around why we can’t do reopening,” Jackson said. “A year from now, there’s going to be a reckoning around what happened to those students that have been sitting at home, not being properly served because many of them have families who have to be essential workers.”

Jackson ended the press briefing with more heated remarks about “the intentions behind” a letter sent to her and Mayor Lori Lightfoot this week by 36 aldermen — a majority of City Council — who said they’re “deeply concerned” with the district’s plan.

“I also think it’s important to challenge the hypocrisy from some of them who have children who have been going to school. They have children in Catholic schools who have been accessing that, but yet they’re making decisions or influencing the decisions of other people. … When it’s purely political, or just a distraction, I think people need to be called out for that hypocrisy.”