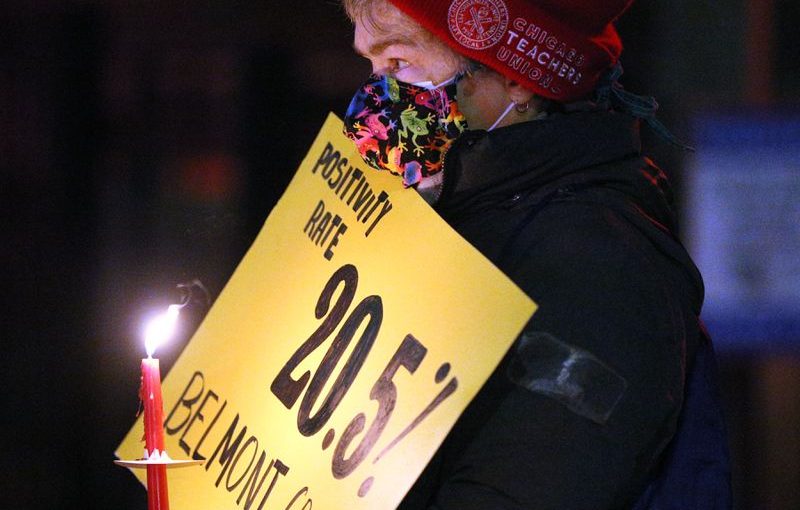 Above photo: Retired teacher Norine Gutekanst attends a CTU vigil last month for staff and students affected by COVID-19. The CTU has announced its members due back to schools Monday won’t show up. Terrence Antonio James/Chicago Tribune.

Say they will teach remotely ‘until buildings are safe.’

The Chicago Teachers Union says some of its members are choosing not to return to school buildings on Monday, in defiance of Chicago Public Schools’ reopening plans.

The union said Sunday it is “rejecting CPS’ effort to force thousands more back into unsafe buildings beginning this Monday” and that teachers intend to continue providing their lessons remotely “until buildings are safe” for them and for students.

Additionally, more than 30 aldermen signed on to a letter sent Sunday to Mayor Lori Lightfoot and Chicago Public Schools CEO Janice Jackson, saying they were “deeply concerned” that the reopening plan does not meet the district’s equity objectives and fails to address some safety concerns.

Prekindergarten and some special education teachers are due to return to school buildings on Monday, with their students to follow on Jan. 11. It would be the first in-person classes in CPS since Gov. J.B. Pritzker closed schools statewide in March when the coronavirus began to circulate.

“CPS wants to force pre-K and special education cluster teachers back into buildings on Monday, six days before Chicago Mayor Lori Lightfoot’s most recent stay-at-home order expires — and before health professionals can gauge any additional post-holiday risk of spread,” the union said.

Union officials said that some members might show up for work on Monday but that the union will provide legal and other support to those who choose not to return.

The union said it plans to hold a “public teach-in” at Brentano Elementary on Monday afternoon “about why reopening now without guaranteed safety protocols is dangerous for students, families and school staff.”

CTU, which went on strike in 2019, also said members and supporters “will stage a series of actions and forums during the week to raise awareness about persistent safety issues in schools.”

In the letter signed by the majority of the City Council, aldermen said they recognize the “unique and significant challenges” posed by the pandemic, but they are “deeply concerned that Chicago Public Schools’ current plan for students and staff to return to school buildings does not meet the district’s objective of increasing equity for students, and fails to adequately address a number of safety concerns identified by parents, students, and staff in light of the ongoing pandemic.”

According to the letter, in the last CPS survey, less than a quarter of families chose in-person learning, and white families said they planned for their children to return to schools at twice the rate of Black and Latino families.

The aldermen asked CPS to take nine steps for a safe return to schools, including establishing and promoting clear public health criteria, improving internet access and providing timely and transparent decisions on accommodations.

”A successful reopening plan must inspire public trust through transparency, communication, and collaboration,” the letter said. “To that end, CPS needs true buy-in from and collaboration with parents, communities, and organized labor. We believe that CPS can achieve this, and stand ready to assist however we can.”

CPS and city officials have pushed back reopening plans multiple times but have said their phased-in plan, which would have the bulk of kindergarten through eighth graders returning on Feb. 1 for parents who choose that option, is a cautious approach with many health safeguards in place. They also say remote learning has disproportionately hurt Black and Latino students, though the union has countered that communities of color have also been affected the most by the COVID-19 pandemic.

In a Sunday statement, CPS maintained schools can reopen safely.

“The CTU has not identified any area where the district’s plan falls short of public health guidelines and the CTU’s last-minute tactics are deeply disrespectful to the 77,000 mostly Black and Latinx families who selected in-person learning,” said spokeswoman Emily Bolton. “It is the district’s expectation that teachers without an accommodation report to work tomorrow, just as principals, custodial staff, engineers, and food service staff have throughout the entirety of the pandemic.”

Additionally, CPS responded to the aldermen’s letter with its own nine-page letter from Jackson, saying they must do everything they can to make in-person learning a reality for students who want to return to schools and including a list of health and safety policies in place for reopening.

“Families who attend private and parochial schools in your communities have had this option for months, and providing this option is a matter of equity that will have ramifications for years to come,” the letter said. “In-person learning is not the right choice for every student, but it must be an option for all.”

The letter addressed the concerns outlined in the aldermen’s letter, and cited shifting metrics on reopening and studies that do not show a link between school reopening and infection rates.

“The unfortunate fact is that despite our best efforts and the heroic work of teachers to make remote instruction effective for CPS students, it is a poor substitute for in-person learning for many of our most vulnerable students,” the letter said.

A union attorney, Thad Goodchild, said last week that members have a right to work in a safe environment.

“We expect a lot of members will invoke that right,” he said, adding. “This isn’t a strike. We haven’t called for a strike. We’re not saying we’re refusing to work … (we’re) willing and available to continue working remotely” until safety concerns are addressed.

He continued: “If CPS responds by taking draconian measures, that could result in our entire membership deciding they want to engage in a work stoppage.”