Yemen: US Grants Approval For Genocide

Note: Thirty-three members of Congress signed a bipartisan letter calling on Secretary of Defense James Mattis to stop a disastrous military assault by Saudi Arabia and the United Arab Emirates on Hodeida, Yemen’s major port city. In the letter, Members called for the U.S. to reject providing logistical, military, and diplomatic support for the Saudi-led coalition’s operation, as well as to disclose the full scope of the U.S. involvement in the Saudi-led war.

“We urge you to use all available means to avert a catastrophic military assault on Yemen’s major port city of Hodeida by the Saudi-led coalition, and to present Congress with immediate clarification regarding the full scope of U.S. military involvement in that conflict,” wrote the Members. “We remind you that three years into the conflict, active U.S. participation in Saudi-led hostilities against Yemen’s Houthis has never been authorized by Congress, in violation of the Constitution.” – KZ

The genocide in Yemen is going to start tomorrow. Eight million are already on the brink of starvation. Eighteen out of twenty-six million Yemenis live in the mountainous heartlands (green) which are under control of the Houthi and their allies. They are surrounded by Saudi and U.A.E. forces and their mercenaries. There is little agriculture. The only supply line from the outside world will soon be cut off. The people will starve. 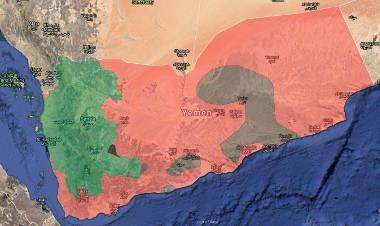 Even before the war Yemen imported 90% of its staple food. Three years of Saudi/UAE bombing have destroyed local infrastructure and production. The ongoing war has already caused mass starvation and the outbreak of a large cholera epidemic. The Yemeni coast is under blockade by Saudi and U.S. naval forces. The only supplies coming in are UN and commercial deliveries through the Red Sea Hodeidah port (Al Hudaydah on the map). 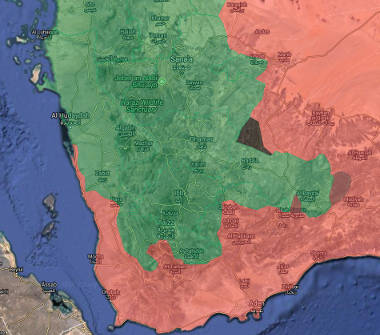 The United Arab Emirates is leading local mercenaries and Islamist gangs against the Houthi and their allies. During the last months these forces moved from the south along the coast up to Hodeidah. The fighting is fierce:

Heavy fighting in Yemen between pro-government forces and Shiite rebels has killed more than 600 people on both sides in recent days, security officials said Monday.

Tomorrow, when the media will be busy with the Kim-Trump photo-op summit, the UAE forces will launch their attack on the city.

The UN, which oversees the aid distribution through Hodeidah, tried to negotiate between the parties:

The U.N. special envoy for Yemen, Martin Griffiths, traveled to the U.A.E. capital over the weekend in an effort to forestall an attack. Mr. Griffiths had secured an agreement with Houthi rebels who control Hodeidah to allow the U.N. to operate the port jointly, the people said. But people briefed on the discussions said they doubted the U.A.E. would accept the offer or delay the planned assault.

The briefed people were right. The UN is now evacuating its staff:

The United Nations was withdrawing its staff on Monday from the besieged Yemeni port city of Al Hudaydah, after member countries were told that an attack by forces led by the United Arab Emirates was imminent, according to two diplomats briefed on the matter.
…
The International Committee for the Red Cross removed its staff from the city over the weekend.
…
Diplomats in the region say they believe that only more pressure from Washington will stop the planned assault.

The U.S., through its Secretary of State Pompeo, just gave a green light to the UAE to launch its attack:

The United States is closely following developments in Hudaydah, Yemen. I have spoken with Emirati leaders and made clear our desire to address their security concerns while preserving the free flow of humanitarian aid and life-saving commercial imports. We expect all parties to honor their commitments to work with the UN Office of the Special Envoy of the Secretary General for Yemen on this issue, support a political process to resolve this conflict, ensure humanitarian access to the Yemeni people, and map a stable political future for Yemen.

Neither the Emirates nor the Saudis have any interest in letting humanitarian aid flow. They are absolutely ruthless. Earlier today they bombed a Cholera treatment center run by Doctors Without Borders:

MSF Yemen @msf_yemen – 10:29 UTC – 11 Jun 2018
“This morning´s attack on an @MSF cholera treatment centre in Abs by the Saudi and Emirati-led coalition shows complete disrespect for medical facilities and patients. Whether intentional or a result of negligence, it is totally unacceptable.” 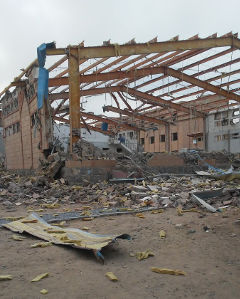 NRC has provided all relevant parties to the conflict, including the Saudi-led Coalition, with details and coordinates on our operations in order to ensure the safety of our staff.

Hodeidah, with 600,000 regular inhabitants and hundred thousands of refugees, will be difficult to conquer. No supplies will flow through the port while the fight is ongoing. Should the UAE forces be able to take the port they are unlikely to allow aid to pass towards the Houthi controlled areas. There will be a huge famine, hundred thousands if not millions will die.

It would be easy for the Trump administration to stop the UAE attack. U.S. special forces are on the ground in Yemen working closely with UAE forces. U.S. planes are refueling the Saudi and UAE bombers. U.S. intelligence is used in the targeting process. The U.S. supplies the bombs. Without U.S. air-to-air refueling there would be no air-support for the UAE fighters on the ground. They would be unable to launch their attack.

From its very beginning the Trump administration has been extremely close (long read) with the Israeli, Emirati and Saudi rulers. Their common aim is to counter Iran. But Iran is hardly involved in Yemen:

Claims of Iran’s influence over the Houthis have been overblown. While the Houthis do receive some support from Iran, it is mostly political, with minimal financial and military assistance. However, since the Houthis took control of Sanaa, the group has increasingly been portrayed as “Iran-backed” or “Shia,” often suggesting a sectarian relationship with the Islamic Republic. Yet until after the 2011 upheavals, the term “Shia” was not used in the Yemeni public to refer to any Yemeni groups or individuals. The Houthis do not follow the Twelver Shia tradition predominant in Iran, but adhere to the Zaidiya, which in practice is closer to Sunni Islam, and had expressed no solidarity with other Shia communities.

The Saudis see the Zaidiya as an impediment of their influence in Yemen. They want to control the Yemeni government. The Emirates want to control the port of Aden and Yemen’s the oil and gas loading facilities. The Obama administration supported the Saudi onslaught on Yemen to buy Saudi acquiescence with the nuclear deal with Iran. The Trump administration supports the Saudi/UAE war out of lack of knowledge. It has fallen for the Iran myth. It also wants to sell more weapons.

Millions of kids and grown ups will have to pay for this with their lives.