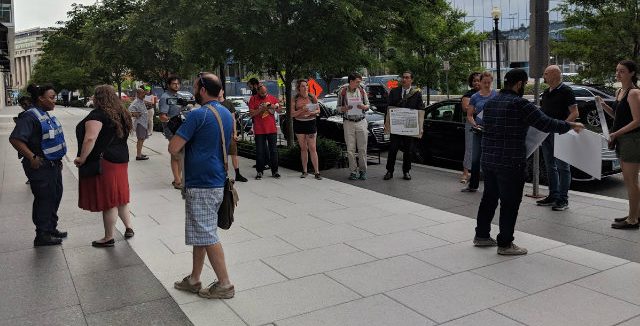 Above Photo: Protesters played audio of crying children and handed out flyers to White House senior adviser Stephen Miller’s neighbors and tourists visiting the glitzy development where he lives. (Photo by Rachel Sadon)

While focusing protests on individuals is controversial, Popular Resistance supports holding nonviolent protests against individuals who are decision makers and key officials in carrying out racist and unjust policies. Home protests are controversial in the mainstream corporate media these days but they are an essential tool from activists and we should not be cowered from using the tactic at appropriate times.

We used such tactics when we were advocating for net neutrality and President Obama’s chair of the FCC, Tom Wheeler, opposed net neutrality. At a key moment in the campaign we blocked his driveway and handed out fliers in his Georgetown neighborhood. We did the same thing when Trump’s FCC chairman, Ajit Pai began the process of undoing net neutrality.

We also joined with Beyond Extreme Energy when they protested at the homes of commissioners of the Federal Energy Regulatory Commission against their consistent approval of oil and gas infrastructure.

During the campaign to stop the Trans-Pacific Partnership we focused on Senator Ron Wyden (D-OR), we not only protested in his office with multiple day sit-ins, but we also protested at his New York City home while Oregonians protested at Wyden’s home in Oregon.

Our allies at CODE PINK conducted a “torture tour” that not only went to the CIA headquarters but also to the homes of Dick Cheney and CIA director John Brennan. They also protested at John Kerry’s home over Israel’s slaughter of Palestinians in Gaza. Twenty climate justice activists were arrested protesting at Kerry’s Georgetown home demanding he stop the Enbridge Pipeline from bringing Tar Sands into the United States. John Kerry was also protested outside of his Boston home by people calling for no war on Syria.

During During Occupy Wall Street, activists held a “Millionaires March” going to the Upper East Side homes of Rupert Murdoch, Jaime Dimon and David Koch, among others, to urge that they be made to pay their fair share in taxes. They chanted “We Are at Your House,” “Banks Got Bailed Out, We Got Sold Out” and protested the expiration of a New York’s millionaire’s tax that would produce a $5 billion tax break for the wealthiest. This got lots of positive media coverage.

These are just a few examples of many. As personal accountablility is an important tool of political movements.

We support the protests against Trump administration officials like Homeland Security director Kirstjen Nielsen outside her home and when she was having dinner at a Mexican restaurant. We also supported protests focused President Obama when he was the deporter-in-chief. We also support the protest of Sarah Huckabee Sanders which led to her being forced to leave a restaurant with her family because of her role in the Trump administration.

Stephen Miller is the alt-right architect of the hard line immigration approach of the Trump administration. We were pleased to see him protested when he went to a Mexican restaurant for dinner and also pleased he was protested at his expensive condominium in Washington, DC as the article below discusses.

“Say it loud, say it clear: immigrants are welcome here,” shouts a group of about a dozen people outside Stephen Miller’s apartment building in DC. #civility pic.twitter.com/gLVHCAwvwf

They are handing out these flyers to Stephen Miller’s neighbors at the luxe CityCenterDC pic.twitter.com/OYmllt6JEj

While such protests are controversial and therefore must be carefully planned and executed, we see holding public officials personally accountable as an essential tactic. Officials need to know that they will be confronted for their actions where they live, work, eat dinner and even in front of their families as an essential tactic at appropriate moments. Saul Alinsky, author or Rules for Radicals, pointed out “any effective means is automatically judged by the opposition as being unethical.” Bringing protests to their home ensures they feel public anger,produces shame and ostracizing in their social group. Everyone around them knows what they have done and where they live. Such protests should be part of a campaign of escalation on policy issues as it becomes evident that key officials are not listening to public concerns. KZ and MF

“Say it loud, say it clear: immigrants are welcome here,” chanted a group of about dozen people standing on the public sidewalk as residents whisked through revolving doors and tourists sauntered around the 10-acre downtown development.

The protesters played an audio recording obtained by ProPublica of sobbing children as they were separated from their parents by border patrol agents and handed out a series of flyers. One, in the style of a wanted poster, called Miller a “white nationalist, Trump lackey, and architect of both the Muslim ban.”

The group outside Miller’s apartment wasn’t affiliated with any particular organization. “We’re just a bunch of friends and local advocates who really feel unified in our disgust and think the time for polite politics is over,” said Jesse, an organizer and one of several participants who requested that we use only their first name out of fear of being doxxed.

The protest came on the heels of several other high-profile confrontations with Trump administration officials in recent days, including an incident where White House Press Secretary Sarah Huckabee Sanders was asked to leave the Red Hen restaurant in Lexington, Virginia over the weekend and demonstrators marching outside of Department of Homeland Security Kristjen Nielsen’s home in Alexandria on Friday morning.

These flashpoints have given rise to heated exchanges about the role of civility in the current political climate. Representative Maxine Waters, D-Calif, fanned the flames, telling rallygoers over the weekend “if you see anybody from that cabinet in a restaurant, in a department store, at a gasoline station, you get out and you create a crowd and you push back on them, and you tell them they’re not welcome anymore, anywhere.” President Donald Trump responded by calling Waters an “an extraordinarily low IQ person” and saying she should “be careful” what she wishes for.

While Miller didn’t personally appear outside his apartment on Monday night—he was traveling with Trump to a campaign rally in South Carolina—several protesters said their actions were more about making neighbors aware that the White House official lives there and plays a key role in policies they oppose.

“We want to make sure his neighbors know. These aren’t D.C. values,” said Ahmad, a demonstrator who also declined to give his last name after a prior experience being identified at a protest of a Trump administration official and subsequently being harassed online. “The debate about civility is facile. There are babies in cages in detention.”

The response from passersby, many of whom were tourists, included cheers and messages of support as well as angry retorts from people on both sides of the political aisle.

Jason Feer, who was in D.C. to visit his daughter, an American University student, told DCist that he agrees with the message but not the delivery.

“[Miller] is a monster, but this is wrong. You shouldn’t be chasing people down at home or in restaurants,” he said, in between bites of a frozen custard from Rita’s. “Everyone is vulnerable to this. What if you’re pro-choice?”

Another pedestrian who stopped to watch the proceedings, a Maryland resident who had just left happy hour and didn’t want to be identified for employment reasons, made the same argument. “It’s a tough situation,” he said. “I appreciate strong emotions. On the one side, you have a voice of dissent. But you also wouldn’t want the script flipped.”

One Trump voter, who was visiting D.C. from St. Louis on business, called the tactic of showing up to Miller’s home “aggressive”

“We’re all in this together. We’re all Americans. I wish there was more openness to discussion,” said Joe, declining to give his last name.

Still, others were delighted to see direct action against a Trump administration official, and at least one person even joined in off the street.

Avis Standing Horse, who is visiting from Missoula, Montana, had been planning to spend the evening on a “cheesy tour bus.” After missing the window to board, she went for a walk and stumbled on the protest. Within a few minutes, she was handing out flyers and asking other passersby to oppose Miller: “If not us, who?”

“We’ve written letters, made phone calls—I know I have. We have to shame them. It’s come to that,” Standing Horse said, noting that, as a member of the Cree Indian tribe, she was likely the only person in the vicinity who wasn’t an immigrant or descended from one.

As for the actual residents of CityCenterDC, most seemed unperturbed.

One man, who declined to be identified, said he has lived in the upscale complex since it opened. “As someone who is the descendant of Holocaust survivors, I have some sharp feelings … You don’t expect anyone like that to live in your home,” he said. He didn’t begrudge the protesters, saying if it was happening somewhere else, he might have even joined in. But despite occasionally running into Miller in hallways and the elevator, he’s never said anything to the White House adviser.

That’s the moment that Valerie Ploumpis, the national policy director for Equality California and a three year resident of CityCenterDC, is waiting for.

“I’ve been looking for him in the lobby,” Ploumpis said, adding some colorful details about the piece of her mind she plans to give her neighbor, whom she calls a “raging racist.” As she returned from grocery shopping, though, Ploumpis seized an unexpected opportunity: grabbing some of the group’s flyers, borrowing some tape, and affixing them to the building’s elevators.

CityCenterDC resident Valerie Ploumpis took the posters, borrowed some tape, and put them up in the elevator pic.twitter.com/yNrspCU8qB

Miller bought his two-bedroom CityCenterDC condo in 2014 for $973,000 (the purchaser is a company with the same address as his father’s real estate company), according to property records obtained by the Washington Post. The glitzy development boasts the rarefied likes of Gucci, Louis Vuitton, and Salvatore Ferragamo stores.

After spending some time at one of the complex’s entrances, protesters paraded through the courtyard, which is bedecked in fairy lights and an installation of inflatable balls, and passed out flyers to outdoor diners enjoying the comfortable-by-D.C.-summer-standards weather. “Stephen Miller, you’re a villain, locking up immigrant children,” they shouted.

The group did not attempt to enter any of the buildings and was not stopped by either Metropolitan Police Department officers or private security guards.

It’s not the first time that Miller has been the target of a public incident recently. While dining in Shaw’s Espita Mezcaleria last week, a protester called the White House senior adviser a fascist, the New York Post reported.

Jesse was at that confrontation, too. “I think that the whole administration needs to be put on notice,” he said. “As long as they are enacting policies of white supremacy and xenophobia, they are not welcome in our city.”